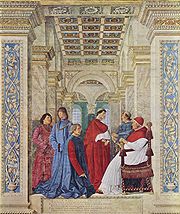 The Vatican Library is the library
Library
In a traditional sense, a library is a large collection of books, and can refer to the place in which the collection is housed. Today, the term can refer to any collection, including digital sources, resources, and services...
of the Holy See
Holy See
The Holy See is the episcopal jurisdiction of the Catholic Church in Rome, in which its Bishop is commonly known as the Pope. It is the preeminent episcopal see of the Catholic Church, forming the central government of the Church. As such, diplomatically, and in other spheres the Holy See acts and...
, currently located in Vatican City
Vatican City
Vatican City , or Vatican City State, in Italian officially Stato della Città del Vaticano , which translates literally as State of the City of the Vatican, is a landlocked sovereign city-state whose territory consists of a walled enclave within the city of Rome, Italy. It has an area of...
. It is one of the oldest libraries in the world and contains one of the most significant collections of historical texts. Formally established in 1475, though in fact much older, it has 75,000 codices
Codex
A codex is a book in the format used for modern books, with multiple quires or gatherings typically bound together and given a cover.Developed by the Romans from wooden writing tablets, its gradual replacement...
from throughout history. From July 2007, the library had been temporarily closed to the public for rebuilding, and reopened in September 2010.

Scholars have traditionally divided the history of the library into five periods.

Pope Nicholas V
Pope Nicholas V
Pope Nicholas V , born Tommaso Parentucelli, was Pope from March 6, 1447 to his death in 1455.-Biography:He was born at Sarzana, Liguria, where his father was a physician...
established the library in the Vatican in 1448 by combining some 350 Greek, Latin and Hebrew codices
Codex
A codex is a book in the format used for modern books, with multiple quires or gatherings typically bound together and given a cover.Developed by the Romans from wooden writing tablets, its gradual replacement...
inherited from his predecessors with his own collection and extensive acquisitions, among them manuscripts from the imperial Library of Constantinople
Library of Constantinople
The Imperial Library of Constantinople, in the capital city of the Byzantine Empire, was the last of the great libraries of the ancient world. Long after the destruction of the Great Library of Alexandria and the other ancient libraries, it preserved the knowledge of the ancient Greeks and Romans...
. The Biblioteca Apostolica Vaticana was established in 1475.

When its first librarian, Bartolomeo Platina
Bartolomeo Platina
Bartolomeo Platina, originally named Sacchi was an Italian Renaissance writer.-Biography:Platina was born at Piadena , near Cremona....
, produced a listing in 1481, the library held over 3,500 items, making it by far the largest in the Western world. Around 1587, Pope Sixtus V
Pope Sixtus V
Pope Sixtus V , born Felice Peretti di Montalto, was Pope from 1585 to 1590.-Early life:The chronicler Andrija Zmajević states that Felice's family originated from modern-day Montenegro...
commissioned the architect Domenico Fontana
Domenico Fontana
Domenico Fontana was a Swiss-born Italian architect of the late Renaissance.-Biography:200px|thumb|Fountain of Moses in Rome....
to construct a new building for the library; it is still in use today. Books were displayed on benches to which they were chained. 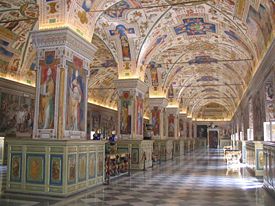 The library was enriched by several bequests and acquisitions over the centuries.

In 1623, the hereditary Palatine Library of Heidelberg
Heidelberg
-Early history:Between 600,000 and 200,000 years ago, "Heidelberg Man" died at nearby Mauer. His jaw bone was discovered in 1907; with scientific dating, his remains were determined to be the earliest evidence of human life in Europe. In the 5th century BC, a Celtic fortress of refuge and place of...
containing about 3,500 manuscripts was given to the Vatican by Maximilian I, Duke of Bavaria (who had just acquired it as booty in the Thirty Years' War
Thirty Years' War
The Thirty Years' War was fought primarily in what is now Germany, and at various points involved most countries in Europe. It was one of the most destructive conflicts in European history....
) in thanks for the adroit political maneuvers of Pope Gregory XV
Pope Gregory XV
Pope Gregory XV , born Alessandro Ludovisi, was pope from 1621, succeeding Paul V on 9 February 1621...
that had sustained him in his contests with Protestant candidates for the electoral seat. A token 39 of the Heidelberg manuscripts were sent to Paris
Paris
Paris is the capital and largest city in France, situated on the river Seine, in northern France, at the heart of the Île-de-France region...
in 1797 and were returned to Heidelberg at the Peace of Paris
Treaty of Paris (1815)
Treaty of Paris of 1815, was signed on 20 November 1815 following the defeat and second abdication of Napoleon Bonaparte. In February, Napoleon had escaped from his exile on Elba; he entered Paris on 20 March, beginning the Hundred Days of his restored rule. Four days after France's defeat in the...
in 1815, and a gift from Pope Pius VII
Pope Pius VII
Pope Pius VII , born Barnaba Niccolò Maria Luigi Chiaramonti, was a monk, theologian and bishop, who reigned as Pope from 14 March 1800 to 20 August 1823.-Early life:...
of 852 others was made in 1816 to the University of Heidelberg, including the Codex Manesse
Codex Manesse
The Codex Manesse, Manesse Codex, or Große Heidelberger Liederhandschrift is a Liederhandschrift , the single most comprehensive source of Middle High German Minnesang poetry, written and illustrated between ca. 1304 when the main part was completed, and ca...
. Aside from that, the Palatine Library remains in the Vatican Library to this day.

In 1657, the manuscripts of the Dukes of Urbino
Urbino
Urbino is a walled city in the Marche region of Italy, south-west of Pesaro, a World Heritage Site notable for a remarkable historical legacy of independent Renaissance culture, especially under the patronage of Federico da Montefeltro, duke of Urbino from 1444 to 1482...
were acquired. In 1661, the Greek scholar Leo Allatius
Leo Allatius
Leo Allatius was a Greek scholar, theologian and keeper of the Vatican library....
was made librarian.

Queen Christina of Sweden
Christina of Sweden
Christina , later adopted the name Christina Alexandra, was Queen regnant of Swedes, Goths and Vandals, Grand Princess of Finland, and Duchess of Ingria, Estonia, Livonia and Karelia, from 1633 to 1654. She was the only surviving legitimate child of King Gustav II Adolph and his wife Maria Eleonora...
's important library (mostly amassed by her generals as booty from Habsburg Prague
Prague
Prague is the capital and largest city of the Czech Republic. Situated in the north-west of the country on the Vltava river, the city is home to about 1.3 million people, while its metropolitan area is estimated to have a population of over 2.3 million...
and German cities during the Thirty Years War) was bought by Pope Alexander VIII
Pope Alexander VIII
Pope Alexander VIII , born Pietro Vito Ottoboni, was Pope from 1689 to 1691.-Early life:Pietro Ottoboni was born of a noble Venetian family, and was the son of Marco Ottoboni, chancellor of the Republic of Venice...
on her death in 1689. It represented, for all practical purposes, the entire royal library of Sweden at the time. If it had remained where it was in Stockholm
Stockholm
Stockholm is the capital and the largest city of Sweden and constitutes the most populated urban area in Scandinavia. Stockholm is the most populous city in Sweden, with a population of 851,155 in the municipality , 1.37 million in the urban area , and around 2.1 million in the metropolitan area...
, it would all have been lost in the destruction of the royal palace by fire in 1697.

Today, the library holds some 75,000 manuscripts and over 1.1 million printed books, which include some 8,500 incunabula
Incunabulum
Incunable, or sometimes incunabulum is a book, pamphlet, or broadside, that was printed — not handwritten — before the year 1501 in Europe...
. The Vatican Secret Archives
Vatican Secret Archives
The Vatican Secret Archives , located in Vatican City, is the central repository for all of the acts promulgated by the Holy See. The Pope of the Roman Catholic Church, having primal incumbency until death, owns the archives until the next appointed Papal successor...
were separated from the library at the beginning of the 17th century; they contain another 150,000 items.

Among the most famous holdings of the library is the Codex Vaticanus Graecus 1209, the oldest known nearly complete manuscript of the Bible
Bible
The Bible refers to any one of the collections of the primary religious texts of Judaism and Christianity. There is no common version of the Bible, as the individual books , their contents and their order vary among denominations...
. The Secret History of Procopius
Procopius
Procopius of Caesarea was a prominent Byzantine scholar from Palestine. Accompanying the general Belisarius in the wars of the Emperor Justinian I, he became the principal historian of the 6th century, writing the Wars of Justinian, the Buildings of Justinian and the celebrated Secret History...
was discovered in the library and published in 1623.

The Vatican Library is a research library for history, law, philosophy, science and theology, open to anyone who can document their qualifications and their research needs to view the collection. Photocopies for private study of pages from books published between 1801 and 1990 can be requested in person or by mail.

A School of Library Science
Library science
Library science is an interdisciplinary or multidisciplinary field that applies the practices, perspectives, and tools of management, information technology, education, and other areas to libraries; the collection, organization, preservation, and dissemination of information resources; and the...
is associated with the Vatican Library. 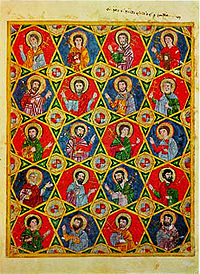 Notable manuscripts in the Library include: