Encyclopedia
United Nations trust territories were the successors of the remaining League of Nations mandate
League of Nations mandate
A League of Nations mandate was a legal status for certain territories transferred from the control of one country to another following World War I, or the legal instruments that contained the internationally agreed-upon terms for administering the territory on behalf of the League...
s and came into being when the League of Nations
League of Nations
The League of Nations was an intergovernmental organization founded as a result of the Paris Peace Conference that ended the First World War. It was the first permanent international organization whose principal mission was to maintain world peace...
ceased to exist in 1946. All of the trust territories were administered through the UN Trusteeship Council. The one territory not turned over was South West Africa
South West Africa
South-West Africa was the name that was used for the modern day Republic of Namibia during the earlier eras when the territory was controlled by the German Empire and later by South Africa....
, which South Africa
South Africa
The Republic of South Africa is a country in southern Africa. Located at the southern tip of Africa, it is divided into nine provinces, with of coastline on the Atlantic and Indian oceans...
insisted remained under the League of Nations Mandate, and which eventually gained independence in 1990 as Namibia
Namibia
Namibia, officially the Republic of Namibia , is a country in southern Africa whose western border is the Atlantic Ocean. It shares land borders with Angola and Zambia to the north, Botswana to the east and South Africa to the south and east. It gained independence from South Africa on 21 March...
. The main objection was that the trust territory guidelines required that the lands be prepared for independence and majority rule
Majority rule
Majority rule is a decision rule that selects alternatives which have a majority, that is, more than half the votes. It is the binary decision rule used most often in influential decision-making bodies, including the legislatures of democratic nations...
.

All these territories previously were League of Nations mandates. 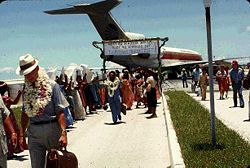 These territories were also former League of Nations mandates.