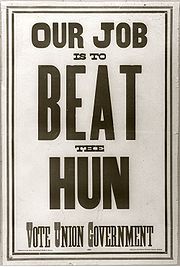 The Unionist Party was formed in 1917 by Members of Parliament
Member of Parliament
A Member of Parliament is a representative of the voters to a :parliament. In many countries with bicameral parliaments, the term applies specifically to members of the lower house, as upper houses often have a different title, such as senate, and thus also have different titles for its members,...
(MPs) in Canada
Canada
Canada is a North American country consisting of ten provinces and three territories. Located in the northern part of the continent, it extends from the Atlantic Ocean in the east to the Pacific Ocean in the west, and northward into the Arctic Ocean...
who supported the "Union government" formed by Sir Robert Borden during the First World War.

In May 1917, Conservative
Conservative Party of Canada (historical)
The Conservative Party of Canada has gone by a variety of names over the years since Canadian Confederation. Initially known as the "Liberal-Conservative Party", it dropped "Liberal" from its name in 1873, although many of its candidates continued to use this name.As a result of World War I and the...
Prime Minister
Prime Minister of Canada
The Prime Minister of Canada is the primary minister of the Crown, chairman of the Cabinet, and thus head of government for Canada, charged with advising the Canadian monarch or viceroy on the exercise of the executive powers vested in them by the constitution...
Borden proposed the formation of a national unity government
National unity government
A national unity government, government of national unity, or national union government is a broad coalition government consisting of all parties in the legislature, usually formed during a time of war or other national emergency.- Canada :During World War I the Conservative government of Sir...
or coalition government
Coalition government
A coalition government is a cabinet of a parliamentary government in which several political parties cooperate. The usual reason given for this arrangement is that no party on its own can achieve a majority in the parliament...
to Liberal
Liberal Party of Canada
The Liberal Party of Canada , colloquially known as the Grits, is the oldest federally registered party in Canada. In the conventional political spectrum, the party sits between the centre and the centre-left. Historically the Liberal Party has positioned itself to the left of the Conservative...
leader Sir Wilfrid Laurier
Wilfrid Laurier
Sir Wilfrid Laurier, GCMG, PC, KC, baptized Henri-Charles-Wilfrid Laurier was the seventh Prime Minister of Canada from 11 July 1896 to 6 October 1911....
in order to enact conscription
Conscription
Conscription is the compulsory enlistment of people in some sort of national service, most often military service. Conscription dates back to antiquity and continues in some countries to the present day under various names...
, and to govern for the remainder of the war. Laurier rejected this proposal because of the opposition of his Quebec
Quebec
Quebec or is a province in east-central Canada. It is the only Canadian province with a predominantly French-speaking population and the only one whose sole official language is French at the provincial level....
MPs, and fears that Quebec nationalist leader Henri Bourassa
Henri Bourassa
Joseph-Napoléon-Henri Bourassa was a French Canadian political leader and publisher. He is seen by many as an ideological father of Canadian nationalism....
would be able to exploit the situation.

As an alternative to a coalition with Laurier, on October 12, 1917, Borden formed the Union government with a Cabinet of twelve Conservatives, nine Liberals and Independents and one "Labour" MP. To represent "labour" and the working class
Working class
Working class is a term used in the social sciences and in ordinary conversation to describe those employed in lower tier jobs , often extending to those in unemployment or otherwise possessing below-average incomes...
, Borden appointed to the Cabinet Conservative Senator
Canadian Senate
The Senate of Canada is a component of the Parliament of Canada, along with the House of Commons, and the monarch . The Senate consists of 105 members appointed by the governor general on the advice of the prime minister...
Gideon Decker Robertson who had been appointed to the Senate in January and had links with the conservative wing of the labour movement
Labour movement
The term labour movement or labor movement is a broad term for the development of a collective organization of working people, to campaign in their own interest for better treatment from their employers and governments, in particular through the implementation of specific laws governing labour...
through his profession as a telegrapher. Robertson, however, was a Tory and not a member of any Labour or socialist party.

Supporters of the Borden government ran for parliament
Canadian House of Commons
The House of Commons of Canada is a component of the Parliament of Canada, along with the Sovereign and the Senate. The House of Commons is a democratically elected body, consisting of 308 members known as Members of Parliament...
as "Unionists", while some of the Liberals running as government supporters preferred to call themselves "Liberal-Unionist
Liberal-Unionist
For the British party see Liberal Unionist PartyLiberal-Unionists were supporters of the Liberal Party of Canada who, as a result of the Conscription Crisis of 1917 rejected Sir Wilfrid Laurier's leadership and supported the coalition Unionist government of Sir Robert Borden.Much of the Ontario...
".

In the 1921 general election
Canadian federal election, 1921
The Canadian federal election of 1921 was held on December 6, 1921 to elect members of the Canadian House of Commons of the 14th Parliament of Canada. The Union government that had governed Canada through the First World War was defeated, and replaced by a Liberal government under the young leader...
, most of the Liberal-Unionist MPs did not join this party, and ran as Liberals under the leadership of its new leader, William Lyon Mackenzie King
William Lyon Mackenzie King
William Lyon Mackenzie King, PC, OM, CMG was the dominant Canadian political leader from the 1920s through the 1940s. He served as the tenth Prime Minister of Canada from December 29, 1921 to June 28, 1926; from September 25, 1926 to August 7, 1930; and from October 23, 1935 to November 15, 1948...
. Only a handful ran again as Liberal-Unionists or joined Meighen's renamed party. Prominent Liberal Unionists who stayed with the Conservatives include Hugh Guthrie
Hugh Guthrie
Hugh Guthrie, PC, KC was a Canadian politician and Cabinet minister in the governments of Sir Robert Borden, Arthur Meighen and R. B. Bennett....
and Robert Manion.

During World War II
World War II
World War II, or the Second World War , was a global conflict lasting from 1939 to 1945, involving most of the world's nations—including all of the great powers—eventually forming two opposing military alliances: the Allies and the Axis...
, the Conservatives attempted to oppose the Liberal government of William Lyon Mackenzie King
William Lyon Mackenzie King
William Lyon Mackenzie King, PC, OM, CMG was the dominant Canadian political leader from the 1920s through the 1940s. He served as the tenth Prime Minister of Canada from December 29, 1921 to June 28, 1926; from September 25, 1926 to August 7, 1930; and from October 23, 1935 to November 15, 1948...
in the 1940 election
Canadian federal election, 1940
The Canadian federal election of 1940 was the 19th general election in Canadian history. It was held March 26, 1940 to elect members of the Canadian House of Commons of the 19th Parliament of Canada...
by proposing a "national government" along the lines of the previous war's Unionist government. Accordingly, they ran in the election under the name National Government party but did not repeat the success of the Unionist party and failed to make a dent in King's governing majority.