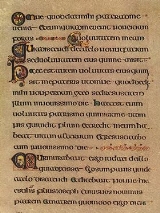 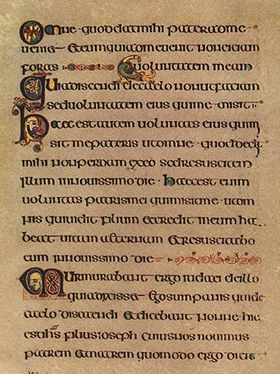 Early uncial script is likely to have developed from late Old Roman cursive. Early forms are characterized by broad single stroke letter
Letter (alphabet)
A letter is a grapheme in an alphabetic system of writing, such as the Greek alphabet and its descendants. Letters compose phonemes and each phoneme represents a phone in the spoken form of the language....
s using simple round forms taking advantage of the new parchment
Parchment
Parchment is a thin material made from calfskin, sheepskin or goatskin, often split. Its most common use was as a material for writing on, for documents, notes, or the pages of a book, codex or manuscript. It is distinct from leather in that parchment is limed but not tanned; therefore, it is very...
and vellum surfaces, as opposed to the angular, multiple stroke letters, which are more suited for rougher surfaces, such as papyrus
Papyrus
Papyrus is a thick paper-like material produced from the pith of the papyrus plant, Cyperus papyrus, a wetland sedge that was once abundant in the Nile Delta of Egypt....
. In the oldest examples of uncial, such as the De bellis macedonicis manuscript
Manuscript
A manuscript or handwrite is written information that has been manually created by someone or some people, such as a hand-written letter, as opposed to being printed or reproduced some other way...
in the British Library
British Library
The British Library is the national library of the United Kingdom, and is the world's largest library in terms of total number of items. The library is a major research library, holding over 150 million items from every country in the world, in virtually all known languages and in many formats,...
, all of the letters are disconnected from one another, and word separation is typically not used. Word separation, however, is characteristic of later uncial usage.

As the script evolved over the centuries, the characters became more complex. Specifically, around AD 600, flourishes and exaggerations of the basic strokes began to appear in more manuscripts. Ascenders and descender
Descender
In typography, a descender is the portion of a letter that extends below the baseline of a font. The line that descenders reach down to is known as the beard line....
s were the first major alterations, followed by twists of the tool in the basic stroke and overlapping. By the time the more compact minuscule scripts arose circa AD 800, some of the evolved uncial styles formed the basis for these simplified, smaller scripts. Uncial was still used, particularly for copies of the Bible
Bible
The Bible refers to any one of the collections of the primary religious texts of Judaism and Christianity. There is no common version of the Bible, as the individual books , their contents and their order vary among denominations...
, tapering off until around the 10th century. There are over 500 surviving copies of uncial script, by far the largest number prior to the Carolingian Renaissance
Carolingian Renaissance
In the history of ideas the Carolingian Renaissance stands out as a period of intellectual and cultural revival in Europe occurring from the late eighth century, in the generation of Alcuin, to the 9th century, and the generation of Heiric of Auxerre, with the peak of the activities coordinated...
. 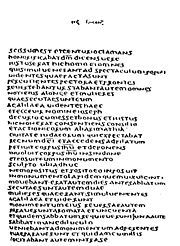 In general, there are some common features of uncial script:


In later uncial scripts, the letters are sometimes drawn haphazardly; for example, double-l runs together at the baseline, bows (for example in b, p, r) do not entirely curve in to touch their stems, and the script is generally not written as cleanly as previously.

Due to its extremely widespread use, in Byzantine
Byzantine Empire
The Byzantine Empire was the Eastern Roman Empire during the periods of Late Antiquity and the Middle Ages, centred on the capital of Constantinople. Known simply as the Roman Empire or Romania to its inhabitants and neighbours, the Empire was the direct continuation of the Ancient Roman State...
, Africa
Africa
Africa is the world's second largest and second most populous continent, after Asia. At about 30.2 million km² including adjacent islands, it covers 6% of the Earth's total surface area and 20.4% of the total land area...
n, Italian
Italy
Italy , officially the Italian Republic languages]] under the European Charter for Regional or Minority Languages. In each of these, Italy's official name is as follows:;;;;;;;;), is a unitary parliamentary republic in South-Central Europe. To the north it borders France, Switzerland, Austria and...
, French
France
The French Republic , The French Republic , The French Republic , (commonly known as France , is a unitary semi-presidential republic in Western Europe with several overseas territories and islands located on other continents and in the Indian, Pacific, and Atlantic oceans. Metropolitan France...
, Spanish
Spain
Spain , officially the Kingdom of Spain languages]] under the European Charter for Regional or Minority Languages. In each of these, Spain's official name is as follows:;;;;;;), is a country and member state of the European Union located in southwestern Europe on the Iberian Peninsula...
, and "insular" (Irish
Ireland
Ireland is an island to the northwest of continental Europe. It is the third-largest island in Europe and the twentieth-largest island on Earth...
and English
England
England is a country that is part of the United Kingdom. It shares land borders with Scotland to the north and Wales to the west; the Irish Sea is to the north west, the Celtic Sea to the south west, with the North Sea to the east and the English Channel to the south separating it from continental...
) centres, there were many slightly different styles in use:

Origin of the word

There is some doubt about the original meaning of the word. Uncial itself probably comes from St. Jerome's preface to the Book of Job
Book of Job
The Book of Job , commonly referred to simply as Job, is one of the books of the Hebrew Bible. It relates the story of Job, his trials at the hands of Satan, his discussions with friends on the origins and nature of his suffering, his challenge to God, and finally a response from God. The book is a...
, where it is found in the form uncialibus, but it is possible that this is a misreading of inicialibus (though this makes little sense in the context), and Jerome may have been referring to the larger initial letters found at the beginning of paragraphs.

In classical Latin uncialis could mean both “inch-high” and “weighing an ounce”, and it is possible that Jerome was punning on this; he may conceivably also have been playing with the other meaning of codex, “block of wood”.

The word, uncial, is also sometimes used to refer to manuscripts that have been scribed in uncial, especially when differentiating from those penned with minuscule. Some of the most noteworthy Greek uncials are:

The Petropolitanus is considered by some to contain optimum uncial style. It is also an example of how large the characters were getting.

Modern calligraphy
Calligraphy
Calligraphy is a type of visual art. It is often called the art of fancy lettering . A contemporary definition of calligraphic practice is "the art of giving form to signs in an expressive, harmonious and skillful manner"...
usually teaches a form of evolved Latin-based uncial hand that would probably be best compared to the later 7th to 10th century examples, though admittedly, the variations in Latin uncial are much wider and less rigid than Greek. Modern uncial has borrowed heavily from some of the conventions found in more cursive
Cursive
Cursive, also known as joined-up writing, joint writing, or running writing, is any style of handwriting in which the symbols of the language are written in a simplified and/or flowing manner, generally for the purpose of making writing easier or faster...
scripts, using flourishes, variable width strokes, and on occasion, even center axis tilt.

In a way comparable to the continued widespread use of the blackletter
Blackletter
Blackletter, also known as Gothic script, Gothic minuscule, or Textura, was a script used throughout Western Europe from approximately 1150 to well into the 17th century. It continued to be used for the German language until the 20th century. Fraktur is a notable script of this type, and sometimes...
typeface
Typeface
In typography, a typeface is the artistic representation or interpretation of characters; it is the way the type looks. Each type is designed and there are thousands of different typefaces in existence, with new ones being developed constantly....
s for written German
German language
German is a West Germanic language, related to and classified alongside English and Dutch. With an estimated 90 – 98 million native speakers, German is one of the world's major languages and is the most widely-spoken first language in the European Union....
until well into the 20th century, Gaelic
Gaelic script
Gaelic type, sometimes called Irish character, Irish type, or Gaelic script, is a family of insular typefaces devised for printing Irish and used between the 16th and 20th centuries. Sometimes all Gaelic typefaces are called Celtic or uncial, though most Gaelic types are not uncials...
letterforms, which are similar to uncial letterforms, were conventionally used for typography in Irish
Irish language
Irish , also known as Irish Gaelic, is a Goidelic language of the Indo-European language family, originating in Ireland and historically spoken by the Irish people. Irish is now spoken as a first language by a minority of Irish people, as well as being a second language of a larger proportion of...
until the 1950s. The script is still widely used in this way for titles of documents, inscriptions on monuments and other 'official' uses. Strictly speaking, the Gaelic script is insular
Insular script
Insular script was a medieval script system originally used in Ireland, then Great Britain, that spread to continental Europe under the influence of Celtic Christianity. Irish missionaries also took the script to continental Europe, where they founded monasteries such as Bobbio. The scripts were...
, not uncial.

The term half-uncial or semi-uncial was first deployed by Scipione Maffei, Istoria diplomatica (Mantua, 1727); he used it to distinguish what seemed like a cut-down version of uncial in the famous Codex Basilicanus of Hilary, which contains sections in each of the two types of script. The terminology was continued in the mid-18th century by René Prosper Tassin and Charles François Toustain. Despite the common and well-fixed usage, half-uncial is a poor name to the extent that is suggests some organic debt to regular uncial, though both types share features inherited from their ancient source. See now: L. E. Boyle, “‘Basilicanus’ of Hilary Revisited,” in Integral Palaeography, with an introduction by F. Troncarelli, 105-17. Turnhout, 2001

Like uncial, half-uncial derived from Roman cursive, but now of a later, evolved type. It was first used around the 3rd century and remained in use until the end of the 8th century. The early forms of half-uncial were used for pagan authors and Roman legal writing, while in the 6th century the script came to be used in Africa and Europe (but not as often in insular centres) to transcribe Christian texts.

Some general forms of half-uncial letters are: