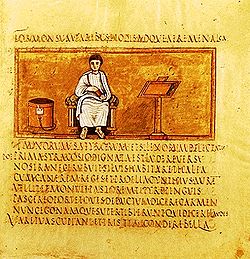 Rustic capitals is an ancient Roman
Ancient Rome
Ancient Rome was a thriving civilization that grew on the Italian Peninsula as early as the 8th century BC. Located along the Mediterranean Sea and centered on the city of Rome, it expanded to one of the largest empires in the ancient world....
calligraphic
Calligraphy
Calligraphy is a type of visual art. It is often called the art of fancy lettering . A contemporary definition of calligraphic practice is "the art of giving form to signs in an expressive, harmonious and skillful manner"...
script. As the term is negatively connotated supposing an opposition to the more 'civilized' form of the Roman square capitals
Roman square capitals
Roman square capitals, also called capitalis monumentalis, inscriptional capitals, elegant capitals and quadrata, are an ancient Roman form of writing, and the basis for modern capital letters....
Bernhard Bischoff prefers to call the script canonized capitals.

Rustic capitals are similar to Roman square capitals
Roman square capitals
Roman square capitals, also called capitalis monumentalis, inscriptional capitals, elegant capitals and quadrata, are an ancient Roman form of writing, and the basis for modern capital letters....
, but are less rigid, influenced more by pen and ink writing on papyrus
Papyrus
Papyrus is a thick paper-like material produced from the pith of the papyrus plant, Cyperus papyrus, a wetland sedge that was once abundant in the Nile Delta of Egypt....
or parchment
Parchment
Parchment is a thin material made from calfskin, sheepskin or goatskin, often split. Its most common use was as a material for writing on, for documents, notes, or the pages of a book, codex or manuscript. It is distinct from leather in that parchment is limed but not tanned; therefore, it is very...
than the writing used for inscriptions. The letters are thinner and more compressed, use many more curved lines than do square capitals, and have descender
Descender
In typography, a descender is the portion of a letter that extends below the baseline of a font. The line that descenders reach down to is known as the beard line....
s extending below the baseline.

The script was used between the 1st century and the 9th century, most often between the 4th and 6th centuries. After the 5th century, rustic capitals began to fall out of use, but they continued to be used as a display script in titles and headings, along with uncial
Uncial
Uncial is a majuscule script commonly used from the 3rd to 8th centuries AD by Latin and Greek scribes. Uncial letters are written in either Greek, Latin, or Gothic.-Development:...
as the script of the main text.

About fifty manuscripts with rustic capitals survive, including four copies of works by Virgil
Virgil
Publius Vergilius Maro, usually called Virgil or Vergil in English , was an ancient Roman poet of the Augustan period. He is known for three major works of Latin literature, the Eclogues , the Georgics, and the epic Aeneid...
(including the Vergilius Vaticanus
Vergilius Vaticanus
The Vergilius Vaticanus is a manuscript containing fragments of Virgil's Aeneid and Georgics made in Rome in about 400. It is one of the oldest surviving sources for the text of the Aeneid and is the oldest and one of only three illustrated manuscript of classical literature...
and the Vergilius Romanus
Vergilius Romanus
The Vergilius Romanus , also known as the Roman Vergil, is a 5th century illuminated manuscript of the works of Virgil. It contains the Aeneid, the Georgics, and some of the Eclogues. It is one of the oldest and most important Vergilian manuscripts. It is 332 by 323 mm with 309 vellum folios...
), one copy of a work by Terence
Terence
Publius Terentius Afer , better known in English as Terence, was a playwright of the Roman Republic, of North African descent. His comedies were performed for the first time around 170–160 BC. Terentius Lucanus, a Roman senator, brought Terence to Rome as a slave, educated him and later on,...
, and one of a work by Prudentius
Prudentius
Aurelius Prudentius Clemens was a Roman Christian poet, born in the Roman province of Tarraconensis in 348. He probably died in Spain, as well, some time after 405, possibly around 413...
. The script was usually used for de luxe copies of pagan authors; the only works by Christian authors which use this script are those by Prudentius and Sedulius
Coelius Sedulius
Coelius Sedulius, was a Christian poet of the first half of the 5th century. He is termed a presbyter by Isidore of Seville and in the Gelasian decree....
.
The source of this article is wikipedia, the free encyclopedia.  The text of this article is licensed under the GFDL.