The contract to build her was awarded to the Electric Boat
Electric boat
While a significant majority of water vessels are powered by diesel engines, with sail power and gasoline engines also remaining popular, boats powered by electricity have been used for over 120 years. Electric boats were very popular from the 1880s until the 1920s, when the internal combustion...
division of General Dynamics
General Dynamics
General Dynamics Corporation is a U.S. defense conglomerate formed by mergers and divestitures, and as of 2008 it is the fifth largest defense contractor in the world. Its headquarters are in West Falls Church , unincorporated Fairfax County, Virginia, in the Falls Church area.The company has...
on 18 July 1955, and her keel was laid in Groton, Connecticut
Groton, Connecticut
Groton is a town located on the Thames River in New London County, Connecticut, United States. The population was 39,907 at the 2000 census....
on 21 July 1955. She was launched
Ship naming and launching
The ceremonies involved in naming and launching naval ships are based in traditions thousands of years old.-Methods of launch:There are three principal methods of conveying a new ship from building site to water, only two of which are called "launching." The oldest, most familiar, and most widely...
on 16 May 1957 sponsored by Mrs. Lewis L. Strauss, and commissioned
Ship commissioning
Ship commissioning is the act or ceremony of placing a ship in active service, and may be regarded as a particular application of the general concepts and practices of project commissioning. The term is most commonly applied to the placing of a warship in active duty with its country's military...
on 23 December 1957 with Commander James F. Calvert
James F. Calvert
James Francis Calvert served in the United States Navy, where he commanded the , the third nuclear submarine commissioned and the second submarine to reach the North Pole, which became the first to surface at the pole when it did so on August 11, 1958...
in command. 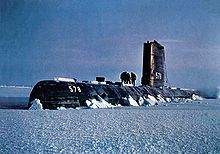 Skate conducted shakedown training out of New London, Connecticut
New London, Connecticut
New London is a seaport city and a port of entry on the northeast coast of the United States.It is located at the mouth of the Thames River in New London County, southeastern Connecticut....
until 29 January 1958, when she cruised to the Bermuda
Bermuda
Bermuda is a British overseas territory in the North Atlantic Ocean. Located off the east coast of the United States, its nearest landmass is Cape Hatteras, North Carolina, about to the west-northwest. It is about south of Halifax, Nova Scotia, Canada, and northeast of Miami, Florida...
operating area, then returned to her home port on 8 February. Sixteen days later, the nuclear powered submarine set a course for the Isle of Portland
Isle of Portland
The Isle of Portland is a limestone tied island, long by wide, in the English Channel. Portland is south of the resort of Weymouth, forming the southernmost point of the county of Dorset, England. A tombolo over which runs the A354 road connects it to Chesil Beach and the mainland. Portland and...
, England. Before returning home, she had also visited ports in France and the Netherlands
Netherlands
The Netherlands is a constituent country of the Kingdom of the Netherlands, located mainly in North-West Europe and with several islands in the Caribbean. Mainland Netherlands borders the North Sea to the north and west, Belgium to the south, and Germany to the east, and shares maritime borders...
.

On 30 July, Skate steamed to the Arctic where she operated under the ice for 10 days. During this time, she surfaced nine times through the ice, navigated over 2400 miles (3,862.4 km) under it, and on August 11th, 9:47pm EDT
(the week after USS Nautilus
USS Nautilus (SSN-571)
USS Nautilus is the world's first operational nuclear-powered submarine. She was the first vessel to complete a submerged transit beneath the North Pole on August 3, 1958...
) became the second sea ship to reach the North Pole, earning the Navy Unit Commendation
Navy Unit Commendation
The Navy Unit Commendation of the United States Navy is an award that was established by order of the Secretary of the Navy James Forrestal on 18 December 1944...
award for "... braving the hazards of the polar ice pack...." On 23 August, she steamed into Bergen, Norway. The submarine made port calls in the Netherlands, Belgium, and France before returning to New London on 25 September 1958.

In the following months, Skate, as the first ship of her class, conducted various tests in the vicinity of her home port. In early March 1959 , she again headed for the Arctic
Arctic
The Arctic is a region located at the northern-most part of the Earth. The Arctic consists of the Arctic Ocean and parts of Canada, Russia, Greenland, the United States, Norway, Sweden, Finland, and Iceland. The Arctic region consists of a vast, ice-covered ocean, surrounded by treeless permafrost...
to pioneer operations during the period of extreme cold and maximum ice thickness. The submarine steamed 3900 miles (6,276.4 km) under pack ice while surfacing through it ten times. On 17 March, she surfaced at the North Pole
North Pole
The North Pole, also known as the Geographic North Pole or Terrestrial North Pole, is, subject to the caveats explained below, defined as the point in the northern hemisphere where the Earth's axis of rotation meets its surface...
to commit the ashes of the famed explorer Sir Hubert Wilkins
Hubert Wilkins
Sir Hubert Wilkins MC & Bar was an Australian polar explorer, ornithologist, pilot, soldier, geographer and photographer.-Early life:...
to the Arctic waste. When the submarine returned to port, she was awarded a bronze star in lieu of a second Navy Unit Commendation
Navy Unit Commendation
The Navy Unit Commendation of the United States Navy is an award that was established by order of the Secretary of the Navy James Forrestal on 18 December 1944...
for demonstrating "... for the first time the ability of submarines to operate in and under the Arctic ice in the dead of winter...." In the fall of 1959 and in 1960, Skate participated in exercises designed to strengthen American antisubmarine defenses.

Skate returned to General Dynamics in January 1961 for a regular overhaul and to have her reactor refueled
Refueling and Overhaul
In the United States Navy, Refueling and Overhaul refers to a lengthy process or procedure performed on nuclear-powered Naval ships, which involves replacement of expended nuclear fuel with new fuel and a general maintenance fix-up, renovation, and often modernization of the entire ship...
for the first time. She put to sea in August and, for the next 11 months, conducted exercises to increase the operational readiness of her crew.

On 7 July 1962, Skate again set course towards the North Pole
North Pole
The North Pole, also known as the Geographic North Pole or Terrestrial North Pole, is, subject to the caveats explained below, defined as the point in the northern hemisphere where the Earth's axis of rotation meets its surface...
. Five days later, , did likewise from Pearl Harbor
Pearl Harbor
Pearl Harbor, known to Hawaiians as Puuloa, is a lagoon harbor on the island of Oahu, Hawaii, west of Honolulu. Much of the harbor and surrounding lands is a United States Navy deep-water naval base. It is also the headquarters of the U.S. Pacific Fleet...
. The two submarines made their rendezvous on 31 July. After meeting, they operated together for over a week. Both submarines surfaced at the North Pole on 2 August and official greetings and insignia of Submarine Force Atlantic Fleet and Submarine Force Pacific Fleet were exchanged.

Skate returned to New London and performed fleet and local operations for the next several years. She entered the Norfolk Naval Shipyard
Norfolk Naval Shipyard
The Norfolk Naval Shipyard, often called the Norfolk Navy Yard and abbreviated as NNSY, is a U.S. Navy facility in Portsmouth, Virginia, for building, remodeling, and repairing the Navy's ships. It's the oldest and largest industrial facility that belongs to the U.S. Navy as well as the most...
on 28 April 1965, the first nuclear submarine overhauled there, for nuclear refueling and installation of the SUBSAFE
SUBSAFE
SUBSAFE is a quality assurance program of the United States Navy designed to maintain the safety of the nuclear submarine fleet; specifically, to provide maximum reasonable assurance that subs' hulls will stay watertight, and that they can recover from unanticipated flooding.SUBSAFE covers all...
package. Skate was the first submarine to finish this major conversion program, which was instituted after the loss of in 1963. The process was not completed until September 1967.

After sea trials and a shakedown cruise in the Caribbean
Caribbean
The Caribbean is a crescent-shaped group of islands more than 2,000 miles long separating the Gulf of Mexico and the Caribbean Sea, to the west and south, from the Atlantic Ocean, to the east and north...
, the submarine returned to New London and participated in exercises involved in the development of new undersea tactics and equipment.

In October 1968, Skate was deployed to the Mediterranean where she operated with the Sixth Fleet for two months. The polar veteran operated under the Arctic ice again in March and April 1969 , in October 1970 , and in February 1971 . The remainder of her at sea time was spent in various Atlantic Fleet and NATO exercises. In July 1971 , she began her third regular overhaul at the Norfolk Naval Shipyard and did not return to New London until 17 November 1973. In August 1974, Skate operated as a unit of the Atlantic Fleet.