A trimethylsilyl group (abbreviated TMS) is a functional group
Functional group
In organic chemistry, functional groups are specific groups of atoms within molecules that are responsible for the characteristic chemical reactions of those molecules. The same functional group will undergo the same or similar chemical reaction regardless of the size of the molecule it is a part of...
in organic chemistry
Organic chemistry
Organic chemistry is a subdiscipline within chemistry involving the scientific study of the structure, properties, composition, reactions, and preparation of carbon-based compounds, hydrocarbons, and their derivatives...
. This group consists of three methyl groups bonded to a silicon
Silicon
Silicon is a chemical element with the symbol Si and atomic number 14. A tetravalent metalloid, it is less reactive than its chemical analog carbon, the nonmetal directly above it in the periodic table, but more reactive than germanium, the metalloid directly below it in the table...
atom [−Si(CH3)3], which is in turn bonded to the rest of a molecule. This structural group is characterized by chemical inertness and a large molecular volume which makes them useful in a number of applications.

Compounds with trimethylsilyl groups are not normally found in nature. Chemists sometimes use a trimethylsilylating reagent
Reagent
A reagent is a "substance or compound that is added to a system in order to bring about a chemical reaction, or added to see if a reaction occurs." Although the terms reactant and reagent are often used interchangeably, a reactant is less specifically a "substance that is consumed in the course of...
to derivatize rather non-volatile compounds such as certain alcohol
Alcohol
In chemistry, an alcohol is an organic compound in which the hydroxy functional group is bound to a carbon atom. In particular, this carbon center should be saturated, having single bonds to three other atoms....
s, phenols
Phenols
In organic chemistry, phenols, sometimes called phenolics, are a class of chemical compounds consisting of a hydroxyl group bonded directly to an aromatic hydrocarbon group...
, or carboxylic acid
Carboxylic acid
Carboxylic acids are organic acids characterized by the presence of at least one carboxyl group. The general formula of a carboxylic acid is R-COOH, where R is some monovalent functional group...
s by substituting a trimethylsilyl group for a hydrogen in the hydroxyl groups on the compounds. This way trimethylsiloxy
Silyl ether
Silyl ethers are a group of chemical compounds which contain a silicon atom covalently bonded to an alkoxy group. The general structure is R1R2R3Si−O−R4 where R4 is an alkyl group or an aryl group. Silyl ethers are usually used as protecting groups for alcohols in organic synthesis...
groups [−O-Si(CH3)3] are formed on the molecule. A couple of examples of trimethylsilylating agents include trimethylsilyl chloride
Trimethylsilyl chloride
Trimethylsilyl chloride, also known as chlorotrimethylsilane is a silyl halide, with a variety of different uses in chemistry. It has the formula 3SiCl, and under standard conditions it is a colourless liquid, which is stable in the absence of water...
and bis(trimethylsilyl)acetamide
Bis(trimethylsilyl)acetamide
*:Bisacetamide → ? —— Current title is ambiguous.Bisacetamide is used in analytical chemistry for the derivatisation of compounds in analysis to increase their volatility....
. Trimethylsilyl groups on a molecule have a tendency to make it more volatile, often making the compounds more amenable to analysis by gas chromatography or mass spectrometry
Mass spectrometry
Mass spectrometry is an analytical technique that measures the mass-to-charge ratio of charged particles.It is used for determining masses of particles, for determining the elemental composition of a sample or molecule, and for elucidating the chemical structures of molecules, such as peptides and...
. An example of such trimethylsilylation is mentioned in the Brassicasterol
Brassicasterol
Brassicasterol is a 28-carbon sterol synthesised by several unicellular algae and some terrestrial plants, e.g., oilseed rape...
article. Such derivatizations are often done on a small scale in special vial
Vial
A vial is a relatively small glass vessel or bottle, especially used to store medication as liquids, powders or in other forms like capsules. They can also be sample vessels; e.g., for use in autosampler devices in analytical chromatography.The glass can be colourless or coloured, clear or amber...
s.

In chromatography
Chromatography
Chromatography is the collective term for a set of laboratory techniques for the separation of mixtures....
, derivitization of accessible silanol
Silanol
Silanol, also known as silyl alcohol, is a chemical with formula SiH3OH. It is the simplest silicon alcohol, and is a heavy, volatile, colorless, flammable liquid. At room temperature it is a polar liquid...
groups in a bonded stationary phase with trimethylsilyl groups is referred to as endcapping
Endcapping
Endcapping refers in chromatography to the replacement of accessible silanol groups in a bonded stationary phase by trimethylsilyl groups.Endcapping technology prevents the tailing of a polar compound's peak and shows very high durability even with an alkaline mobile phase because of the strong...
.

In an NMR spectrum
NMR spectroscopy
Nuclear magnetic resonance spectroscopy, most commonly known as NMR spectroscopy, is a research technique that exploits the magnetic properties of certain atomic nuclei to determine physical and chemical properties of atoms or the molecules in which they are contained...
, signals from atoms in trimethylsilyl groups in compounds will commonly have chemical shifts close to the tetramethylsilane reference peak at 0 ppm. Also compounds, such as high temperature silicone "stopcock
Stopcock
A stopcock is a valve used to restrict or isolate the flow of a liquid or gas through a pipe.In Great Britain a stopcock, not to be confused with a gate valve or a DiCiaccio branch, is used to prevent flow of water into a domestic water system. There are usually two stopcocks for a home...
" grease
Grease (lubricant)
The term grease is used to describe semisolid lubricants. Although the word grease is also used to describe rendered fat of animals, in the context of lubrication, grease typically applies to a material consisting of a soap emulsified with mineral or vegetable oil...
, which have polysiloxanes (often called silicones) in them will commonly show peaks from their methyl groups (attached to the silicon atoms) having NMR chemical shifts close to the tetramethylsilane standard peak, such as at 0.07 ppm in CDCl3. 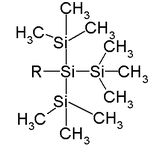 Related to trimethylsiliyl groups are so-called super silyl groups of which there exist two varieties: A silicon group connected to three trimethylsilyl groups makes a tri(trimethylsilyl)silyl group (TTMSS or TMS3Si) and a silicon group connected to three tert-butyl groups. The TTMSS group was proposed in 1993 by Hans Bock
Hans Bock (chemist)
Hans Bock was a German chemist born in Hamburg and died in Königstein im Taunus.- Career :Hans Bock studied chemistry at the University of Munich, where he received his PhD in 1958 for his work on water-free hydrazine in the group of Egon Wiberg...
. With a van der Waals volume of up to 7 cubic angstrom
Ångström
The angstrom or ångström, is a unit of length equal to 1/10,000,000,000 of a meter . Its symbol is the Swedish letter Å....
it surpasses the related TIPS group (around 2) and one potential application is its use as a temporary substituent promoting asymmetric induction
Asymmetric induction
Asymmetric induction in stereochemistry describes the preferential formation in a chemical reaction of one enantiomer or diastereoisomer over the other as a result of the influence of a chiral feature present in the substrate, reagent, catalyst or environment...
for example in this diastereoselective one-pot reaction involving two sequential Mukaiyama aldol reactions : 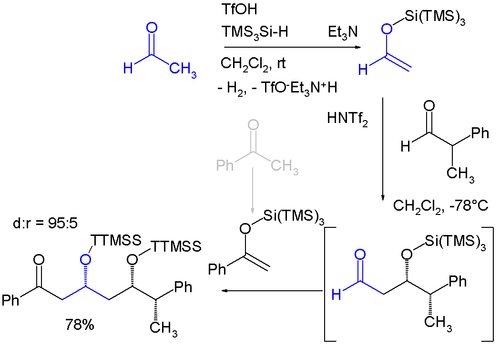