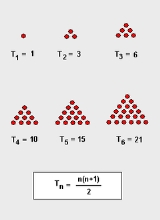 Encyclopedia
A triangular number or triangle number numbers the objects that can form an equilateral triangle, as in the diagram on the right. The nth triangle number is the number of dots in a triangle with n dots on a side; it is the sum of the n natural number
Natural number
In mathematics, the natural numbers are the ordinary whole numbers used for counting and ordering . These purposes are related to the linguistic notions of cardinal and ordinal numbers, respectively...
s from 1 to n. The sequence of triangular numbers is:

The triangle numbers are given by the following explicit formulas:

Triangle numbers are the additive analog of the factorial
Factorial
In mathematics, the factorial of a non-negative integer n, denoted by n!, is the product of all positive integers less than or equal to n...
s, which are the products of integers from 1 to n.

The number of lines you can draw between each of the dots can be represented with the following recurrence relation:

The ratio between the two numbers, dots and lines also has the interesting property of:

Relations to other figurate numbers

Most simply, the sum of two consecutive triangular numbers is a square number
Square number
In mathematics, a square number, sometimes also called a perfect square, is an integer that is the square of an integer; in other words, it is the product of some integer with itself...
, with the sum being the square of the difference between the two. Algebraically,

Alternatively, the same fact can be demonstrated graphically:

There are infinitely many triangular numbers that are also square numbers; e.g., 1, 36. Some of them can be generated by a simple recursive formula:

Also, the square of the nth triangular number is the same as the sum of the cubes of the integers 1 to n.

where T is a triangular number.

The positive difference of two triangular numbers is a trapezoidal number.

Triangular numbers correspond to the 1st-order case of Faulhaber's formula.

The inverse of the statement above is, however, not always true. For example, the digital root of 12, which is not a triangular number, is 3 and divisible by three.

This can be shown by using the basic sum of a telescoping series:

Two other interesting formulas regarding triangular numbers are:

both of which can easily be established either by looking at dot patterns (see above) or with some simple algebra.

In 1796, German mathematician and scientist Carl Friedrich Gauss
Carl Friedrich Gauss
Johann Carl Friedrich Gauss was a German mathematician and scientist who contributed significantly to many fields, including number theory, statistics, analysis, differential geometry, geodesy, geophysics, electrostatics, astronomy and optics.Sometimes referred to as the Princeps mathematicorum...
discovered that every positive integer is representable as a sum of at most three triangular numbers, writing in his diary his famous words, "EΥΡHKA!
Eureka (word)
"Eureka" is an interjection used to celebrate a discovery, a transliteration of a word attributed to Archimedes.-Etymology:The word comes from ancient Greek εὕρηκα heúrēka "I have found ", which is the 1st person singular perfect indicative active of the verb heuriskō "I find"...
num = Δ + Δ + Δ" Note that this theorem does not imply that the triangular numbers are different (as in the case of 20=10+10), nor that a solution with three nonzero triangular numbers must exist. This is a special case of Fermat's Polygonal Number Theorem
Fermat polygonal number theorem
In additive number theory, the Fermat polygonal number theorem states that every positive integer is a sum of at most -gonal numbers. That is, every positive number can be written as the sum of three or fewer triangular numbers, and as the sum of four or fewer square numbers, and as the sum of...
.

The largest triangular number of the form 2k-1 is 4095, see Ramanujan–Nagell equation.

By analogy with the square root
Square root
In mathematics, a square root of a number x is a number r such that r2 = x, or, in other words, a number r whose square is x...
of , one can define the (positive) triangular root of as the number n such that :

An integer is triangular if and only if is a square. Equivalently, if the positive triangular root of is an integer, then is the th triangular number.