The share of transport in the economy of Ukraine

The share of the transport sector in Ukraine's gross domestic product (according to Goskomstat) as of 2009 was 11.3%. The number of workers employed in the sector is almost 7% of total employment. The transportation infrastructure of Ukraine is adequately developed overall, however it is obsolete and in need of major modernization. A remarkable boost in the recent development of the country's transportation infrastructure was noticed after winning the right to host a major continental sport event the UEFA Euro 2012.

The advantageous geographical position of Ukraine allows for the location of a number of International Transport Corridors on its territory, in particular :

In 2009, Ukrainian infrastructure provided for the transportation of 1.5 billion tons of cargo and 7.3 billion passengers. As the global financial crisis took hold and demand for major export commodities in 2009 fell, the volume of freight traffic decreased by 17,6% when compared with figures from 2008; passenger transport fell by 12,7%.

Today the transport sector in Ukraine generally meets only the basic needs of the economy and population. The level of safety, quality and efficiency of passenger and freight transport, as well as the infrastructure's amount of energy usage, and the technological burden it places on the environment do not meet modern-day requirements.

Due to the low level of demand, the country's existing transit potential and advantageous geographical position is not fully utilised. There is thus a lag in the development of transport infrastructure, transport and logistics technologies and multimodal transport. All this has made Ukraine uncompetitive as the high costs of transport across the country make the cost of production in the country uncommonly high.

The railways are managed by a state railway company Ukrzaliznytsia
Ukrzaliznytsia
Ukrzaliznytsia , also known as Ukrainian Railways, is the State Administration of Railroad Transportation in Ukraine, monopoly that controls vast majority of the railroad transportation in the country with a combined total length of track of over 23,000 km, which makes Ukrainian railroad...
which also is a state agency. Note that industrial railways and metro
Rapid transit
A rapid transit, underground, subway, elevated railway, metro or metropolitan railway system is an electric passenger railway in an urban area with a high capacity and frequency, and grade separation from other traffic. Rapid transit systems are typically located either in underground tunnels or on...
s in cities are managed locally on a regional level.

The length of the railway network Ukraine ranks third in Europe (21.7 thousand kilometres of railways).

Ukrainian trains are usually capable of speeds up to 160 kilometers per hour, as the number of railway passengers and freight climbs, the country expects to see a significant improvement in the quality of railway transport. In addition to this the government expects to make huge investments in the railways in preparation for Euro 2012. However, there is currently not enough line capacity provided on routes to the south and the Crimea
Crimea
Crimea , or the Autonomous Republic of Crimea , is a sub-national unit, an autonomous republic, of Ukraine. It is located on the northern coast of the Black Sea, occupying a peninsula of the same name...
.

Network length: (2010) broad gauge
Russian gauge
In railway terminology, Russian gauge refers to railway track with a gauge between 1,520 mm and . In a narrow sense as defined by Russian Railways it refers to gauge....
of , ~10000 km (6,214 mi) electrified (3 kV DC and 25 kV AC) of standard gauge
Standard gauge
The standard gauge is a widely-used track gauge . Approximately 60% of the world's existing railway lines are built to this gauge...
, electrified

There is also a network of suburban and regional train routes for type of local transportation connecting smaller settlements with big cities.

This is due to a number of objective reasons, including that the burden of maintaining the transport network per capita is significantly higher than in European countries because of Ukraine's relatively low population density (76 people per square kilometre), low purchasing power of citizens (1/5 of the Eurozone's purchasing capacity), relatively low car ownership and a the nation's large territory.

The operational condition of roads is very poor; around 51.1% of roads do not meet minimum standards, and 39.2% require major rebuilds. The average speed on roads in Ukraine 2 - 3 times lower than in Western countries.

Kiev
Kiev
Kiev or Kyiv is the capital and the largest city of Ukraine, located in the north central part of the country on the Dnieper River. The population as of the 2001 census was 2,611,300. However, higher numbers have been cited in the press....
- Boryspil
Boryspil
Boryspil is a city located in the Kiev Oblast in northern Ukraine. Serving as the administrative center of the Boryspil Raion , the city itself is also designated as a separate raion within the oblast....
| Kharkiv
Kharkiv
Kharkiv or Kharkov is the second-largest city in Ukraine.The city was founded in 1654 and was a major centre of Ukrainian culture in the Russian Empire. Kharkiv became the first city in Ukraine where the Ukrainian Soviet Socialist Republic was proclaimed in December 1917 and Soviet government was...
- Dnipropetrovsk
Dnipropetrovsk
Dnipropetrovsk or Dnepropetrovsk formerly Yekaterinoslav is Ukraine's third largest city with one million inhabitants. It is located southeast of Ukraine's capital Kiev on the Dnieper River, in the south-central region of the country...

State Highways
State Highways (Ukraine)
State Highways in Ukraine are subdivided into three categories: International , National , and Regional . The letter's indexes are of the Cyrillic alphabet standing for they respective abbreviation in the Ukrainian language....
, 8080 kilometre (2009):

Note: State highways are important national routes and are not necessarily high-speed roads 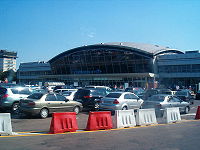 The aviation section in Ukraine is developing very quickly, having recently established a visa-free program for EU nationals and citizens of a number of other 'Western' nations, the nation's aviation sector is handling a significantly increased number of travellers. Additionally, the granting of the Euro 2012 football tournament to Poland and Ukraine as joint hosts has prompted the government to invest huge amounts of money into transport infrastructure, and in particular airports.

Currently there are three major new airport terminals under construction in Donetsk
Donetsk
Donetsk , is a large city in eastern Ukraine on the Kalmius river. Administratively, it is a center of Donetsk Oblast, while historically, it is the unofficial capital and largest city of the economic and cultural Donets Basin region...
, Lviv
Lviv
Lviv is a city in western Ukraine. The city is regarded as one of the main cultural centres of today's Ukraine and historically has also been a major Polish and Jewish cultural center, as Poles and Jews were the two main ethnicities of the city until the outbreak of World War II and the following...
and Kiev
Kiev
Kiev or Kyiv is the capital and the largest city of Ukraine, located in the north central part of the country on the Dnieper River. The population as of the 2001 census was 2,611,300. However, higher numbers have been cited in the press....
, a new airport has already opened in Kharkiv
Kharkiv
Kharkiv or Kharkov is the second-largest city in Ukraine.The city was founded in 1654 and was a major centre of Ukrainian culture in the Russian Empire. Kharkiv became the first city in Ukraine where the Ukrainian Soviet Socialist Republic was proclaimed in December 1917 and Soviet government was...
and Kiev's Boryspil International Airport has recently begun operations at Terminal F, the first of its two new international terminals. Ukraine has a number of airlines, the largest of which are the nation's flag carrier
Flag carrier
A flag carrier is a transportation company, such as an airline or shipping company, that, being locally registered in a given country, enjoys preferential rights or privileges, accorded by the government, for international operations. It may be a state-run, state-owned or private but...
s, Aerosvit and UIA
Ukraine International Airlines
CJSC Ukraine International Airlines , Aviyakompaniya Mizhnarodni Avialiniyi Ukrayiny) is one of the flag carriers of Ukraine, based in Kiev. It operates scheduled domestic and international passenger and cargo services to cities in western Europe...
. Antonov Airlines
Antonov Airlines
Antonov Airlines is a Ukrainian cargo airline. It operates international charter services in the world oversized cargo market. Its main base is Gostomel Airport near Kiev...
, a subsidiary of the Antonov Aerospace Design Bureau
Antonov
Antonov, or Antonov Aeronautical Scientist/Technical Complex , formerly the Antonov Design Bureau, is a Ukrainian aircraft manufacturing and services company with particular expertise in the field of very large aircraft construction. Antonov ASTC is a state-owned commercial company...
is the only operator of the world's largest fixed wing aircraft, the An-225. 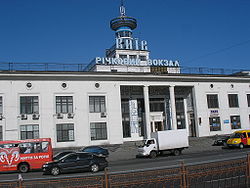 4400 km (2,734 mi) navigable waterways on 7 rivers, most of them are on Danube
Danube
The Danube is a river in the Central Europe and the Europe's second longest river after the Volga. It is classified as an international waterway....
, Dnieper and Pripyat
Pripyat River
The Pripyat River or Prypiat River is a river in Eastern Europe, approximately long. It flows east through Ukraine, Belarus, and Ukraine again, draining into the Dnieper....
rivers. All Ukraine's rivers freeze over in winter (usually December through March), interrupting navigation. The river transportation is supervised by the Ukrrichflot (http://www.ukrrichflot.com/) which combines four major and one minor river ports along the Dnieper river and its estuaries.

Located on the Danube
Danube
The Danube is a river in the Central Europe and the Europe's second longest river after the Volga. It is classified as an international waterway....
river these ports however are considered seaports as well and are serviced by the Ukrainian Danube Ship State Company. Each port is also a separate legal entity and are governed by the Ukrmorrichflot, the Ukrainian administration for any water transportation.

Dnieper within Ukraine is a regulated system of reservoirs separated by dam
Dam
A dam is a barrier that impounds water or underground streams. Dams generally serve the primary purpose of retaining water, while other structures such as floodgates or levees are used to manage or prevent water flow into specific land regions. Hydropower and pumped-storage hydroelectricity are...
s with shiplocks. The river is navigable through all its Ukrainian length.

Notable riverport Chernobyl
Chernobyl
Chernobyl or Chornobyl is an abandoned city in northern Ukraine, in Kiev Oblast, near the border with Belarus. The city had been the administrative centre of the Chernobyl Raion since 1932....
is now abandoned due to the Chernobyl disaster
Chernobyl disaster
The Chernobyl disaster was a nuclear accident that occurred on 26 April 1986 at the Chernobyl Nuclear Power Plant in Ukraine , which was under the direct jurisdiction of the central authorities in Moscow...
, but the waterway retains its importance as part of Dnieper–Baltic Sea
Baltic Sea
The Baltic Sea is a brackish mediterranean sea located in Northern Europe, from 53°N to 66°N latitude and from 20°E to 26°E longitude. It is bounded by the Scandinavian Peninsula, the mainland of Europe, and the Danish islands. It drains into the Kattegat by way of the Øresund, the Great Belt and...
route.