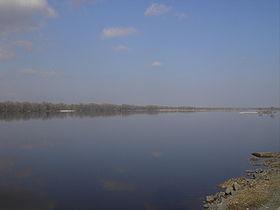 Kremenchuk is an important industrial city
City
A city is a relatively large and permanent settlement. Although there is no agreement on how a city is distinguished from a town within general English language meanings, many cities have a particular administrative, legal, or historical status based on local law.For example, in the U.S...
in the Poltava Oblast
Poltava Oblast
Poltava Oblast is an oblast of central Ukraine. The administrative center of the oblast is the city of Poltava.Other important cities within the oblast include: Komsomolsk, Kremenchuk, Lubny and Myrhorod.-Geography:...
(province
Oblast
Oblast is a type of administrative division in Slavic countries, including some countries of the former Soviet Union. The word "oblast" is a loanword in English, but it is nevertheless often translated as "area", "zone", "province", or "region"...
) of central Ukraine
Ukraine
Ukraine is a country in Eastern Europe. It has an area of 603,628 km², making it the second largest contiguous country on the European continent, after Russia...
. Serving as the administrative center
Capital City
Capital City was a television show produced by Euston Films which focused on the lives of investment bankers in London living and working on the corporate trading floor for the fictional international bank Shane-Longman....
of the Kremenchutskyi Raion
Kremenchutskyi Raion
Kremenchutskyi Raion is a raion in the central Ukrainian province of Poltava. The raion's administrative center is the city of Kremenchuk....
(district
Raion
A raion is a type of administrative unit of several post-Soviet countries. The term, which is from French rayon 'honeycomb, department,' describes both a type of a subnational entity and a division of a city, and is commonly translated in English as "district"...
), the city itself is also designated as a separate raion within the oblast, and is located on the banks of Dnieper River. 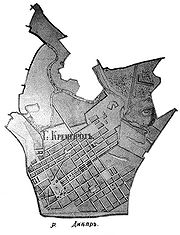 Kremenchuk was supposedly founded in 1571. The name Kremenchuk consists of two words "kremen" - chert
Chert
Chert is a fine-grained silica-rich microcrystalline, cryptocrystalline or microfibrous sedimentary rock that may contain small fossils. It varies greatly in color , but most often manifests as gray, brown, grayish brown and light green to rusty red; its color is an expression of trace elements...
(a mineral) because the city is located on a giant chert plate, and "chuk" - from the Ukrainian "chuyu" ("I hear") - a shout of medieval helmsmen in acknowledgement of a warning cry of "Kremen!" sounded whenever their vessels approached the chert rapids while navigating down the Dnieper. An alternative explanation says that "Kremenchuk" is the Turkish for "small fortress". From its situation at the southern terminus of the navigable course of the Dnieper, and equally advantageous positioning on the crossway from Muscovy to the Black Sea
Black Sea
The Black Sea is bounded by Europe, Anatolia and the Caucasus and is ultimately connected to the Atlantic Ocean via the Mediterranean and the Aegean seas and various straits. The Bosphorus strait connects it to the Sea of Marmara, and the strait of the Dardanelles connects that sea to the Aegean...
, it acquired a great commercial importance early on, and by 1655, it was a wealthy Cossack
Cossack
Cossacks are a group of predominantly East Slavic people who originally were members of democratic, semi-military communities in what is today Ukraine and Southern Russia inhabiting sparsely populated areas and islands in the lower Dnieper and Don basins and who played an important role in the...
town. In 1625, at Lake Kurukove
Lake Kurukove
Kurukove was a freshwater lake located in the central Ukrainian oblast of Poltava.In 1625, the Treaty of Kurukove was signed at the site between the Ukrainian Cossacks and the Poles....
in Kremenchuk, the Treaty of Kurukove
Treaty of Kurukove
The Treaty of Kurukove was an agreement between Hetman Stanisław Koniecpolski of the Polish-Lithuanian Commonwealth and Mykhailo Doroshenko of the Ukrainian Cossacks. After four days of negotiations, it was signed on 5 November 1625 near Lake Kurukove and what is now Kremenchuk. The treaty was a...
was signed between the Cossacks and the Poles
Poland
Poland , officially the Republic of Poland , is a country in Central Europe bordered by Germany to the west; the Czech Republic and Slovakia to the south; Ukraine, Belarus and Lithuania to the east; and the Baltic Sea and Kaliningrad Oblast, a Russian exclave, to the north...
.

Kremenchuk is a large industrial city of Poltava region and one of the leading industrial centers of Ukraine. It contributes about 7% (2005) of the national economy and accounts for more than 50% of the industrial output of Poltava region. The city is the home to KrAZ
KrAZ
KrAZ is a factory that produces trucks and other special-purpose vehicles in Kremenchuk, Ukraine; particularly heavy-duty off-road models...
truck-manufacturing company (one of the largest in Eastern Europe
Eastern Europe
Eastern Europe is the eastern part of Europe. The term has widely disparate geopolitical, geographical, cultural and socioeconomic readings, which makes it highly context-dependent and even volatile, and there are "almost as many definitions of Eastern Europe as there are scholars of the region"...
) as well as a major European oil refinery operated by Ukrtatnafta
Ukrtatnafta
Ukrtatnafta is a Ukrainian oil refining company one of the largest producer of oil products in the country. The company operates the largest oil refinery in the country located in Kremenchuk with a capacity of and several petrol stations...
, the road-making machine works, Kremenchuk Automobile Assembly Plant, the railcar plant, the wheel plant, the carbon black
Carbon black
Carbon black is a material produced by the incomplete combustion of heavy petroleum products such as FCC tar, coal tar, ethylene cracking tar, and a small amount from vegetable oil. Carbon black is a form of amorphous carbon that has a high surface-area-to-volume ratio, although its...
plant, the steel works and others.

The light industries of the city include tobacco (JTI), confectionery (Roshen
Roshen
Roshen is a Ukrainian confectionery- manufacturing group, controlled by politician Petro Poroshenko. It united confectionery factories in Ukrainian cities of Kiev, Vinnytsia, Mariupol and Kremenchuk, as well as in Klaipėda and Lipetsk...
), knitting factory as well as the milk and meat processing plants.

Kremenchuk is one of the most important railway junctions of Central Ukraine (thanks to its geographical position and a bridge
Bridge
A bridge is a structure built to span physical obstacles such as a body of water, valley, or road, for the purpose of providing passage over the obstacle...
over the Dnipro river), and a major river port on the main river of Ukraine.