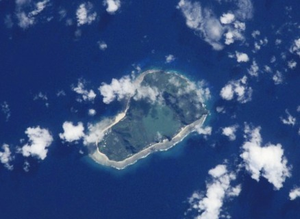 Tikopia is a small and high island
High island
In geology , a high island is an island of volcanic origin. The term can be used to distinguish such islands from low islands, whose origin is due to sedimentation or uplifting of coral reefs.-Definition and origin:...
in the southwestern Pacific Ocean
Pacific Ocean
The Pacific Ocean is the largest of the Earth's oceanic divisions. It extends from the Arctic in the north to the Southern Ocean in the south, bounded by Asia and Australia in the west, and the Americas in the east.At 165.2 million square kilometres in area, this largest division of the World...
. Covering an area of 5 km² (2 sq. mi.), the island is the remnant of an extinct volcano. Its highest point, Mt. Reani, reaches an elevation of 380 m (1,247 ft) above sea level
Sea level
Mean sea level is a measure of the average height of the ocean's surface ; used as a standard in reckoning land elevation...
. Lake Te Roto covers an old volcanic crater which is 80 m deep. 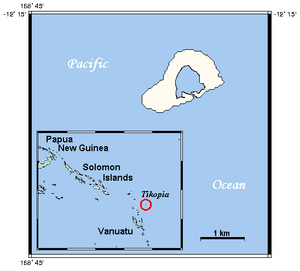 Tikopians practice an intensive system of agriculture (which has been compared to permaculture
Permaculture
Permaculture is an approach to designing human settlements and agricultural systems that is modeled on the relationships found in nature. It is based on the ecology of how things interrelate rather than on the strictly biological concerns that form the foundation of modern agriculture...
), similar in principle to forest gardening
Forest gardening
Forest gardening is a food production and agroforestry system based on woodland ecosystems, incorporating fruit and nut trees, shrubs, herbs, vines and perennial vegetables which have yields directly useful to humans...
and the gardens of the New Guinea
New Guinea
New Guinea is the world's second largest island, after Greenland, covering a land area of 786,000 km2. Located in the southwest Pacific Ocean, it lies geographically to the east of the Malay Archipelago, with which it is sometimes included as part of a greater Indo-Australian Archipelago...
highlands. Their agricultural practices are strongly and consciously tied to the population density
Population density
Population density is a measurement of population per unit area or unit volume. It is frequently applied to living organisms, and particularly to humans...
. For example, around 1600 AD, the people agreed to slaughter all pigs on the island, and substitute fishing, because the pigs were taking too much food that could be eaten by people.

Unlike the rapidly Westernizing society of much of the rest of Temotu province, Tikopia society is little changed from ancient times. Its people take great pride in their customs, and see themselves as holding fast to their Polynesian traditions while they regard the Melanesians
Melanesians
Melanesians are an ethnic group in Melanesia. The original inhabitants of the group of islands now named Melanesia were likely the ancestors of the present-day Papuan-speaking people...
around them to have lost most of theirs.

Four chiefs reign over the islands of Tikopia and Anuta
Anuta
Anuta is a small high island in the southeastern part of the Solomon Islands province of Temotu, the smallest permanently inhabited isolated Polynesian island.-Description:...
, still holding court in their huts.

Tikopians have a highly developed culture with a strong Polynesian influence, including a complex social structure.

New Zealand
New Zealand
New Zealand is an island country in the south-western Pacific Ocean comprising two main landmasses and numerous smaller islands. The country is situated some east of Australia across the Tasman Sea, and roughly south of the Pacific island nations of New Caledonia, Fiji, and Tonga...
anthropologist, Raymond Firth
Raymond Firth
Sir Raymond William Firth, CNZM, FBA, was an ethnologist from New Zealand. As a result of Firth's ethnographic work, actual behaviour of societies is separated from the idealized rules of behaviour within the particular society...
, who lived on Tikopia in 1928 and 1929, detailed the social life of Tikopia at that time. He showed how the society was divided geographically into two zones and was organized into four clans, headed by clan chiefs. At the core of social life was the te paito - the house inherited from male (patrilineal) ancestors, who were buried inside it. Relationships with the family grouping of one's mother (matrilateral
Matrilateral
The term Matrilateral describes kin 'on the mother's side'.Social anthropologists have underlined that even where a social group demonstrates a strong emphasis on one or other line of inheritance , relatives who fall outside this unilineal grouping will not simply be ignored...
relations) were also very important. The relations between a mother's brother and his nephew had a sacred dimension: the uncle oversaw the passage of his nephew through life, in particular, officiating at his manhood ceremonies
Coming of age
Coming of age is a young person's transition from childhood to adulthood. The age at which this transition takes place varies in society, as does the nature of the transition. It can be a simple legal convention or can be part of a ritual, as practiced by many societies...
. Intricate economic and ritual links between paito houses and deference to the chiefs within the clan organization were key dimensions of island life.

Raymond Firth speculates about the ways population control may have been achieved, including celibacy, warfare (including expulsion), infanticide and sea-voyaging (which claimed many youths). Currently, many young men leave the island, heading to either the Russell Islands
Russell Islands
The Russell Islands are two small islands, as well as several islets, of volcanic origin, in the Central Province of the Solomon Islands. They are located approximately 48 km northwest from Guadalcanal. The islands are partially covered in coconut plantations, and have a copra and oil factory at...
or the national capital, Honiara
Honiara
Honiara, population 49,107 , 78,190 , is the capital of the Solomon Islands and of Guadalcanal Province, although it is a separately administered town...
, in search of work. As a result of this outflow, population control is less necessary.

Cyclone Zoe
Cyclone Zoe
Severe Tropical Cyclone Zoe was the most intense tropical cyclone recorded in the Southern Hemisphere.-Meteorological history:...
in December 2002 devastated the vegetation and human settlements in Tikopia. Despite the extensive damage, no deaths were reported, as the islanders followed their traditions and sheltered in the caves in the higher ground. The narrow bank that separated the freshwater lagoon
Lagoon
A lagoon is a body of shallow sea water or brackish water separated from the sea by some form of barrier. The EU's habitat directive defines lagoons as "expanses of shallow coastal salt water, of varying salinity or water volume, wholly or partially separated from the sea by sand banks or shingle,...
from the sea was breached by the storm, resulting the continuing contamination of the lagoon and the threatened death of the sago
Sago
Sago is a starch extracted in the spongy center or pith, of various tropical palm stems, Metroxylon sagu. It is a major staple food for the lowland peoples of New Guinea and the Moluccas, where it is called saksak and sagu. A type of flour, called sago flour, is made from sago. The largest supply...
palms on which the islanders depend for survival. A remarkable international effort by "friends of" the island, including many yacht
Yacht
A yacht is a recreational boat or ship. The term originated from the Dutch Jacht meaning "hunt". It was originally defined as a light fast sailing vessel used by the Dutch navy to pursue pirates and other transgressors around and into the shallow waters of the Low Countries...
crews who had had contact with Tikopia over the decades, culminated in the construction of a gabion
Gabion
Gabions are cages, cylinders, or boxes filled with soil or sand that are used in civil engineering, road building, and military applications. For erosion control caged riprap is used. For dams or foundation construction, cylindrical metal structures are used...
dam
Dam
A dam is a barrier that impounds water or underground streams. Dams generally serve the primary purpose of retaining water, while other structures such as floodgates or levees are used to manage or prevent water flow into specific land regions. Hydropower and pumped-storage hydroelectricity are...
to seal the breach.

Some discussions of Tikopian society include its nearest neighbour, the even tinier island of Anuta
Anuta
Anuta is a small high island in the southeastern part of the Solomon Islands province of Temotu, the smallest permanently inhabited isolated Polynesian island.-Description:...
.

The Melanesian Mission (Anglican) first made contact with Tikopia in 1858. A mission teacher was not allowed to settle on Tikopia until 1907.