Encyclopedia
Melanesians are an ethnic group
Ethnic group
An ethnic group is a group of people whose members identify with each other, through a common heritage, often consisting of a common language, a common culture and/or an ideology that stresses common ancestry or endogamy...
in Melanesia
Melanesia
Melanesia is a subregion of Oceania extending from the western end of the Pacific Ocean to the Arafura Sea, and eastward to Fiji. The region comprises most of the islands immediately north and northeast of Australia...
. The original inhabitants of the group of islands now named Melanesia were likely the ancestors of the present-day Papuan
Papuan languages
The Papuan languages are those languages of the western Pacific which are neither Austronesian nor Australian. The term does not presuppose a genetic relationship. The concept of Papuan peoples as distinct from Melanesians was first suggested and named by Sidney Herbert Ray in 1892.-The...
-speaking people. They appear to have occupied these islands as far east as the main islands in the Solomon Islands
Solomon Islands
Solomon Islands is a sovereign state in Oceania, east of Papua New Guinea, consisting of nearly one thousand islands. It covers a land mass of . The capital, Honiara, is located on the island of Guadalcanal...
, including Makira
Makira
The island of Makira is the largest island of Makira-Ulawa Province in the Solomon Islands. The island is located east of Guadalcanal and south of Malaita. The largest and capital city is Kirakira....
and possibly the smaller islands farther to the east.

It was particularly along the north coast of New Guinea and in the islands north and east of New Guinea that the Austronesian people
Austronesian people
The Austronesian-speaking peoples are various populations in Oceania and Southeast Asia that speak languages of the Austronesian family. They include Taiwanese aborigines; the majority ethnic groups of East Timor, Indonesia, Malaysia, the Philippines, Brunei, Madagascar, Micronesia, and Polynesia,...
came into contact with these preexisting populations of Papuan-speaking peoples, probably around 4,000 years ago. There was probably a long period of interaction that resulted in many complex changes in genetics, languages, and culture. 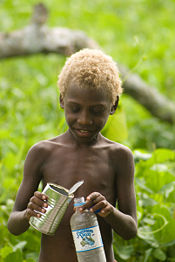 It was once postulated that from this area a very small group of people (speaking an Austronesian language) departed to the east to become the forebears of the Polynesian people. This theory was, however, contradicted by a study published by Temple University
Temple University
Temple University is a comprehensive public research university in Philadelphia, Pennsylvania, United States. Originally founded in 1884 by Dr. Russell Conwell, Temple University is among the nation's largest providers of professional education and prepares the largest body of professional...
finding that Polynesians and Micronesians have little genetic relation to Melanesians; instead, they found significant distinctions between groups living within the Melanesian islands. Genome scans show Polynesians have little genetic relationship to Melanesians.

While all humans outside of Africa are now known to have inherited some genes from Neanderthals, Melanesians are the only known modern humans whose prehistoric ancestors interbred with the Denisova hominin
Denisova hominin
Denisova hominins , or Denisovans, are Paleolithic-Era members of the genus Homo that may belong to a previously unknown species. In , scientists announced the discovery of a finger bone fragment of a juvenile female that lived about 41,000 years ago, found in Denisova Cave in Altai Krai, Russia, a...
, sharing 4%–6% of their genome with this ancient cousin of the Neanderthal.

Blond hair is exceptionally rare among those without European heritage, however Melanesians of some islands are one of the few non-European peoples and the only dark-skin group of humans known to have blond hair.
The source of this article is wikipedia, the free encyclopedia.  The text of this article is licensed under the GFDL.