Encyclopedia
Thunnus is a genus of ocean-dwelling fish
Fish
Fish are a paraphyletic group of organisms that consist of all gill-bearing aquatic vertebrate animals that lack limbs with digits. Included in this definition are the living hagfish, lampreys, and cartilaginous and bony fish, as well as various extinct related groups...
in the family Scombridae
Scombridae
Scombridae is the family of the mackerels, tunas, and bonitos, and thus includes many of the most important and familiar food fishes. The family consists of about 55 species in 15 genera and two subfamilies...
, all of which are tuna
Tuna
Tuna is a salt water fish from the family Scombridae, mostly in the genus Thunnus. Tuna are fast swimmers, and some species are capable of speeds of . Unlike most fish, which have white flesh, the muscle tissue of tuna ranges from pink to dark red. The red coloration derives from myoglobin, an...
, although other tuna species are found in other genera
Genus
In biology, a genus is a low-level taxonomic rank used in the biological classification of living and fossil organisms, which is an example of definition by genus and differentia...
. The name of the genus is the Latin
Latin
Latin is an Italic language originally spoken in Latium and Ancient Rome. It, along with most European languages, is a descendant of the ancient Proto-Indo-European language. Although it is considered a dead language, a number of scholars and members of the Christian clergy speak it fluently, and...
ized form of the Greek
Greek language
Greek is an independent branch of the Indo-European family of languages. Native to the southern Balkans, it has the longest documented history of any Indo-European language, spanning 34 centuries of written records. Its writing system has been the Greek alphabet for the majority of its history;...
θύννος, thýnnos, tuna, the word being first mentioned in Homer
Homer
In the Western classical tradition Homer , is the author of the Iliad and the Odyssey, and is revered as the greatest ancient Greek epic poet. These epics lie at the beginning of the Western canon of literature, and have had an enormous influence on the history of literature.When he lived is...
. Due to overfishing
Overfishing
Overfishing occurs when fishing activities reduce fish stocks below an acceptable level. This can occur in any body of water from a pond to the oceans....
the genus range has been significantly reduced, being effectively removed from the Caspian Sea, for example.

Their coloring, metallic blue on top and shimmering silver-white on the bottom, helps camouflage them from above and below.

They can grow to 15 feet long and weigh over 1,000 pounds. They can swim up to 50 miles per hour when pursuing prey.

There are eight species:
Atlantic bluefins are warm-blooded, which is a rare trait among fish, and are comfortable in the cold waters.
Bluefin fish are found in Newfoundland and Iceland, as well as the tropical waters of the Gulf of Mexico and the Mediterranean Sea, where they go each year to spawn.

Species of several other genera (all in the family Scombridae
Scombridae
Scombridae is the family of the mackerels, tunas, and bonitos, and thus includes many of the most important and familiar food fishes. The family consists of about 55 species in 15 genera and two subfamilies...
) also have common names containing tuna
Tuna
Tuna is a salt water fish from the family Scombridae, mostly in the genus Thunnus. Tuna are fast swimmers, and some species are capable of speeds of . Unlike most fish, which have white flesh, the muscle tissue of tuna ranges from pink to dark red. The red coloration derives from myoglobin, an...
. 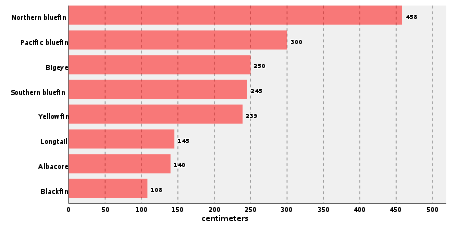 The worldwide demand for sushi
Sushi
is a Japanese food consisting of cooked vinegared rice combined with other ingredients . Neta and forms of sushi presentation vary, but the ingredient which all sushi have in common is shari...
and sashimi
Sashimi
Sashimi is a Japanese delicacy. It consists of very fresh raw meat, most commonly fish, sliced into thin pieces.-Origin:The word sashimi means "pierced body", i.e...
, coupled with increasing population growth, has resulted in global stocks of the species being overfished and bluefin is the most endangered and considered "a serious conservation concern". Complicating the efforts for sustainable management of bluefin fish stocks within national exclusive economic zones (EEZ
Exclusive Economic Zone
Under the law of the sea, an exclusive economic zone is a seazone over which a state has special rights over the exploration and use of marine resources, including production of energy from water and wind. It stretches from the seaward edge of the state's territorial sea out to 200 nautical...
) is bluefin migrate long distances and hunt in the mid ocean that isn't part of any country's EEZ and therefore have been vulnerable to overfishing by multiple countries' fishing fleets. International agreements and conventions are good faith agreements and are difficult to monitor or enforce. Though this fish has been farmed in captivity by the Japanese and by the Australians with the help of the Japanese, yields are lower than other farmed fish due to the slow growth rate of Bluefin tuna, therefore keeping prices high. In January 2011, a 342 kg bluefin tuna was sold at the Tsukiji fish market
Tsukiji fish market
The , commonly known as the , is the biggest wholesale fish and seafood market in the world and also one of the largest wholesale food markets of any kind. The market is located in Tsukiji in central Tokyo, and is a major attraction for foreign visitors....
in Tokyo for a record 32.49 million Yen (US$396,000).