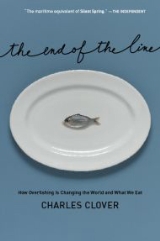 The End of the Line: How Overfishing Is Changing the World and What We Eat
Topic Home
Discussion
0
Definition

Encyclopedia
The End of The Line: How Overfishing Is Changing the World And What We Eat is a book by journalist
Journalist
A journalist collects and distributes news and other information. A journalist's work is referred to as journalism.A reporter is a type of journalist who researchs, writes, and reports on information to be presented in mass media, including print media , electronic media , and digital media A...
Charles Clover about overfishing
Overfishing
Overfishing occurs when fishing activities reduce fish stocks below an acceptable level. This can occur in any body of water from a pond to the oceans....
. Clover, an environment editor of the Daily Telegraph (London), describes how modern fishing is destroying ocean ecosystems. He concludes that current worldwide fish consumption is unsustainable. The book provides details about overfishing in many of the world's critical ocean habitats, such as the New England
New England
New England is a region in the northeastern corner of the United States consisting of the six states of Maine, New Hampshire, Vermont, Massachusetts, Rhode Island, and Connecticut...
fishing grounds, west African coastlines, the European North Atlantic fishing grounds, and the ocean around Japan. The book concludes with suggestions on how the nations of the world could engage in sustainable ocean fishing.

University of British Columbia
University of British Columbia
The University of British Columbia is a public research university. UBC’s two main campuses are situated in Vancouver and in Kelowna in the Okanagan Valley...
Professor of Fisheries Daniel Pauly
Daniel Pauly
Daniel Pauly is a French-born marine biologist, well-known for his work in studying human impacts on global fisheries. He is a professor and the project leader of the Sea Around Us Project at the Fisheries Centre at the University of British Columbia. He also served as Director of the Fisheries...
, reviewing the book for the Times Higher Education Supplement, praised the book: "It is entertaining, outrageous and a must-read for anyone who cares about the sea and its denizens, or even about our supply of seafood." The British
United Kingdom
The United Kingdom of Great Britain and Northern IrelandIn the United Kingdom and Dependencies, other languages have been officially recognised as legitimate autochthonous languages under the European Charter for Regional or Minority Languages...
newspaper The Independent
The Independent
The Independent is a British national morning newspaper published in London by Independent Print Limited, owned by Alexander Lebedev since 2010. It is nicknamed the Indy, while the Sunday edition, The Independent on Sunday, is the Sindy. Launched in 1986, it is one of the youngest UK national daily...
called it "persuasive and desperately disturbing," "the maritime equivalent of Silent Spring
Silent Spring
Silent Spring is a book written by Rachel Carson and published by Houghton Mifflin on 27 September 1962. The book is widely credited with helping launch the environmental movement....
...".

The book has been made into a documentary film
Documentary film
Documentary films constitute a broad category of nonfictional motion pictures intended to document some aspect of reality, primarily for the purposes of instruction or maintaining a historical record...
of the same name in 2009. End of the Line is a film based on the book. It examines the threatening extinction of the bluefin tuna, caused by increasing demand for sushi
Sushi
is a Japanese food consisting of cooked vinegared rice combined with other ingredients . Neta and forms of sushi presentation vary, but the ingredient which all sushi have in common is shari...
; the impact on populations, marine life and climate resulting from an imbalance in marine populations; and the starvation and hunger in coastal populations, caused by the possible extinction of fish in some waters, the possible loss of livelihoods as experienced in Newfoundland
Newfoundland and Labrador
Newfoundland and Labrador is the easternmost province of Canada. Situated in the country's Atlantic region, it incorporates the island of Newfoundland and mainland Labrador with a combined area of . As of April 2011, the province's estimated population is 508,400...
following the collapse of the cod
Cod
Cod is the common name for genus Gadus, belonging to the family Gadidae, and is also used in the common name for various other fishes. Cod is a popular food with a mild flavor, low fat content and a dense, flaky white flesh. Cod livers are processed to make cod liver oil, an important source of...
population, along with the potential remedies.

It premiered at the Sundance Film Festival
Sundance Film Festival
The Sundance Film Festival is a film festival that takes place annually in Utah, in the United States. It is the largest independent cinema festival in the United States. Held in January in Park City, Salt Lake City, and Ogden, as well as at the Sundance Resort, the festival is a showcase for new...
in the World Cinema Documentary Competition in Park City, Utah
Utah
Utah is a state in the Western United States. It was the 45th state to join the Union, on January 4, 1896. Approximately 80% of Utah's 2,763,885 people live along the Wasatch Front, centering on Salt Lake City. This leaves vast expanses of the state nearly uninhabited, making the population the...
, January 15-25, 2009. on December 7, 2009 at 10 pm ET/PT on CBC News Network's The Passionate Eye. The powerful documentary was filmed over 2 years at locations in England, Alaska Hong, Senegal
Senegal
Senegal , officially the Republic of Senegal , is a country in western Africa. It owes its name to the Sénégal River that borders it to the east and north...
, Tokyo
Tokyo
, ; officially , is one of the 47 prefectures of Japan. Tokyo is the capital of Japan, the center of the Greater Tokyo Area, and the largest metropolitan area of Japan. It is the seat of the Japanese government and the Imperial Palace, and the home of the Japanese Imperial Family...
, Hong Kong
Hong Kong
Hong Kong is one of two Special Administrative Regions of the People's Republic of China , the other being Macau. A city-state situated on China's south coast and enclosed by the Pearl River Delta and South China Sea, it is renowned for its expansive skyline and deep natural harbour...
, Nova Scotia
Nova Scotia
Nova Scotia is one of Canada's three Maritime provinces and is the most populous province in Atlantic Canada. The name of the province is Latin for "New Scotland," but "Nova Scotia" is the recognized, English-language name of the province. The provincial capital is Halifax. Nova Scotia is the...
, Malta
Malta
Malta , officially known as the Republic of Malta , is a Southern European country consisting of an archipelago situated in the centre of the Mediterranean, south of Sicily, east of Tunisia and north of Libya, with Gibraltar to the west and Alexandria to the east.Malta covers just over in...
and the Bahamas, following author, Charles Clover while he investigates those responsible for the dwindling marine population.

The film features Clover, along with tuna farmer turned whistle blower Roberto Mielgo, top scientists from around the world, indigenous fishermen and fisheries enforcement officials, who predict that seafood could potentially extinct in 2048. Labelled the Biggest Problem you’ve Never Heard of, The End of the Line illustrates the disastrous effects of overfishing, and rebukes myths of farmed fish as a solution. The film advocates consumer responsibility to purchase sustainable seafood, pleas with politicians and fishermen to acknowledge the chilling devastation of overfishing, and for no-take zones in the sea to protect marine life.

Celebrity chef Jamie Oliver
Jamie Oliver
James "Jamie" Trevor Oliver, MBE , sometimes known as The Naked Chef, is an English chef, restaurateur and media personality, known for his food-focused television shows, cookbooks and more recently his campaign against the use of processed foods in national schools...
and Japanese restaurant chain Nobu have come under criticism for not taking tuna off the menu. The Economist
Economist
An economist is a professional in the social science discipline of economics. The individual may also study, develop, and apply theories and concepts from economics and write about economic policy...
has called The End of the Line "the inconvenient truth about the impact of overfishing on the world’s oceans”. The film was directed by Rupert Murray
Rupert Murray
Rupert Murray is a film director working in London. Murray began by making television documentaries for Channel Four's Cutting Edge series including Playing For England and Seconds To Impact , and short films Outsiders and This Was My War, co-directed with Beadie Finzi.In 2005 he directed British...
, Executive Produced by Christopher Hird and Chris Gorell Barnes produced by George Duffield and Claire Lewis, and narrated by Ted Danson
Ted Danson
Edward Bridge “Ted” Danson III is an American actor best known for his role as central character Sam Malone in the sitcom Cheers, and his role as Dr. John Becker on the series Becker. He also plays a recurring role on Larry David's HBO sitcom Curb Your Enthusiasm and starred alongside Glenn Close...
.