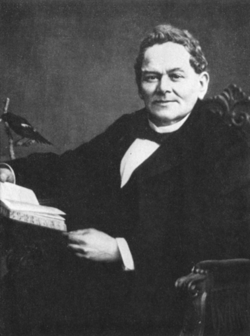 Hermann Schlegel was a German
Germany
Germany , officially the Federal Republic of Germany , is a federal parliamentary republic in Europe. The country consists of 16 states while the capital and largest city is Berlin. Germany covers an area of 357,021 km2 and has a largely temperate seasonal climate...
ornithologist and herpetologist.

Schlegel was born at Altenburg
Altenburg
Altenburg is a town in the German federal state of Thuringia, 45 km south of Leipzig. It is the capital of the Altenburger Land district.-Geography:...
, the son of a brassfounder. His father collected butterflies, which stimulated Schlegel's interest in natural history
Natural history
Natural history is the scientific research of plants or animals, leaning more towards observational rather than experimental methods of study, and encompasses more research published in magazines than in academic journals. Grouped among the natural sciences, natural history is the systematic study...
. The discovery, by chance, of a buzzard
Buzzard
A buzzard is one of several large birds, but there are a number of meanings as detailed below.-Old World:In the Old World Buzzard can mean:* One of several medium-sized, wide-ranging raptors with a robust body and broad wings....
's nest led him to the study of birds, and a meeting with Christian Ludwig Brehm
Christian Ludwig Brehm
Christian Ludwig Brehm was a German pastor and ornithologist. He was the father of Alfred Brehm.Brehm was born near Gotha, and studied at the University of Jena. In 1813 he became the minister at Renthendorf, a village sixty miles south of Leipzig, where he remained until his death...
.

Schlegel started to work for his father but soon tired of it. He travelled to Vienna
Vienna
Vienna is the capital and largest city of the Republic of Austria and one of the nine states of Austria. Vienna is Austria's primary city, with a population of about 1.723 million , and is by far the largest city in Austria, as well as its cultural, economic, and political centre...
in 1824 where, at the university, he attended the lectures of Leopold Fitzinger
Leopold Fitzinger
Leopold Joseph Franz Johann Fitzinger was an Austrian zoologist.Fitzinger was born in Vienna and studied botany at the university of Vienna under Nikolaus Joseph von Jacquin...
and Johann Jacob Heckel. A letter of introduction from Brehm to Joseph Natterer gained him a position at the Naturhistorisches Museum
Naturhistorisches Museum
The Naturhistorisches Museum Wien or NHMW is a large museum located in Vienna, Austria.The collections displayed cover , and the museum has a website providing an overview as a video virtual tour....
.

One year after his arrival, the director of this natural history museum, Carl Franz Anton Ritter von Schreibers
Carl Franz Anton Ritter von Schreibers
Carl Franz Anton Ritter von Schreibers was an Austrian naturalist who was a native of Pressburg, Hungary, Habsburg Empire . He earned his medical doctorate from Vienna in 1798, but also studied botany, mineralogy and zoology at the university...
, recommended him to Coenraad Jacob Temminck
Coenraad Jacob Temminck
Coenraad Jacob Temminck was a Dutch aristocrat and zoologist.Temminck was the first director of the National Natural History Museum at Leiden from 1820 until his death. His Manuel d'ornithologie, ou Tableau systematique des oiseaux qui se trouvent en Europe was the standard work on European birds...
, director of the natural history museum of Leiden
Rijksmuseum van Natuurlijke Historie
The Rijksmuseum van Natuurlijke Historie was a museum in Leiden, The Netherlands. It was founded in 1820 by Royal Decree, formed from a merger of several existing collections. This happened at the instigation of Coenraad Jacob Temminck, who saw the museum primarily as a research institute...
, who was seeking an assistant. At first Schlegel worked mainly on the reptile
Reptile
Reptiles are members of a class of air-breathing, ectothermic vertebrates which are characterized by laying shelled eggs , and having skin covered in scales and/or scutes. They are tetrapods, either having four limbs or being descended from four-limbed ancestors...
collection and wrote Essai sur la Physionomie des Serpens (1837), but soon his field of activity extended to other zoological groups. It had been intended that Schlegel be sent to Java to join the Natural History Commission, but the untimely death of Temminck's intended successor, Heinrich Boie
Heinrich Boie
Heinrich Boie was a German zoologist. He was the brother of Friedrich Boie. In the field of herpetology they described 49 new species of reptiles and several new species of amphibians....
, prevented the realization of this project.


Director of the natural history museum

When Temminck died at the beginning of 1858, Schlegel succeeded him as director of the natural history museum, after having spent 33 years under his direction. Schlegel was particularly interested in south-east Asia, and in 1857 sent his son Gustav to collect in birds in China
China
Chinese civilization may refer to:* China for more general discussion of the country.* Chinese culture* Greater China, the transnational community of ethnic Chinese.* History of China* Sinosphere, the area historically affected by Chinese culture...
. Gustav arrived to find that Robert Swinhoe
Robert Swinhoe
Robert Swinhoe FRS , was an English naturalist who worked as a Consul in Formosa. He discovered many Southeast Asian birds and several, such as Swinhoe's Pheasant, are named after him.-Biography:...
had got there first. In 1859 Schlegel sent Heinrich Agathon Bernstein
Heinrich Agathon Bernstein
Heinrich Agathon Bernstein was a German naturalist, zoologist and explorer from Breslau .-Early years:...
, to collect birds in New Guinea
New Guinea
New Guinea is the world's second largest island, after Greenland, covering a land area of 786,000 km2. Located in the southwest Pacific Ocean, it lies geographically to the east of the Malay Archipelago, with which it is sometimes included as part of a greater Indo-Australian Archipelago...
. After the death of Bernstein in 1865 he was succeeded by Hermann von Rosenberg
Hermann von Rosenberg
Hermann von Rosenberg was a German naturalist who was born in Darmstadt. In late 1839 he enlisted in the Dutch Harderwijk, and soon afterwards was stationed in the Netherlands East Indies as a military cartographer tasked with making topographical surveys. He spent 30 years of his life working in...
.

Schlegel took on a young assistant called Otto Finsch
Otto Finsch
Friedrich Hermann Otto Finsch was a German ethnographer, naturalist and colonial explorer.-Biography:...
. At the same time, he started to publish a scientific magazine, Notes from the Leyden Museum as well as a vast work of 14 volumes, Muséum d'histoire naturelle des Pays-Bas (1862-1880). He employed three talented illustrators: John Gerrard Keulemans
John Gerrard Keulemans
Johannes Gerardus Keulemans was a Dutch bird illustrator.-Biography and Work:...
, Joseph Smit
Joseph Smit
Joseph Smit was a Dutch zoological illustrator.-Background:...
and Joseph Wolf
Joseph Wolf
Joseph Wolf was a German artist who specialized in natural history illustration. He moved to the British Museum in 1848 and became the choice of illustrator for numerous explorers and collectors. He depicted animals accurately in life-like postures and has been considered one of the great pioneers...
.

The end of Schlegel's life was difficult: his wife died in 1864, Finsch moved to the natural history museum at Bremen, and the collections of the British Museum
British Museum
The British Museum is a museum of human history and culture in London. Its collections, which number more than seven million objects, are amongst the largest and most comprehensive in the world and originate from all continents, illustrating and documenting the story of human culture from its...
started to eclipse those of Leiden.
The source of this article is wikipedia, the free encyclopedia.  The text of this article is licensed under the GFDL.