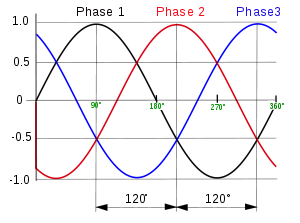 Using this, the waveforms for the three phases are

is the peak voltage and the voltages on L1, L2 and L3 are measured relative to the neutral
Ground and neutral
Since the neutral point of an electrical supply system is often connected to earth ground, ground and neutral are closely related. Under certain conditions, a conductor used to connect to a system neutral is also used for grounding of equipment and structures...
.

Generally, in electric power systems, the loads are distributed as evenly as is practical between the phases. It is usual practice to discuss a balanced system first and then describe the effects of unbalanced systems as deviations from the elementary case.

This refers to a system with a resistive load

between each phase and neutral.

An important property of three-phase power is that the power available to a resistive load,

, is constant at all times.

since we have eliminated

we can see that the total power does not vary with time. This is essential for keeping large generators and motors running smoothly.
Actually, the load need not be resistive for achieving a constant instantaneous power since, as long as it is balanced or the same for all phases, it may be written as

so that the peak current is

for all phases and the instantaneous currents are

Now the instantaneous powers in the phases are

which add up for a total instantaneous power

Since the three terms enclosed in square brackets are a three-phase system, they add up to zero and the total power becomes

For the case of equal loads on each of three phases, no net current flows in the neutral. The neutral current is the sum of the phase current.

We define a non-dimensionalized current,

Since we have shown that the neutral current is zero we can see that removing the neutral core will have no effect on the circuit, provided the system is balanced. Such connections are generally used only when the load on the three phases is part of the same piece of equipment (for example a three-phase motor), as otherwise switching loads and slight imbalances would cause large voltage fluctuations.

Prior to the invention of fluorescent lighting, it was common practice to provide a neutral conductor for three-phase systems rated at half the current carrying capacity of the phase conductors. With linear loads, the neutral only carries the current due to imbalance between the phases, which by design is not large. Fluorescent lighting and other non linear device draw current with a substantial third harmonic component. This third harmonic (and all harmonics divisible by three) current are in-phase on all the supply phases. These triplen currents sum in the neutral to three times the individual phase (third harmonic) currents. The neutral conductor must then have the same current rating as the phase conductors.

A number of switch mode power supplies draw current in pulses near the peak of the supply voltage. This narrow current pulse is not wide enough for any sort of cancellation with similar devices on other phases, resulting in neutral currents that can exceed the current of an individual phase. Switch mode power supplies operated on a three-phase system can produce neutral currents of 1.4 times the phase current, even when perfectly balanced in terms of load. These currents are caused by the harmonic currents. In Europe, switched mode supplies are required to have power factor
Power factor
The power factor of an AC electric power system is defined as the ratio of the real power flowing to the load over the apparent power in the circuit, and is a dimensionless number between 0 and 1 . Real power is the capacity of the circuit for performing work in a particular time...
correction to reduce this effect. An additional stage is added to the power supply so that current is drawn over a larger part of the voltage cycle. This is not yet a mandatory requirement in the United States, but the voluntary Energy Star
Energy Star
Energy Star is an international standard for energy efficient consumer products originated in the United States of America. It was first created as a United States government program during the early 1990s, but Australia, Canada, Japan, New Zealand, Taiwan and the European Union have also adopted...
program requires certain compliant power supplies to have a true power factor of at least 0.9.

Any polyphase system, by virtue of the time displacement of the currents in the phases, makes it possible to easily generate a magnetic field that revolves at the line frequency. Such a revolving magnetic field makes polyphase induction motor
Induction motor
An induction or asynchronous motor is a type of AC motor where power is supplied to the rotor by means of electromagnetic induction. These motors are widely used in industrial drives, particularly polyphase induction motors, because they are robust and have no brushes...
s possible. Indeed, where induction motors must run on single-phase power (such as is usually distributed in homes), the motor must contain some mechanism to produce a revolving field, otherwise the motor cannot generate any stand-still torque
Torque
Torque, moment or moment of force , is the tendency of a force to rotate an object about an axis, fulcrum, or pivot. Just as a force is a push or a pull, a torque can be thought of as a twist....
and will not start. The field produced by a single-phase winding can provide energy to a motor already rotating, but without auxiliary mechanisms the motor will not accelerate from a stop when energized.

A rotating magnetic field of steady amplitude requires that all three phase currents are equal in magnitude and accurately displaced one-third of a cycle in phase. Unbalanced operation results in undesirable effects on motors and generators.


Conversion to other phase systems

Provided two voltage waveforms have at least some relative displacement on the time axis, other than a multiple of a half-cycle, any other polyphase
Polyphase system
A polyphase system is a means of distributing alternating current electrical power. Polyphase systems have three or more energized electrical conductors carrying alternating currents with a definite time offset between the voltage waves in each conductor. Polyphase systems are particularly useful...
set of voltages can be obtained by an array of passive transformer
Transformer
A transformer is a device that transfers electrical energy from one circuit to another through inductively coupled conductors—the transformer's coils. A varying current in the first or primary winding creates a varying magnetic flux in the transformer's core and thus a varying magnetic field...
s. Such arrays will evenly balance the polyphase load between the phases of the source system. For example, balanced two-phase power can be obtained from a three-phase network by using two specially constructed transformers, with taps at 50% and 86.6% of the primary voltage. This Scott T connection
Scott-T transformer
A Scott-T transformer is a type of circuit used to derive two-phase current from a three-phase source or vice-versa. The Scott connection evenly distributes a balanced load between the phases of the source....
produces a true two-phase system with 90° time difference between the phases. Another example is the generation of higher-phase-order systems for large rectifier
Rectifier
A rectifier is an electrical device that converts alternating current , which periodically reverses direction, to direct current , which flows in only one direction. The process is known as rectification...
systems, to produce a smoother DC
Direct current
Direct current is the unidirectional flow of electric charge. Direct current is produced by such sources as batteries, thermocouples, solar cells, and commutator-type electric machines of the dynamo type. Direct current may flow in a conductor such as a wire, but can also flow through...
output and to reduce the harmonic
Harmonic
A harmonic of a wave is a component frequency of the signal that is an integer multiple of the fundamental frequency, i.e. if the fundamental frequency is f, the harmonics have frequencies 2f, 3f, 4f, . . . etc. The harmonics have the property that they are all periodic at the fundamental...
currents in the supply.