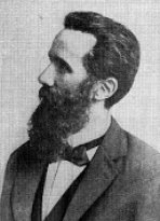 Encyclopedia
Galileo Ferraris was an Italian physicist
Physicist
A physicist is a scientist who studies or practices physics. Physicists study a wide range of physical phenomena in many branches of physics spanning all length scales: from sub-atomic particles of which all ordinary matter is made to the behavior of the material Universe as a whole...
and electrical engineer, noted mostly for the studies and independent discovery of the rotating magnetic field
Rotating magnetic field
A rotating magnetic field is a magnetic field which changes direction at a constant angular rate. This is a key principle in the operation of the alternating-current motor. Nikola Tesla claimed in his autobiography that he identified the concept of the rotating magnetic field in 1882. In 1885,...
, a basic working principle of the induction motor
Induction motor
An induction or asynchronous motor is a type of AC motor where power is supplied to the rotor by means of electromagnetic induction. These motors are widely used in industrial drives, particularly polyphase induction motors, because they are robust and have no brushes...
. Ferraris has published an extensive and complete monograph on the experimental results obtained with open-circuit transformers of the type designed by the power engineers Lucien Gaulard
Lucien Gaulard
Lucien Gaulard invented devices for the transmission of alternating current electrical energy.-Biography:Gaulard was born in Paris, France....
and John Dixon Gibbs.

Born at Livorno Piemonte, Ferraris gained a bachelor's degree in engineering and became an assistant of technical physics near the Regal Italian Industrial Museum. Ferraris independently researched the rotary magnetic field
Rotating magnetic field
A rotating magnetic field is a magnetic field which changes direction at a constant angular rate. This is a key principle in the operation of the alternating-current motor. Nikola Tesla claimed in his autobiography that he identified the concept of the rotating magnetic field in 1882. In 1885,...
in 1885. Ferraris experimented with different types of asynchronous electric motors. The research and his studies resulted in the development of an alternating-current motor
Alternator
An alternator is an electromechanical device that converts mechanical energy to electrical energy in the form of alternating current.Most alternators use a rotating magnetic field but linear alternators are occasionally used...
. On the 11th of March 1888, Ferraris published his research in a paper to the Royal Academy of Sciences in Turin
Turin
Turin is a city and major business and cultural centre in northern Italy, capital of the Piedmont region, located mainly on the left bank of the Po River and surrounded by the Alpine arch. The population of the city proper is 909,193 while the population of the urban area is estimated by Eurostat...
(two months later Nikola Tesla
Nikola Tesla
Nikola Tesla was a Serbian-American inventor, mechanical engineer, and electrical engineer...
gained , application field October 12, 1887. Serial Number 252,132). These motors operating by systems of alternating currents displaced from one another in phase by definite amounts and producing what is known as the rotating magnetic field. This invention seems destined to be one of the most important that has been made in the history of electricity. The result of the introduction of polyphase systems has been the ability to transmit power economically for considerable distances, and, as this directly operated to make possible the utilization of water-power in remote places and the distribution of power over large areas, the immediate outcome of the polyphase system was power transmission; and the outcome of power transmission almost surely will be the gradual supersession of coal and the harnessing of the waste forces of Nature to do useful work.

In 1889, Ferraris worked at the Italian Industrial Institution, a school of electrical engineering (the first school of this kind in Italy; subsequently incorporated in the Politecnico di Torino). In 1896, Ferraris joined the Italian Electrotechnical Association and became the first national president of the organization.

Galileo Ferraris researched the fundamental properties of dioptric instruments and made elementary representation of the theory and its applications. His work contains a detailed description of the geometric dioptrics for uncentered systems. He provided a greater generality as previously found in the telescopic system treatments, so the one in which the fundamental points were missing.
In the second main sections, the results obtained are applied to optical instruments. This was dealt with in great detail the magnification, field of view and the brightness of the instrument. The field denned as the author of that cone opening angle, the tip of the first main points of the lens and its base formed by the parts of the object in view, will possess the same brightness. The eye is not treated.

The City of Turin honored the services which Ferraris rendered to science. A general committee proposed addition of a Royal Industrial Museum of Turin, a permanent monument commemorating his scientific and industrial achievements.