They shall not pass
Topic Home
Discussion
0 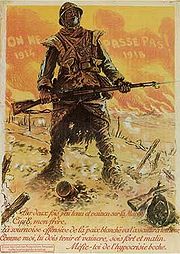 "They shall not pass" (French
French language
French is a Romance language spoken as a first language in France, the Romandy region in Switzerland, Wallonia and Brussels in Belgium, Monaco, the regions of Quebec and Acadia in Canada, and by various communities elsewhere. Second-language speakers of French are distributed throughout many parts...
: ""; Spanish
Spanish language
Spanish , also known as Castilian , is a Romance language in the Ibero-Romance group that evolved from several languages and dialects in central-northern Iberia around the 9th century and gradually spread with the expansion of the Kingdom of Castile into central and southern Iberia during the...
: "") is a slogan
Slogan
A slogan is a memorable motto or phrase used in a political, commercial, religious and other context as a repetitive expression of an idea or purpose. The word slogan is derived from slogorn which was an Anglicisation of the Scottish Gaelic sluagh-ghairm . Slogans vary from the written and the...
used to express determination to defend a position against an enemy.

It was most famously used during the Battle of Verdun
Battle of Verdun
The Battle of Verdun was one of the major battles during the First World War on the Western Front. It was fought between the German and French armies, from 21 February – 18 December 1916, on hilly terrain north of the city of Verdun-sur-Meuse in north-eastern France...
in World War I
World War I
World War I , which was predominantly called the World War or the Great War from its occurrence until 1939, and the First World War or World War I thereafter, was a major war centred in Europe that began on 28 July 1914 and lasted until 11 November 1918...
by French General Robert Nivelle
Robert Nivelle
Robert Georges Nivelle was a French artillery officer who served in the Boxer Rebellion, and the First World War. In May 1916, he was given command of the French Third Army in the Battle of Verdun, leading counter-offensives that rolled back the German forces in late 1916...
. It appears on propaganda posters, such as that by Maurice Neumont after the Second Battle of the Marne
Second Battle of the Marne
The Second Battle of the Marne , or Battle of Reims was the last major German Spring Offensive on the Western Front during the First World War. The German attack failed when an Allied counterattack led by France overwhelmed the Germans, inflicting severe casualties...
, which was later adopted on uniform badges by units manning the Maginot Line
Maginot Line
The Maginot Line , named after the French Minister of War André Maginot, was a line of concrete fortifications, tank obstacles, artillery casemates, machine gun posts, and other defences, which France constructed along its borders with Germany and Italy, in light of its experience in World War I,...
. Later during the war, it also was used by Romanian
Romanians
The Romanians are an ethnic group native to Romania, who speak Romanian; they are the majority inhabitants of Romania....
soldiers during the Battle of Mărăşeşti
Battle of Marasesti
The Battle of Mărăşeşti, Vrancea County, eastern Romania was a major battle fought during World War I between Germany and Romania.-Premise:...
.

It was also used during the Spanish Civil War
Spanish Civil War
The Spanish Civil WarAlso known as The Crusade among Nationalists, the Fourth Carlist War among Carlists, and The Rebellion or Uprising among Republicans. was a major conflict fought in Spain from 17 July 1936 to 1 April 1939...
, this time at the Siege of Madrid by Dolores Ibárruri Gómez
Dolores Ibárruri
Isidora Dolores Ibárruri Gómez , known more famously as "La Pasionaria" was a Spanish Republican leader of the Spanish Civil War and communist politician of Basque origin...
, a member of the Communist Party of Spain
Communist Party of Spain
The Communist Party of Spain is the third largest national political party in Spain. It is the largest member organization of the United Left electoral coalition and has influence in the largest trade union in Spain, Workers' Commissions ....
, in her famous "" speech on 18 July 1936. The leader of the nationalist forces, Generalissimo
Generalissimo
Generalissimo and Generalissimus are military ranks of the highest degree, superior to Field Marshal and other five-star ranks.-Usage:...
Francisco Franco
Francisco Franco
Francisco Franco y Bahamonde was a Spanish general, dictator and head of state of Spain from October 1936 , and de facto regent of the nominally restored Kingdom of Spain from 1947 until his death in November, 1975...
, upon gaining Madrid
Madrid
Madrid is the capital and largest city of Spain. The population of the city is roughly 3.3 million and the entire population of the Madrid metropolitan area is calculated to be 6.271 million. It is the third largest city in the European Union, after London and Berlin, and its metropolitan...
, responded to this slogan with "" ("We have passed").

"" was used by British anti-fascists during the October 1936 Battle of Cable Street
Battle of Cable Street
The Battle of Cable Street took place on Sunday 4 October 1936 in Cable Street in the East End of London. It was a clash between the Metropolitan Police, overseeing a march by the British Union of Fascists, led by Oswald Mosley, and anti-fascists, including local Jewish, socialist, anarchist,...
, and is still used in this context in some political circles. It was often accompanied by the words (we will pass) to indicate that communists rather than fascists will be the ones to seize state power
State power
State power may refer to:*Police power, the capacity of a state to regulate behaviours and enforce order within its territory*Government force, state coercion to induce conforming social results* The extroverted concept of power in international relations...
.

The phrase was used again in December 2002 by Colonel Emmanuel Maurin, commanding a French Foreign Legion
French Foreign Legion
The French Foreign Legion is a unique military service wing of the French Army established in 1831. The foreign legion was exclusively created for foreign nationals willing to serve in the French Armed Forces...
unit in the Ivory Coast; this did not have communist or radical left
Radical left
Radical left is a term used in the names of several political movements:* Det Radikale Venstre, a social-liberal party in Denmark* Radical Party of the Left , a social-liberal party in France...
connotations. In last quarter of 2009, it has been used in the political propaganda of Estonia
Estonia
Estonia , officially the Republic of Estonia , is a state in the Baltic region of Northern Europe. It is bordered to the north by the Gulf of Finland, to the west by the Baltic Sea, to the south by Latvia , and to the east by Lake Peipsi and the Russian Federation . Across the Baltic Sea lies...
by the Estonian Centre Party
Estonian Centre Party
The Estonian Centre Party is a centrist, social liberal party in Estonia. Keskerakond is a member of the European Liberal Democrat and Reform Party. It has the largest membership of an Estonian party, with over 12 000 members....
.

In February 2011 "No pasarán!" was used by leftist demonstrators blockading a street in Dresden to stop a neo-Nazi march.

For years the term was used by Serbs in Kosovo, as "Alban no passaran", meaning "Albanians will not pass!" as a slogan for defending the Ibar bridge and protecting the enclaves against the Kosovo Albanians.

Jan Drda
Jan Drda
Jan Drda was a Czech prose writer and playwright.He was a member of the Communist Party of Czechoslovakia since 1945...
in his Silent Barricade (1949), the last short story called as the same as the book, uses the term "NO PASSARAN" while three men are defending the last barricade in Prague, Czech republic, against the Nazi German Army in World War II
World War II
World War II, or the Second World War , was a global conflict lasting from 1939 to 1945, involving most of the world's nations—including all of the great powers—eventually forming two opposing military alliances: the Allies and the Axis...
.
One of them, a Czech veteran of the Spanish Civil War, writes the first three letters of "No passaran" on the side of a tram, used as the barricade. The sign is then completed by his comrade, a Dutch veteran.

Emil Renard in Max Brooks
Max Brooks
Maximillian Michael "Max" Brooks is an American author and screenwriter, with a particular interest in zombies. Brooks is also a television and voice-over actor.- Early life and education :...
's World War Z
World War Z
World War Z: An Oral History of the Zombie War is a 2006 post-apocalyptic horror novel by Max Brooks. It is a follow-up to his 2003 book The Zombie Survival Guide. Rather than a grand overview or narrative, World War Z is a collection of individual accounts in the form of first-person anecdote...
uttered the last words over his radio "On ne passe pas!" while fighting zombies, as told by his brother Andre Renard to the narrator.

In Ian McEwan
Ian McEwan
Ian Russell McEwan CBE, FRSA, FRSL is a British novelist and screenwriter, and one of Britain's most highly regarded writers. In 2008, The Times named him among their list of "The 50 greatest British writers since 1945"....
's novel Saturday, Jay Strauss calls Henry Perowne to their last round of squash
Squash (sport)
Squash is a high-speed racquet sport played by two players in a four-walled court with a small, hollow rubber ball...
, saying "Fight to the Death" and "No parasan!"

In Metro 2033 the communist brigade that saves Artyom in Tverskaya station quote this slogan when parting with him in Paveleskaya station.

In the Star Wars
Star Wars
Star Wars is an American epic space opera film series created by George Lucas. The first film in the series was originally released on May 25, 1977, under the title Star Wars, by 20th Century Fox, and became a worldwide pop culture phenomenon, followed by two sequels, released at three-year...
New Jedi Order book Traitor, Jedi Knight Ganner Rhysode uttered one variant of this phrase–"None shall pass"–as he defended a passage way against hordes of enemies, earning such regard for himself he is said to have become deified in the Yuuzhan Vong
Yuuzhan Vong
The Yuuzhan Vong are a group of fictional characters from the Star Wars Expanded Universe. They rise as a threat to the New Republic in the New Jedi Order series of novels....
pantheon
Pantheon (gods)
A pantheon is a set of all the gods of a particular polytheistic religion or mythology.Max Weber's 1922 opus, Economy and Society discusses the link between a...
.

In Simon R. Green's Nightside series, the narrator John Taylor expresses some surprise that the legendarily resolute and immovable Doorman of the world's oldest members-only club did not have a sash proclaiming "They Shall Not Pass".

The phrase was also famously used by te Sandinistas in Nicaragua, and immortalised in the Carlos Godoy song "No Pasaran!'