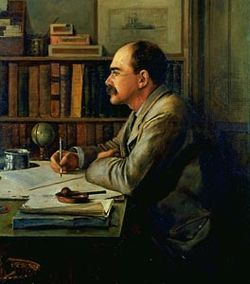 The Ritual of the Calling of an Engineer is a ritual
Ritual
A ritual is a set of actions, performed mainly for their symbolic value. It may be prescribed by a religion or by the traditions of a community. The term usually excludes actions which are arbitrarily chosen by the performers....
for students about to graduate from an engineering
Engineering
Engineering is the discipline, art, skill and profession of acquiring and applying scientific, mathematical, economic, social, and practical knowledge, in order to design and build structures, machines, devices, systems, materials and processes that safely realize improvements to the lives of...
program at a university in Canada
Canada
Canada is a North American country consisting of ten provinces and three territories. Located in the northern part of the continent, it extends from the Atlantic Ocean in the east to the Pacific Ocean in the west, and northward into the Arctic Ocean...
. Participation may also be permitted for Canadian professional engineer
Professional Engineer
Regulation of the engineering profession is established by various jurisdictions of the world to protect the safety, well-being and other interests of the general public, and to define the licensure process through which an engineer becomes authorized to provide professional services to the...
s and registered engineers-in-training who received training elsewhere. The ritual is administered by a body called The Corporation of the Seven Wardens. Each participant is conferred the Iron Ring
Iron Ring
The Iron Ring is a ring worn by many engineers in Canada as a symbol and reminder of the obligations and ethics associated with the profession. Obtaining the ring is an optional endeavour, as it is not a prerequisite to becoming a Professional Engineer...
as part of the ritual.

The ritual traces its origins to Professor H. E. T. Haultain
H. E. T. Haultain
Herbert Edward Terrick Haultain was a Canadian engineer and inventor.He was born in Brighton, England and died in Toronto, Ontario. He graduated from the University of Toronto with a degree in civil engineering from the School of Practical Science in 1889...
of the University of Toronto
University of Toronto
The University of Toronto is a public research university in Toronto, Ontario, Canada, situated on the grounds that surround Queen's Park. It was founded by royal charter in 1827 as King's College, the first institution of higher learning in Upper Canada...
, who believed and persuaded other members of the Engineering Institute of Canada
Engineering Institute of Canada
The Engineering Institute of Canada is a federation of twelve engineering societies based in Canada, covering a broad range of engineering branches, and with a history going back to 1887...
that there needed to be a ceremony and standard of ethics developed for graduating engineers. The ritual was created in 1922 by Rudyard Kipling
Rudyard Kipling
Joseph Rudyard Kipling was an English poet, short-story writer, and novelist chiefly remembered for his celebration of British imperialism, tales and poems of British soldiers in India, and his tales for children. Kipling received the 1907 Nobel Prize for Literature...
at the request of Haultain, representing seven past-presidents of the Engineering Institute of Canada. The seven past-presidents were the original seven Wardens of the Corporation.
An inaugural ceremony was held in the evening of April 25, 1925, at the University Club of Montreal, when the obligation was taken by six engineers, some of whom where involved with Kipling in its development. On May 1st, 1925, three of these newly obligated engineers met at the University of Toronto with a number of the officers of the Engineering Alumni Association and obligated 14 of them in the Senate Chamber of the University becoming the first local chapter (referred to as a Camp) to do so. The Ritual and the conferring of the Iron Ring continues to be administered by The Corporation of the Seven Wardens Inc./Société des Sept Gardiens inc. through Camps associated with the universities granting degrees in engineering in Canada.

The ritual takes place separately at individual universities across Canada. Although the ceremonies are separate, each university is also grouped into one of 25 camps of the Corporation of the Seven Wardens for administrative purposes.

The Obligation
Obligation
An obligation is a requirement to take some course of action, whether legal or moral. There are also obligations in other normative contexts, such as obligations of etiquette, social obligations, and possibly...
, which is not an oath
Oath
An oath is either a statement of fact or a promise calling upon something or someone that the oath maker considers sacred, usually God, as a witness to the binding nature of the promise or the truth of the statement of fact. To swear is to take an oath, to make a solemn vow...
but a solemn expression of intention, is subscribed to at the ceremony
Ceremony
A ceremony is an event of ritual significance, performed on a special occasion. The word may be of Etruscan origin.-Ceremonial occasions:A ceremony may mark a rite of passage in a human life, marking the significance of, for example:* birth...
. The Obligation essentially states the duties and responsibilities of the engineer. Following the Obligation, the Iron Ring
Iron Ring
The Iron Ring is a ring worn by many engineers in Canada as a symbol and reminder of the obligations and ethics associated with the profession. Obtaining the ring is an optional endeavour, as it is not a prerequisite to becoming a Professional Engineer...
is placed on the little finger
Little finger
The little finger, often called the pinky in American English, pinkie in Scottish English , or small finger in medicine, is the most ulnar and usually smallest finger of the human hand, opposite the thumb, next to the ring finger.-Muscles:There are four muscles that...
of the working hand, and is worn by the engineer as a symbol
Symbol
A symbol is something which represents an idea, a physical entity or a process but is distinct from it. The purpose of a symbol is to communicate meaning. For example, a red octagon may be a symbol for "STOP". On a map, a picture of a tent might represent a campsite. Numerals are symbols for...
and a reminder. As originally conceived, the Engineer's iron ring rubs against the drawings and paper upon which the Engineer writes.

The Obligation is private
Privacy
Privacy is the ability of an individual or group to seclude themselves or information about themselves and thereby reveal themselves selectively...
, though not necessarily secret
Secrecy
Secrecy is the practice of hiding information from certain individuals or groups, perhaps while sharing it with other individuals...
. However, it is customary for those who have gone through it to not discuss the details of the Calling with others, even engineers from other countries. The ceremony is open only to candidates or those who have already undergone the ritual.

As part of the preparation for the ritual, candidates are instructed not to discuss the details of the ritual with the media. A reminder of this is provided at the end of the ceremony in the form of a written instruction that states: "The Rule of Governance provides that there shall be no publicity in connection with the Ritual."

Commemorating the 75th anniversary, the Ritual of the Calling of an Engineer domestic-rate stamp was issued on April 25, 2000. Designer Darrell Freeman's "head-to-foot" layout incorporates the symbolic iron ring that is presented as part of the ceremony. The ring also visually links the four engineering achievements featured on this stamp.

The Iron Ring may be made from either iron
Iron
Iron is a chemical element with the symbol Fe and atomic number 26. It is a metal in the first transition series. It is the most common element forming the planet Earth as a whole, forming much of Earth's outer and inner core. It is the fourth most common element in the Earth's crust...
or stainless steel
Stainless steel
In metallurgy, stainless steel, also known as inox steel or inox from French "inoxydable", is defined as a steel alloy with a minimum of 10.5 or 11% chromium content by mass....
. Presently, only Camp One of the Corporation in Toronto
Toronto
Toronto is the provincial capital of Ontario and the largest city in Canada. It is located in Southern Ontario on the northwestern shore of Lake Ontario. A relatively modern city, Toronto's history dates back to the late-18th century, when its land was first purchased by the British monarchy from...
continues to confer rings made from iron; stainless steel rings are conferred at all other locations across Canada. The Iron Ring does not certify a person as a Professional Engineer
Professional Engineer
Regulation of the engineering profession is established by various jurisdictions of the world to protect the safety, well-being and other interests of the general public, and to define the licensure process through which an engineer becomes authorized to provide professional services to the...
, which requires registration with a relevant professional organization followed by examination and practical experience.


The Corporation of the Seven Wardens

The Corporation of the Seven Wardens (French
French language
French is a Romance language spoken as a first language in France, the Romandy region in Switzerland, Wallonia and Brussels in Belgium, Monaco, the regions of Quebec and Acadia in Canada, and by various communities elsewhere. Second-language speakers of French are distributed throughout many parts...
: Société des Sept Gardiens) is the body that holds the rights and the duty to carry out The Ritual of the Calling of an Engineer. It is organized into 25 regional branches, called camps, numbered by order of establishment. The term camp is used to describe these regional branches because it conveys a smaller, close-knit sense of community.