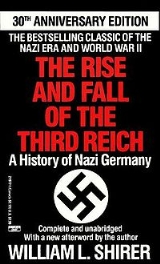 Encyclopedia
The Rise and Fall of the Third Reich is a 1960 non-fiction
Non-fiction
Non-fiction is the form of any narrative, account, or other communicative work whose assertions and descriptions are understood to be fact...
book by William L. Shirer
William L. Shirer
William Lawrence Shirer was an American journalist, war correspondent, and historian, who wrote The Rise and Fall of the Third Reich, a history of Nazi Germany read and cited in scholarly works for more than 50 years...
chronicling the general history of Nazi Germany
Nazi Germany
Nazi Germany , also known as the Third Reich , but officially called German Reich from 1933 to 1943 and Greater German Reich from 26 June 1943 onward, is the name commonly used to refer to the state of Germany from 1933 to 1945, when it was a totalitarian dictatorship ruled by...
from 1933 to 1945. The book is based upon captured Third Reich documents, the available diaries of propaganda minister Joseph Goebbels
Joseph Goebbels
Paul Joseph Goebbels was a German politician and Reich Minister of Propaganda in Nazi Germany from 1933 to 1945. As one of Adolf Hitler's closest associates and most devout followers, he was known for his zealous oratory and anti-Semitism...
, General Franz Halder
Franz Halder
Franz Halder was a German General and the head of the Army General Staff from 1938 until September, 1942, when he was dismissed after frequent disagreements with Adolf Hitler.-Early life:...
, and of the Italian Foreign Minister Galeazzo Ciano
Galeazzo Ciano
Gian Galeazzo Ciano, 2nd Count of Cortellazzo and Buccari was an Italian Minister of Foreign Affairs and Benito Mussolini's son-in-law. In early 1944 Count Ciano was shot by firing squad at the behest of his father-in-law, Mussolini under pressure from Nazi Germany.-Early life:Ciano was born in...
, evidence and testimony from the Nuremberg trials
Nuremberg Trials
The Nuremberg Trials were a series of military tribunals, held by the victorious Allied forces of World War II, most notable for the prosecution of prominent members of the political, military, and economic leadership of the defeated Nazi Germany....
, British Foreign Office reports, and the author’s recollections of six years’ of Third Reich reportage, for newspapers, the United Press International
United Press International
United Press International is a once-major international news agency, whose newswires, photo, news film and audio services provided news material to thousands of newspapers, magazines and radio and television stations for most of the twentieth century...
(UPI), and CBS Radio
CBS Radio
CBS Radio, Inc., formerly known as Infinity Broadcasting Corporation, is one of the largest owners and operators of radio stations in the United States, third behind main rival Clear Channel Communications and Cumulus Media. CBS Radio owns around 130 radio stations across the country...
, ended by Nazi Party censorship in 1940. In 1961, The Rise and Fall of the Third Reich earned a National Book Award
National Book Award
The National Book Awards are a set of American literary awards. Started in 1950, the Awards are presented annually to American authors for literature published in the current year. In 1989 the National Book Foundation, a nonprofit organization which now oversees and manages the National Book...
, and was adapted to television as a sort of miniseries
Miniseries
A miniseries , in a serial storytelling medium, is a television show production which tells a story in a limited number of episodes. The exact number is open to interpretation; however, they are usually limited to fewer than a whole season. The term "miniseries" is generally a North American term...
and broadcast by the American Broadcasting Company
American Broadcasting Company
The American Broadcasting Company is an American commercial broadcasting television network. Created in 1943 from the former NBC Blue radio network, ABC is owned by The Walt Disney Company and is part of Disney-ABC Television Group. Its first broadcast on television was in 1948...
network in 1968. Three hours long, the program was telecast one hour a night over three nights.

The Rise and Fall of the Third Reich: A History of Nazi Germany is a comprehensive historical synthesis of the Nazi
Nazism
Nazism, the common short form name of National Socialism was the ideology and practice of the Nazi Party and of Nazi Germany...
era, positing that German history logically proceeded from Martin Luther
Martin Luther
Martin Luther was a German priest, professor of theology and iconic figure of the Protestant Reformation. He strongly disputed the claim that freedom from God's punishment for sin could be purchased with money. He confronted indulgence salesman Johann Tetzel with his Ninety-Five Theses in 1517...
to Adolf Hitler
Adolf Hitler
Adolf Hitler was an Austrian-born German politician and the leader of the National Socialist German Workers Party , commonly referred to as the Nazi Party). He was Chancellor of Germany from 1933 to 1945, and head of state from 1934 to 1945...
; that Hitler’s ascension to power was an expression of German national
Nationalism
Nationalism is a political ideology that involves a strong identification of a group of individuals with a political entity defined in national terms, i.e. a nation. In the 'modernist' image of the nation, it is nationalism that creates national identity. There are various definitions for what...
character, not an expression of the totalitarianism
Totalitarianism
Totalitarianism is a political system where the state recognizes no limits to its authority and strives to regulate every aspect of public and private life wherever feasible...
in ideologic vogue during the 1930s. Author William L. Shirer summarised his perspective: “...the course of German history... made blind obedience to temporal rulers the highest virtue of Germanic man, and put a premium on servility.” This reportorial perspective, the Sonderweg
Sonderweg
Sonderweg is a controversial theory in German historiography that considers the German-speaking lands, or the country Germany, to have followed a unique course from aristocracy into democracy, distinct from other European countries...
(Special path) thesis of German history, was then common to American scholarship
Scholarly method
Scholarly method or scholarship is the body of principles and practices used by scholars to make their claims about the world as valid and trustworthy as possible, and to make them known to the scholarly public.-Methods:...
; yet, despite extensive footnotes and references, some academic critics consider its interpretation of Nazism
Nazism
Nazism, the common short form name of National Socialism was the ideology and practice of the Nazi Party and of Nazi Germany...
flawed. Moreover, the history also includes (identified) speculation, such as the theory that SS Chief Heinrich Müller afterwards joined the NKVD
NKVD
The People's Commissariat for Internal Affairs was the public and secret police organization of the Soviet Union that directly executed the rule of power of the Soviets, including political repression, during the era of Joseph Stalin....
of the USSR
Soviet Union
The Soviet Union , officially the Union of Soviet Socialist Republics , was a constitutionally socialist state that existed in Eurasia between 1922 and 1991....
.

Upon publication on 17 October 1960, The Rise and Fall of the Third Reich: A History of Nazi Germany, sold more than one million hardback copies, two thirds via the Book of the Month Club
Book of the Month Club
The Book of the Month Club is a United States mail-order book sales club that offers a new book each month to customers.The Book of the Month Club is part of a larger company that runs many book clubs in the United States and Canada. It was formerly the flagship club of Book-of-the-Month Club, Inc...
, and more than a million paperback copies. Its critical recognition as a great history book, and its popular success, surprised author Shirer, because, in that time, 1960, fifteen-years removed from the end of the Second World War
World War II
World War II, or the Second World War , was a global conflict lasting from 1939 to 1945, involving most of the world's nations—including all of the great powers—eventually forming two opposing military alliances: the Allies and the Axis...
(1939–45), neither author nor publisher thought there existed much historical interest in either Adolf Hitler
Adolf Hitler
Adolf Hitler was an Austrian-born German politician and the leader of the National Socialist German Workers Party , commonly referred to as the Nazi Party). He was Chancellor of Germany from 1933 to 1945, and head of state from 1934 to 1945...
(1889–1945) or Nazi Germany
Nazi Germany
Nazi Germany , also known as the Third Reich , but officially called German Reich from 1933 to 1943 and Greater German Reich from 26 June 1943 onward, is the name commonly used to refer to the state of Germany from 1933 to 1945, when it was a totalitarian dictatorship ruled by...
(1933–45), hence commissioned an initial print run of only 12,500 copies.

The book sold well in Britain, France, Italy, and in West Germany, because of its international recognition, bolstered by local, German editorial attacks. In 1961, it won the National Book Award
National Book Award
The National Book Awards are a set of American literary awards. Started in 1950, the Awards are presented annually to American authors for literature published in the current year. In 1989 the National Book Foundation, a nonprofit organization which now oversees and manages the National Book...
and the Carey-Thomas Award for non-fiction. Moreover, in 1962, the Reader's Digest
Reader's Digest
Reader's Digest is a general interest family magazine, published ten times annually. Formerly based in Chappaqua, New York, its headquarters is now in New York City. It was founded in 1922, by DeWitt Wallace and Lila Bell Wallace...
magazine serialization reached some 12 million additional readers. In the New York Times Book Review, Hugh Trevor-Roper praised it as “a splendid work of scholarship, objective in method, sound in judgment, inescapable in its conclusions.”

Whereas nearly all American journalists praised the book, academics were split. Some of these acknowledged Shirer's achievement, but most condemned it. The harshest criticism tended to come from those who disagreed with the Sonderweg or "Luther to Hitler" thesis mentioned above.

Klaus Epstein listed "four major failings": a crude understanding of German history; a lack of balance, leaving important gaps; no understanding of a modern totalitarian regime; and ignorance of current scholarship of the Nazi period.

Historian Richard J. Evans
Richard J. Evans
Richard John Evans is a British academic and historian, prominently known for his history of Germany.-Life:Evans was born in London, of Welsh parentage, and is now Regius Professor of Modern History at the University of Cambridge and President of Wolfson College...
, author of The Third Reich Trilogy
The Third Reich Trilogy
The Third Reich Trilogy is a series of three narrative history books by the British historian Richard J. Evans covering the rise and collapse of Nazi Germany in detail, with a focus on the internal politics and the decision-making process...
(2003–8), concedes that Rise and Fall is a "readable general history of Nazi Germany" and that "there are good reasons for [its] success." His issue with Shirer is that he worked outside of the academic mainstream, and that his account was not informed by the historical scholarship of the time (1960).

In West Germany, the "Luther to Hitler" interpretation was almost universally rejected in favor of the view that Nazism was an instance of totalitarianism, which arises in various countries. One commentator asserted that Rise and Fall had been unanimously condemned, and considered dangerous to relations between America and West Germany, as it could inflame anti-German sentiments in the United States.

The book has been reprinted many times (but not updated) since it was published in 1960. Current in-print editions are:


There also exists an audiobook version.