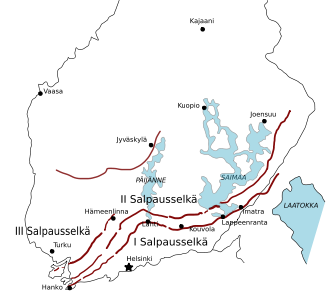 A terminal moraine, also called end moraine, is a moraine
Moraine
A moraine is any glacially formed accumulation of unconsolidated glacial debris which can occur in currently glaciated and formerly glaciated regions, such as those areas acted upon by a past glacial maximum. This debris may have been plucked off a valley floor as a glacier advanced or it may have...
that forms at the end of the glacier
Glacier
A glacier is a large persistent body of ice that forms where the accumulation of snow exceeds its ablation over many years, often centuries. At least 0.1 km² in area and 50 m thick, but often much larger, a glacier slowly deforms and flows due to stresses induced by its weight...
called the snout
Glacier terminus
A glacier terminus, or snout, is the end of a glacier at any given point in time. Although glaciers seem motionless to the observer, in reality glaciers are in endless motion and the glacier terminus is always either advancing or retreating...
.

Terminal moraines are one of the most prominent types of moraines in the Arctic
Arctic
The Arctic is a region located at the northern-most part of the Earth. The Arctic consists of the Arctic Ocean and parts of Canada, Russia, Greenland, the United States, Norway, Sweden, Finland, and Iceland. The Arctic region consists of a vast, ice-covered ocean, surrounded by treeless permafrost...
. One famous terminal moraine is the Giant's Wall in Norway
Norway
Norway , officially the Kingdom of Norway, is a Nordic unitary constitutional monarchy whose territory comprises the western portion of the Scandinavian Peninsula, Jan Mayen, and the Arctic archipelago of Svalbard and Bouvet Island. Norway has a total area of and a population of about 4.9 million...
which, according to legend, was built by giants to keep intruders out of their realm. It is now known that terminal moraines are created at the edge of the greatest extent of the glacier. At this point, the debris that has been accumulated by plucking and abrasion, that has been pushed by the front edge of the ice is driven no farther, but instead is dumped in a heap. Because the glacier acts very much like a conveyor belt
Conveyor belt
A conveyor belt consists of two or more pulleys, with a continuous loop of material - the conveyor belt - that rotates about them. One or both of the pulleys are powered, moving the belt and the material on the belt forward. The powered pulley is called the drive pulley while the unpowered pulley...
, the longer it stays in one place, the greater the amount of material that will be deposited. The moraine is left as the marking point of the terminal extent of the ice.

In North America, the Outer Lands
Outer Lands
The Outer Lands is a term denoting the prominent terminal moraine archipelagic region off the southern coast of New England in the United States...
is a name given to the terminal moraine archipelago
Archipelago
An archipelago , sometimes called an island group, is a chain or cluster of islands. The word archipelago is derived from the Greek ἄρχι- – arkhi- and πέλαγος – pélagos through the Italian arcipelago...
of the northeast
Atlantic Northeast
The Atlantic Northeast, or Arcadia, is a region of North America, comprising New Hampshire, Vermont, Maine and the Canadian Maritimes. Definitions of the region vary; it may extend to upstate New York and/or all of Atlantic Canada....
United States
United States
The United States of America is a federal constitutional republic comprising fifty states and a federal district...
(Cape Cod
Cape Cod
Cape Cod, often referred to locally as simply the Cape, is a cape in the easternmost portion of the state of Massachusetts, in the Northeastern United States...
, Martha's Vineyard
Martha's Vineyard
Martha's Vineyard is an island located south of Cape Cod in Massachusetts, known for being an affluent summer colony....
, Nantucket, Block Island
Block Island
Block Island is part of the U.S. state of Rhode Island and is located in the Atlantic Ocean approximately south of the coast of Rhode Island, east of Montauk Point on Long Island, and is separated from the Rhode Island mainland by Block Island Sound. The United States Census Bureau defines Block...
and Long Island
Long Island
Long Island is an island located in the southeast part of the U.S. state of New York, just east of Manhattan. Stretching northeast into the Atlantic Ocean, Long Island contains four counties, two of which are boroughs of New York City , and two of which are mainly suburban...
). Other prominent examples of terminal moraines are the Tinley Moraine
Tinley Moraine
The Tinley Moraine is a moraine around the Lake Michigan basin in North America. It was formed during the Wisconsin Glaciation and is younger than the higher and wider terminal moraine called the Valparaiso Moraine farther from the lake than it. Compared to the Valparaiso Moraine, the Tinley...
and the Valparaiso Moraine
Valparaiso Moraine
The Valparaiso Moraine is a terminal moraine around the Lake Michigan basin in North America. It is a band of high, hilly terrain made up of glacial till and sand that reaches an elevation of near 300 feet above the level of Lake Michigan at its maximum height in Indiana and 17 miles wide at its...
, perhaps the best examples of terminal moraines in North America. These moraines are most clearly seen southwest of Chicago.

In Europe
Europe
Europe is, by convention, one of the world's seven continents. Comprising the westernmost peninsula of Eurasia, Europe is generally 'divided' from Asia to its east by the watershed divides of the Ural and Caucasus Mountains, the Ural River, the Caspian and Black Seas, and the waterways connecting...
, virtually all the terrain in the central Netherlands
Netherlands
The Netherlands is a constituent country of the Kingdom of the Netherlands, located mainly in North-West Europe and with several islands in the Caribbean. Mainland Netherlands borders the North Sea to the north and west, Belgium to the south, and Germany to the east, and shares maritime borders...
is made up of an extended terminal moraine. In Switzerland
Switzerland
Switzerland name of one of the Swiss cantons. ; ; ; or ), in its full name the Swiss Confederation , is a federal republic consisting of 26 cantons, with Bern as the seat of the federal authorities. The country is situated in Western Europe,Or Central Europe depending on the definition....
, alpine terminal moraines can be found, one striking example being the moraine at the end of the valley of the glacier Forno in the south-eastern canton of Graubünden
Graubünden
Graubünden or Grisons is the largest and easternmost canton of Switzerland. The canton shares borders with the cantons of Ticino, Uri, Glarus and St. Gallen and international borders with Italy, Austria and Liechtenstein...
near St. Moritz
St. Moritz
St. Moritz is a resort town in the Engadine valley in Switzerland. It is a municipality in the district of Maloja in the Swiss canton of Graubünden...
and the Italian border.