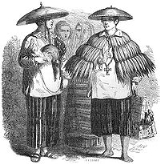 Encyclopedia
The Tagalog people are an ethnic group
Ethnic groups in the Philippines
The Philippine islands are inhabited by number of different ethnic groups. The majority of the population is composed of ethnolinguistic groups whose languages are Austronesian in origin. Many of these groups converted to Christianity, and adopted many foreign elements of culture...
in the Philippines. The name Tagalog comes from either the native term tagá-ilog, meaning 'people living along the river
River
A river is a natural watercourse, usually freshwater, flowing towards an ocean, a lake, a sea, or another river. In a few cases, a river simply flows into the ground or dries up completely before reaching another body of water. Small rivers may also be called by several other names, including...
', or another native term, tagá-alog, meaning 'people living along the ford
Ford (crossing)
A ford is a shallow place with good footing where a river or stream may be crossed by wading or in a vehicle. A ford is mostly a natural phenomenon, in contrast to a low water crossing, which is an artificial bridge that allows crossing a river or stream when water is low.The names of many towns...
', a ford being a shallow part of a river or stream where people, animals, or vehicles can cross it. The prefix taga- means "coming from" or "native of", while the word ilog means 'river'. Translated, tagá-ilog means 'coming from the river' or 'native of the river', and tagá-alog means 'coming from the ford' or 'native of the ford' with 'the' being implied in both cases. Either way, the original name has been contracted to become simply Tagalog. In more recent times, the people of this ethnolinguistic group rarely refer to themselves as "Tagalog", and instead, refer to themselves simply as "Filipino
Filipino people
The Filipino people or Filipinos are an Austronesian ethnic group native to the islands of the Philippines. There are about 92 million Filipinos in the Philippines, and about 11 million living outside the Philippines ....
". 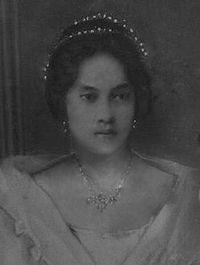 Tagalog people number about 28.1% of the Total Filipino population making them the second largest major indigenous Filipino ethnic group
Ethnic groups in the Philippines
The Philippine islands are inhabited by number of different ethnic groups. The majority of the population is composed of ethnolinguistic groups whose languages are Austronesian in origin. Many of these groups converted to Christianity, and adopted many foreign elements of culture...
, second to Visayans. Tagalogs speak the Tagalog language
Tagalog language
Tagalog is an Austronesian language spoken as a first language by a third of the population of the Philippines and as a second language by most of the rest. It is the first language of the Philippine region IV and of Metro Manila...
, with many dialectal variations, although all Tagalog dialects are considered to be mutually comprehensible to each other. The main religion of Tagalogs is Christianity, mainly Roman Catholicism and some Protestantism
Protestantism
Protestantism is one of the three major groupings within Christianity. It is a movement that began in Germany in the early 16th century as a reaction against medieval Roman Catholic doctrines and practices, especially in regards to salvation, justification, and ecclesiology.The doctrines of the...
, or other religions.

Tagalogs have ancestries in other ethnic groups such as East Asian and as well as some other South East Asian people that migrated/settled to Manila and CALABARZON
CALABARZON
CALABARZON is one of the regions of the Philippines. It is also designated as Region IV-A and its regional center is Calamba City in Laguna...
that assimilated to Tagalog or came even long before the Spanish Conquest. That could have established several native Tagalog communities formed by the assimilation of various indigenous Philippine kingdoms. 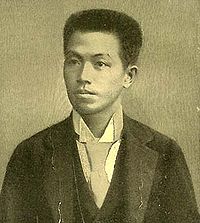 The Tagalog culture of the Pre-Hispanic times was totally different from its forms today although they were the most westernized out of all the Filipino ethnic groups. Tagalog culture grew steadily to accept foreign, especially Spanish, British, and American cultural influences. Traditionally, the Tagalogs are agriculturists, although there are a few who engage in fishing. Tagalogs have a very strict adherence to conduct politeness and respect, and this is exemplified by practices and their language structure. Tagalogs are also depicted by examples of bravery and courage, as manifested by historical events, e.g., the Philippine Revolution
Philippine Revolution
The Philippine Revolution , called the "Tagalog War" by the Spanish, was an armed military conflict between the people of the Philippines and the Spanish colonial authorities which resulted in the secession of the Philippine Islands from the Spanish Empire.The Philippine Revolution began in August...
and World War II
World War II
World War II, or the Second World War , was a global conflict lasting from 1939 to 1945, involving most of the world's nations—including all of the great powers—eventually forming two opposing military alliances: the Allies and the Axis...
.

Tagalogs are also focused on food preparation and culinary activities. Women (and sometimes, men) are trained early on to become culinary experts. This is depicted in lavish celebrations during Fiestas and gatherings.

The present "center" of the Tagalog culture and people is Taal
Taal, Batangas
Taal is a 4th class municipality in the province of Batangas, Philippines. According to the latest census, it has a population of 51,459 people in 8,451 households.It is the Balisong and Barong Tagalog Capital of the Philippines...
, Batangas
Batangas
Batangas is a first class province of the Philippines located on the southwestern part of Luzon in the CALABARZON region. Its capital is Batangas City and it is bordered by the provinces of Cavite and Laguna to the north and Quezon to the east. Across the Verde Island Passages to the south is the...
, being its birthplace, and is still the "Heartland of the Tagalog Culture". Most of the culture of the Tagalog people is passed on by oral tradition, despite the existence of a writing system. This is because even if they were literate and had a written tradition before the Spaniards arrived, they wrote their ideas on perishable leaves and branches. 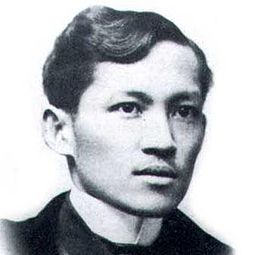 The Tagalogs were the first settlers of Manila. In the late 16th century, Spain chose Manila as the capital of its Philippine colony. From then onwards, it has been the political and economic center of the Philippines. Manila and the surrounding Tagalog areas played a leading role in the Philippine Revolution and the People Power Revolution. Throughout the centuries, there have been massive migrations by other ethnic groups to Manila, and many of them have intermarried with the Tagalog people.

A number of Philippine national heroes are of Tagalog heritage. The Tagalogs staged numerous revolts against Spanish colonization, and were also among the earliest. One such revolt was that of Apolinario de la Cruz (Hermano Pule), which was religious in orientation. National hero José Rizal
José Rizal
José Protacio Rizal Mercado y Alonso Realonda , was a Filipino polymath, patriot and the most prominent advocate for reform in the Philippines during the Spanish colonial era. He is regarded as the foremost Filipino patriot and is listed as one of the national heroes of the Philippines by...
, who hailed from Calamba, Laguna, was a Tagalog of mixed Hokkien Chinese and Japanese descent.

Since Aguinaldo
Emilio Aguinaldo
Emilio Aguinaldo y Famy was a Filipino general, politician, and independence leader. He played an instrumental role during the Philippines' revolution against Spain, and the subsequent Philippine-American War or War of Philippine Independence that resisted American occupation...
, other Tagalogs have assumed the presidency: Manuel L. Quezon
Manuel L. Quezon
Manuel Luis Quezón y Molina served as president of the Commonwealth of the Philippines from 1935 to 1944. He was the first Filipino to head a government of the Philippines...
(who was a Filipino mestizo
Filipino mestizo
Filipino mestizo is a term used in the Philippines to describe people of mixed Filipino and foreign ancestry. The word mestizo is of Spanish origin, and was originally used in the Americas to only describe people of mixed European and Native American ancestry.- History :Spanish periodThe Spanish...
of Tagalog descent), José P. Laurel
Jose P. Laurel
José Paciano Laurel y García was the president of the Republic of the Philippines, a Japanese-sponsored administration during World War II, from 1943 to 1945...
, and Joseph Ejercito Estrada
Joseph Estrada
Joseph "Erap" Ejercito Estrada was the 13th President of the Philippines, serving from 1998 until 2001. Estrada was the first person in the Post-EDSA era to be elected both to the presidency and vice-presidency.Estrada gained popularity as a film actor, playing the lead role in over 100 films in...
. Early Philippine history has always been actively participated by the struggles and triumphs of the Tagalog people and the Tagalogs came to take an active part in the present Philippine economy and politics.
The source of this article is wikipedia, the free encyclopedia.  The text of this article is licensed under the GFDL.