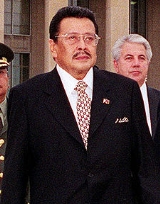 Estrada gained popularity as a film actor, playing the lead role in over 100 films in an acting career spanning 33 years.

What are the different allegations acused to Pres. Ejercito and what are the reasons that can proved it?
More
x