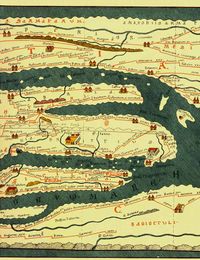 The Tabula Peutingeriana (Peutinger table, Peutinger Map) is an itinerarium
Itinerarium
An itinerarium was an Ancient Roman road map in the form of a listing of cities, villages and other stops, with the intervening distances. One surviving example is the Peutinger Table; another is the Antonine Itinerary....
showing the cursus publicus
Cursus publicus
The cursus publicus was the state-run courier and transportation service of the Roman Empire, later inherited by the Byzantine Empire. It was created by Emperor Augustus to transport messages, officials, and tax revenues from one province to another...
, the road network in the Roman Empire
Roman Empire
The Roman Empire was the post-Republican period of the ancient Roman civilization, characterised by an autocratic form of government and large territorial holdings in Europe and around the Mediterranean....
. The original map of which this is a unique copy was last revised in the fourth or early fifth century. It covers Europe
Europe
Europe is, by convention, one of the world's seven continents. Comprising the westernmost peninsula of Eurasia, Europe is generally 'divided' from Asia to its east by the watershed divides of the Ural and Caucasus Mountains, the Ural River, the Caspian and Black Seas, and the waterways connecting...
, parts of Asia
Asia
Asia is the world's largest and most populous continent, located primarily in the eastern and northern hemispheres. It covers 8.7% of the Earth's total surface area and with approximately 3.879 billion people, it hosts 60% of the world's current human population...
(Persia, India
India
India , officially the Republic of India , is a country in South Asia. It is the seventh-largest country by geographical area, the second-most populous country with over 1.2 billion people, and the most populous democracy in the world...
) and North Africa
North Africa
North Africa or Northern Africa is the northernmost region of the African continent, linked by the Sahara to Sub-Saharan Africa. Geopolitically, the United Nations definition of Northern Africa includes eight countries or territories; Algeria, Egypt, Libya, Morocco, South Sudan, Sudan, Tunisia, and...
. The map is named after Konrad Peutinger
Konrad Peutinger
Conrad Peutinger was a German humanist diplomat, politician, and economist, who was educated at Bologna and Padua. Known as a notorious antiquarian, he collected, with the help of Marcus Welser and his wife Margareta Welser, one of the largest private libraries north of the...
, a German 15–16th-century humanist and antiquarian.

The map was discovered in a library in Worms
Worms, Germany
Worms is a city in Rhineland-Palatinate, Germany, on the Rhine River. At the end of 2004, it had 85,829 inhabitants.Established by the Celts, who called it Borbetomagus, Worms today remains embattled with the cities Trier and Cologne over the title of "Oldest City in Germany." Worms is the only...
by Conrad Celtes
Conrad Celtes
Conrad Celtes , also Konrad Celtis and Latin Conradus Celtis , was a German Renaissance humanist scholar and Neo-Latin poet.-Life:...
, who was unable to publish his find before his death and bequeathed the map in 1508 to Peutinger. It is conserved at the Österreichische Nationalbibliothek, Hofburg, Vienna.

The Tabula Peutingeriana is the only known surviving map of the Roman cursus publicus
Cursus publicus
The cursus publicus was the state-run courier and transportation service of the Roman Empire, later inherited by the Byzantine Empire. It was created by Emperor Augustus to transport messages, officials, and tax revenues from one province to another...
; it was made by a monk in Colmar
Colmar
Colmar is a commune in the Haut-Rhin department in Alsace in north-eastern France.It is the capital of the department. Colmar is also the seat of the highest jurisdiction in Alsace, the appellate court....
in the thirteenth century. It is a parchment scroll
Scroll (parchment)
A scroll is a roll of papyrus, parchment, or paper which has been written, drawn or painted upon for the purpose of transmitting information or using as a decoration.-Structure:...
, 0.34 m high and 6.75 m long, assembled from eleven sections, a medieval reproduction of the original scroll. It is a very schematic map: the land masses are distorted, especially in the east-west direction. The map shows many Roman settlements, the roads connecting them, rivers, mountains, forests and seas. The distances between the settlements are also given. The three most important cities of the Roman Empire, Rome
Rome
Rome is the capital of Italy and the country's largest and most populated city and comune, with over 2.7 million residents in . The city is located in the central-western portion of the Italian Peninsula, on the Tiber River within the Lazio region of Italy.Rome's history spans two and a half...
, Constantinople
Constantinople
Constantinople was the capital of the Roman, Eastern Roman, Byzantine, Latin, and Ottoman Empires. Throughout most of the Middle Ages, Constantinople was Europe's largest and wealthiest city.-Names:...
and Antioch
Antioch
Antioch on the Orontes was an ancient city on the eastern side of the Orontes River. It is near the modern city of Antakya, Turkey.Founded near the end of the 4th century BC by Seleucus I Nicator, one of Alexander the Great's generals, Antioch eventually rivaled Alexandria as the chief city of the...
, are represented with special iconic decoration. Besides the totality of the Empire, the map shows the Near East, India and the Ganges, Sri Lanka (Insula Taprobane), and even an indication of China. It shows a "Temple to Augustus
Augustus
Augustus ;23 September 63 BC – 19 August AD 14) is considered the first emperor of the Roman Empire, which he ruled alone from 27 BC until his death in 14 AD.The dates of his rule are contemporary dates; Augustus lived under two calendars, the Roman Republican until 45 BC, and the Julian...
" at Muziris
Muziris
Muziris is an ancient sea-port in Southwestern India on the Periyar River 3.2 km from its mouth. The derivation of the name Muziris is said to be from "Mucciripattanam," "mucciri" means "cleft palate" and "pattanam" means "city". Near Muziris, Periyar River was branched into two like a...
, one of the main ports for trade to the Roman Empire on the southwest coast of India. In the West, the absence of the Iberian Peninsula
Iberian Peninsula
The Iberian Peninsula , sometimes called Iberia, is located in the extreme southwest of Europe and includes the modern-day sovereign states of Spain, Portugal and Andorra, as well as the British Overseas Territory of Gibraltar...
indicates that a twelfth original section has been lost in the surviving copy; it was reconstructed in 1898 by Konrad Miller.

The table appears to be based on "itineraries", or lists of destinations along Roman roads, as the distances between points along the routes are indicated. Travelers would not have possessed anything so sophisticated as a map, but they needed to know what lay ahead of them on the road and how far. The Peutinger table represents these roads as a series of roughly parallel lines along which destinations have been marked in order of travel. The shape of the parchment pages accounts for the conventional rectangular layout. However, a rough similarity to the coordinates of Ptolemy
Ptolemy
Claudius Ptolemy , was a Roman citizen of Egypt who wrote in Greek. He was a mathematician, astronomer, geographer, astrologer, and poet of a single epigram in the Greek Anthology. He lived in Egypt under Roman rule, and is believed to have been born in the town of Ptolemais Hermiou in the...
's earth-mapping gives some writers a hope that some terrestrial representation was intended by the unknown compilers.

The stages and cities are represented by hundreds of functional place symbols, used with discrimination from the simplest icon of a building with two towers to the elaborate individualized "portraits" of the three great cities. Annalina and Mario Levi, the Tabula's editors, conclude that the semi-schematic semi-pictorial symbols reproduce Roman cartographic conventions of the itineraria picta described by Vegetius
Vegetius
Publius Flavius Vegetius Renatus, commonly referred to simply as Vegetius, was a writer of the Later Roman Empire. Nothing is known of his life or station beyond what he tells us in his two surviving works: Epitoma rei militaris , and the lesser-known Digesta Artis Mulomedicinae, a guide to...
, of which this is the sole testimony.

The fourth-century tabula was the distant descendant of the one prepared under the direction of Marcus Vipsanius Agrippa
Marcus Vipsanius Agrippa
Marcus Vipsanius Agrippa was a Roman statesman and general. He was a close friend, son-in-law, lieutenant and defense minister to Octavian, the future Emperor Caesar Augustus...
, a friend of Augustus. After Agrippa's death, the map was engraved on marble and placed in the Porticus Vipsaniae, not far from the Ara Pacis
Ara Pacis
The Ara Pacis Augustae is an altar to Peace, envisioned as a Roman goddess...
. That early imperial dating for the archetype of the map is also supported by Glen Bowersock, based on numerous details of the Roman Arabia province that look entirely anachronistic for a 4th-century map. Therefore, he also points to the map of Vipsanius Agrippa.

The map was copied for Ortelius and published shortly after his death in 1598. A partial first edition was printed at Antwerp in 1591 (Fragmenta tabulæ antiquæ) by Johannes Moretus
Jan Moretus
Jan Moretus, also Johann Moerentorf or Joannes Moretus, was a Flemish printer. Moretus married the second daughter of the famous Antwerp publisher Christoffel Plantijn in 1570. He had been working for Plantijn since 1557, and after his death, Jan Moretus would became the owner of his printing...
. Moretus would print the full Tabula in December 1598, also at Antwerp.

The Peutinger family kept the map until 1714, when it was sold. It bounced between royal and elite families until it was purchased by Prince Eugene of Savoy for 100 ducats; upon his death in 1737, it was purchased for the Habsburg
Habsburg
The House of Habsburg , also found as Hapsburg, and also known as House of Austria is one of the most important royal houses of Europe and is best known for being an origin of all of the formally elected Holy Roman Emperors between 1438 and 1740, as well as rulers of the Austrian Empire and...
Imperial Court Library (Hofbibliothek) in Vienna, where it remains.
In 2007, the map was placed on the UNESCO Memory of the World Register
Memory of the World Programme
UNESCO's Memory of the World Programme is an international initiative launched to safeguard the documentary heritage of humanity against collective amnesia, neglect, the ravages of time and climatic conditions, and willful and deliberate destruction...
, and in recognition of this, it was displayed to the public for a single day on November 26, 2007. Because of its fragile condition, it is not ordinarily on display.