The Sverdlov class cruisers, Soviet designation Project 68bis, were the last conventional cruisers built for the Soviet Navy
Soviet Navy
The Soviet Navy was the naval arm of the Soviet Armed Forces. Often referred to as the Red Fleet, the Soviet Navy would have played an instrumental role in a Warsaw Pact war with NATO, where it would have attempted to prevent naval convoys from bringing reinforcements across the Atlantic Ocean...
; 13 ships were completed before Nikita Khrushchev
Nikita Khrushchev
Nikita Sergeyevich Khrushchev led the Soviet Union during part of the Cold War. He served as First Secretary of the Communist Party of the Soviet Union from 1953 to 1964, and as Chairman of the Council of Ministers, or Premier, from 1958 to 1964...
called a halt to the programme as these ships were considered obsolescent with the advent of the guided missile. A total of 30 ships were planned.

These ships were improved and slightly enlarged versions of the Chapayev class cruiser
Chapayev class cruiser
The Chapayev class were a group of cruisers built for the Soviet Navy during and after World War II. Seventeen ships were planned but only seven were actually started before the German invasion...
s. They had the same main armament, machinery and side protection as the earlier ships, but had increased fuel capacity for greater range, an all welded hull, improved underwater protection, increased anti aircraft artillery and radar.

The ultimate radar suite was:


The Admiral Nakhimov had an SS-N-1 anti-ship missile launcher installed in place of A and B turrets as a trial in 1957. This installation was not successful, the ship was rapidly decommissioned and was used as a target ship in 1961.

The Dzerzhinsky had a SAM launcher for the SA-2 missile, replacing the aft turrets in 1960-62. This conversion was also not successful and no further ships were converted.

The Senyavin and Zhdanov were converted into command ships in 1971 by replacing the aft turrets with extra accommodation and electronics. The two command ships were fitted with a helicopter deck and hangar together with a SA-N-4 SAM missile system and 4 twin 30mm guns.

built by Baltic Yard, Leningrad -
laid down 1949, launched 5 July 1950, completed 15 May 1952,
Scrapped 1989
built in Nikolayev
Mykolaiv
Mykolaiv , also known as Nikolayev , is a city in southern Ukraine, administrative center of the Mykolaiv Oblast. Mykolaiv is the main ship building center of the Black Sea, and, arguably, the whole Eastern Europe.-Name of city:...
,
laid down 1948, launched 31 August 1950, completed 18 August 1952,
Scrapped 1989
built by Admiralty Yard Leningrad,
laid down 1949, launched 17 September 1950, completed 30 June 1952;
sold to the Indonesian Navy
Indonesian Navy
The role of the Indonesian Navy is to patrol of Indonesia's immense coastline, to ensure safeguard the territorial waters and Exclusive Economic Zone , to protect Indonesia's maritime strategic interests, to protect the islands surrounded Indonesia and to defend against seaborne threats. The TNI...
in 1962, recommissioned as KRI Irian in 1963; sold for scrap to Taiwan in 1972. British frogman Lionel Crabb
Lionel Crabb
Lionel "Buster" Crabb OBE, GM was a British Royal Navy frogman and MI6 diver who vanished during a reconnaissance mission around a Soviet cruiser in 1956.-Early life:...
disappeared in 1956 when secretly inspecting this ship for MI6 when it was docked in Portsmouth Harbour
Portsmouth Harbour
Portsmouth Harbour is a large natural harbour in Hampshire, England. Geographically it is a ria: formerly it was the valley of a stream flowing from Portsdown into the Solent River. The city of Portsmouth lies to the east on Portsea Island, and Gosport to the west on the mainland...
.
built by Baltic yard, Leningrad -
laid down 1950, launched 27 December 1950, completed 31 December 1951,
Converted into a command ship with X turret removed and replaced by office space and extra electronics added, Scrapped 1991 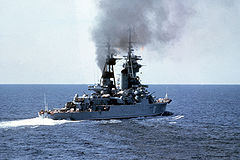 
Decommissioned late 1980s. She ran aground in December 1994 at Hasvik, Norway on her way to India for scrapping

built in Nikolayev,
laid down 1951, launched 29 November 1952, Completed 1954,
Museum ship
Museum ship
A museum ship, or sometimes memorial ship, is a ship that has been preserved and converted into a museum open to the public, for educational or memorial purposes...
at Novorossiysk