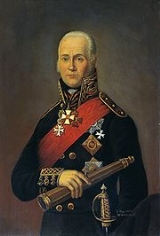 Overview
Fyodor Fyodorovich Ushakov (February 24, 1744–October 14, 1817) was the most illustrious Russia
Russia
Russia or , officially known as both Russia and the Russian Federation , is a country in northern Eurasia. It is a federal semi-presidential republic, comprising 83 federal subjects...
n naval commander and admiral of the 18th century.
He was born in the village of Burnakovo in the Yaroslavl gubernia
Yaroslavl Oblast
Yaroslavl Oblast is a federal subject of Russia , which is located in the Central Federal District, surrounded by Tver, Moscow, Ivanovo, Vladimir, Kostroma, and Vologda Oblasts. This geographic location affords the oblast the advantages of proximity to Moscow and St. Petersburg...
, to a modest family of the minor nobility. On February 15, 1761, he signed up for the Russian Navy in Saint Petersburg
Saint Petersburg
Saint Petersburg is a city and a federal subject of Russia located on the Neva River at the head of the Gulf of Finland on the Baltic Sea...
. After training
Cadet
A cadet is a trainee to become an officer in the military, often a person who is a junior trainee. The term comes from the term "cadet" for younger sons of a noble family.- Military context :...
, he served on a galley in the Baltic Fleet
Baltic Fleet
The Twice Red Banner Baltic Fleet - is the Russian Navy's presence in the Baltic Sea. In previous historical periods, it has been part of the navy of Imperial Russia and later the Soviet Union. The Fleet gained the 'Twice Red Banner' appellation during the Soviet period, indicating two awards of...
.

F.F. Ushakov was not married and he had not sons or daughters. Id there someone who knows if he had some brother or sister and who knows who descend...
More
x