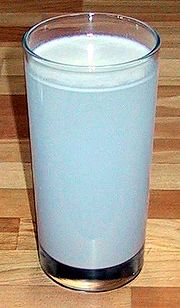 In chemistry
Chemistry
Chemistry is the science of matter, especially its chemical reactions, but also its composition, structure and properties. Chemistry is concerned with atoms and their interactions with other atoms, and particularly with the properties of chemical bonds....
, a suspension is a heterogeneous fluid containing solid particles that are sufficiently large for sedimentation
Sedimentation
Sedimentation is the tendency for particles in suspension to settle out of the fluid in which they are entrained, and come to rest against a barrier. This is due to their motion through the fluid in response to the forces acting on them: these forces can be due to gravity, centrifugal acceleration...
. Usually they must be larger than 1 micrometer. The internal phase (solid) is dispersed throughout the external phase (fluid) through mechanical agitation, with the use of certain excipients or suspending agents. Unlike colloids, suspensions will eventually settle. An example of a suspension would be sand in water. The suspended particles are visible under a microscope and will settle over time if left undisturbed. This distinguishes a suspension from a colloid
Colloid
A colloid is a substance microscopically dispersed evenly throughout another substance.A colloidal system consists of two separate phases: a dispersed phase and a continuous phase . A colloidal system may be solid, liquid, or gaseous.Many familiar substances are colloids, as shown in the chart below...
, in which the suspended particles are smaller and do not settle. Colloids and suspensions are different from solutions, in which the dissolved substance (solute) does not exist as a solid, and solvent and solute are homogeneously mixed.

A suspension of liquid droplets or fine solid particles in a gas is called an aerosol
Aerosol
Technically, an aerosol is a suspension of fine solid particles or liquid droplets in a gas. Examples are clouds, and air pollution such as smog and smoke. In general conversation, aerosol usually refers to an aerosol spray can or the output of such a can...
or particulate. In the atmosphere
Earth's atmosphere
The atmosphere of Earth is a layer of gases surrounding the planet Earth that is retained by Earth's gravity. The atmosphere protects life on Earth by absorbing ultraviolet solar radiation, warming the surface through heat retention , and reducing temperature extremes between day and night...
these consist of fine dust and soot
Soot
Soot is a general term that refers to impure carbon particles resulting from the incomplete combustion of a hydrocarbon. It is more properly restricted to the product of the gas-phase combustion process but is commonly extended to include the residual pyrolyzed fuel particles such as cenospheres,...
particles, sea salt
Sea salt
Sea salt, salt obtained by the evaporation of seawater, is used in cooking and cosmetics. It is historically called bay salt or solar salt...
, biogenic and volcano
Volcano
2. Bedrock3. Conduit 4. Base5. Sill6. Dike7. Layers of ash emitted by the volcano8. Flank| 9. Layers of lava emitted by the volcano10. Throat11. Parasitic cone12. Lava flow13. Vent14. Crater15...
genic sulfate
Sulfate
In inorganic chemistry, a sulfate is a salt of sulfuric acid.-Chemical properties:...
s, nitrate
Nitrate
The nitrate ion is a polyatomic ion with the molecular formula NO and a molecular mass of 62.0049 g/mol. It is the conjugate base of nitric acid, consisting of one central nitrogen atom surrounded by three identically-bonded oxygen atoms in a trigonal planar arrangement. The nitrate ion carries a...
s, and cloud
Cloud
A cloud is a visible mass of liquid droplets or frozen crystals made of water and/or various chemicals suspended in the atmosphere above the surface of a planetary body. They are also known as aerosols. Clouds in Earth's atmosphere are studied in the cloud physics branch of meteorology...
droplets.

Suspensions are classified on the basis of the dispersed phase and the dispersion medium, where the former is essentially solid while the latter may either be a solid, a liquid, or a gas.

In modern chemical process industries, high shear mixing technology
High Shear Mixer
A high-shear mixer disperses, or transports, one phase or ingredient into a main continuous phase , with which it would normally be immiscible...
has been used to create many novel suspensions.

Suspensions are unstable from the thermodynamic point of view; however, they can be kinetically stable over a large period of time, which determines their shelf life. This time span needs to be measured to ensure the best product quality to the final consumer.
“Dispersion stability refers to the ability of a dispersion to resist change in its properties over time.” D.J. McClements.


Destabilisation phenomena of a dispersion

These destabilisations can be classified into two major processes:

1-Migration phenomena : whereby the difference in density between the continuous and dispersed phase, leads to gravitational phase separation. In the case of suspensions sedimentation
Sedimentation
Sedimentation is the tendency for particles in suspension to settle out of the fluid in which they are entrained, and come to rest against a barrier. This is due to their motion through the fluid in response to the forces acting on them: these forces can be due to gravity, centrifugal acceleration...
occurs as the dispersed phase is denser than the continuous phase.
2-Particle size increase phenomena: whereby the suspended particles join together and increase in size. Below are the two types of this phenomena.

Multiple light scattering coupled with vertical scanning is the most widely used technique to monitor the dispersion state of a product, hence identifying and quantifying destabilisation phenomena. It works on concentrated dispersions without dilution. When light is sent through the sample, it is backscattered by the particles. The backscattering intensity is directly proportional to the size and volume fraction of the dispersed phase. Therefore, local changes in concentration (sedimentation
Sedimentation
Sedimentation is the tendency for particles in suspension to settle out of the fluid in which they are entrained, and come to rest against a barrier. This is due to their motion through the fluid in response to the forces acting on them: these forces can be due to gravity, centrifugal acceleration...
) and global changes in size (flocculation
Flocculation
Flocculation, in the field of chemistry, is a process wherein colloids come out of suspension in the form of floc or flakes by the addition of a clarifying agent. The action differs from precipitation in that, prior to flocculation, colloids are merely suspended in a liquid and not actually...
, aggregation
Particle aggregation
Particle aggregation in materials science is direct mutual attraction between particles via van der Waals forces or chemical bonding....
) are detected and monitored.

The kinetic process of destabilisation can be rather long (up to several months or even years for some products) and it is often required for the formulator to use further accelerating methods in order to reach reasonable development time for new product design. Thermal methods are the most commonly used and consists in increasing temperature to accelerate destabilisation (below critical temperatures of phase inversion or chemical degradation). Temperature affects not only the viscosity, but also interfacial tension in the case of non-ionic surfactants or more generally interactions forces inside the system. Storing a dispersion at high temperatures enables to simulate real life conditions for a product (e.g. tube of sunscreen cream in a car in the summer), but also to accelerate destabilisation processes up to 200 times.

Mechanical acceleration including vibration, centrifugation
Centrifugation
Centrifugation is a process that involves the use of the centrifugal force for the sedimentation of mixtures with a centrifuge, used in industry and in laboratory settings. More-dense components of the mixture migrate away from the axis of the centrifuge, while less-dense components of the mixture...
and agitation are sometimes used. They subject the product to different forces that pushes the particles / droplets against one another, hence helping in the film drainage. However, some emulsions would never coalesce in normal gravity, while they do under artificial gravity. Moreover, segregation of different populations of particles have been highlighted when using centrifugation and vibration.


www.chemistrylecturenotes.com
Michelle atkeisson
Fairfield high school teacher
I.p.c(integrated physics and chemistry)10-sophmore class
Physics-11-12
The source of this article is wikipedia, the free encyclopedia.  The text of this article is licensed under the GFDL.