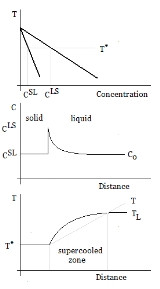 Encyclopedia
Supercooling, also known as undercooling, is the process of lowering the temperature of a liquid
Liquid
Liquid is one of the three classical states of matter . Like a gas, a liquid is able to flow and take the shape of a container. Some liquids resist compression, while others can be compressed. Unlike a gas, a liquid does not disperse to fill every space of a container, and maintains a fairly...
or a gas
Gas
Gas is one of the three classical states of matter . Near absolute zero, a substance exists as a solid. As heat is added to this substance it melts into a liquid at its melting point , boils into a gas at its boiling point, and if heated high enough would enter a plasma state in which the electrons...
below its freezing point
Melting point
The melting point of a solid is the temperature at which it changes state from solid to liquid. At the melting point the solid and liquid phase exist in equilibrium. The melting point of a substance depends on pressure and is usually specified at standard atmospheric pressure...
without it becoming a solid
Solid
Solid is one of the three classical states of matter . It is characterized by structural rigidity and resistance to changes of shape or volume. Unlike a liquid, a solid object does not flow to take on the shape of its container, nor does it expand to fill the entire volume available to it like a...
.

A liquid below its standard freezing point will crystallize in the presence of a seed crystal or nucleus
Nucleation
Nucleation is the extremely localized budding of a distinct thermodynamic phase. Some examples of phases that may form by way of nucleation in liquids are gaseous bubbles, crystals or glassy regions. Creation of liquid droplets in saturated vapor is also characterized by nucleation...
around which a crystal
Crystal
A crystal or crystalline solid is a solid material whose constituent atoms, molecules, or ions are arranged in an orderly repeating pattern extending in all three spatial dimensions. The scientific study of crystals and crystal formation is known as crystallography...
structure can form. However, lacking any such nucleus
Seed crystal
A seed crystal is a small piece of single crystal/polycrystal material from which a large crystal of the same material typically is to be grown...
, the liquid phase
Phase (matter)
In the physical sciences, a phase is a region of space , throughout which all physical properties of a material are essentially uniform. Examples of physical properties include density, index of refraction, and chemical composition...
can be maintained all the way down to the temperature at which crystal homogeneous nucleation occurs. The homogeneous nucleation can occur above the glass transition where the system is an amorphous (non-crystalline) solid.

Pure water
Water
Water is a chemical substance with the chemical formula H2O. A water molecule contains one oxygen and two hydrogen atoms connected by covalent bonds. Water is a liquid at ambient conditions, but it often co-exists on Earth with its solid state, ice, and gaseous state . Water also exists in a...
normally freezes at 273.15 K
Kelvin
The kelvin is a unit of measurement for temperature. It is one of the seven base units in the International System of Units and is assigned the unit symbol K. The Kelvin scale is an absolute, thermodynamic temperature scale using as its null point absolute zero, the temperature at which all...
(0 °C or 32 °F) but it can also be "supercooled" at standard pressure down to its crystal homogeneous nucleation at almost 224.8 K (−48.3 °C/−55 °F). If, however, it is cooled at a rate on the order of 106 K/s, the crystal nucleation can be avoided and water becomes a glass. Its glass transition temperature is much colder and harder to determine, but studies estimate it at about 165 K (−108 °C/−162.4 °F).
Glassy water
Amorphous ice
Amorphous ice is an amorphous solid form of water, meaning it consists of water molecules that are randomly arranged like the atoms of common glass. Everyday ice is a crystalline material where the atoms are regularly arranged in a lattice whereas amorphous ice is distinguished by a lack of...
can be heated up to approximately 150 K (−123 °C/−189.4 °F).
In the range of temperatures between 231 K (−42 °C/−43.6 °F) and 150 K (−123 °C/−189.4 °F) experiments find only crystal ice.

Some plants are able to supercool the fluid in their cells cytosol
Cytosol
The cytosol or intracellular fluid is the liquid found inside cells, that is separated into compartments by membranes. For example, the mitochondrial matrix separates the mitochondrion into compartments....
and vacuole
Vacuole
A vacuole is a membrane-bound organelle which is present in all plant and fungal cells and some protist, animal and bacterial cells. Vacuoles are essentially enclosed compartments which are filled with water containing inorganic and organic molecules including enzymes in solution, though in certain...
and thereby survive temperatures down to −40 °C. This is partly achieved through the synthesis of antifreeze protein
Antifreeze protein
Antifreeze proteins or ice structuring proteins refer to a class of polypeptides produced by certain vertebrates, plants, fungi and bacteria that permit their survival in subzero environments. AFPs bind to small ice crystals to inhibit growth and recrystallization of ice that would otherwise be...
s that prevent ice nucleation.

The osmotic concentration of the body fluids of fish is lower that the osmotic concentration of sea water. Therefore the freezing point of fish can be above (!) the temperature of sea water. Of course, the freezing point can be lowered by anti-freeze agents. But there are fish, whose freezing point is indeed higher than the temperature of the surrounding sea water, and therefore the body fluids of these fish are supercooled. These fish must live well below the water surface, because they must not get in contact with ice (otherwise they would freeze immediately , since they are only supercooled.).
Source: "Teleost fish have an osmotic concentration in their body fluids of about 300–400 mosm
Osmole (unit)
Osmolarity is the measure of solute concentration, defined as the number of osmoles of solute per litre of solution . The osmolarity of a solution is usually expressed as Osm/L , in the same way that the molarity of a solution is expressed as "M"...
, and this corresponds to a freezing point of about −0.6 to −0.8 °C. Sea water in the polar regions often has a temperature of about −1,8 °C ... Do they have a lower freezing point than ordinary fish, or do they remain supercooled throughout life? The answer is that both possibilities seem to have been realized.", Knut Schmidt-Nielsen, Animal Physiology, Adaption and Environment (Cambridge University Press, 1975), p.279.
"In summer, the surface fish in the Hebron Fjord, Labrador, have no freezing problem. The fish that live deeper, however, where the water is at −1.73 °C, have a freezing point in their body fluids of −1.0 °C and must remain supercooled (Scholander et al., 1957)." (Ibid., p. 280)

One commercial application of supercooling is in refrigeration
Refrigeration
Refrigeration is a process in which work is done to move heat from one location to another. This work is traditionally done by mechanical work, but can also be done by magnetism, laser or other means...
. For example, there are freezers that cool drinks to a supercooled level so that when it is opened it slushes over. Another example is a product that can supercool the beverage in a conventional freezer. The Coca-Cola Company
The Coca-Cola Company
The Coca-Cola Company is an American multinational beverage corporation and manufacturer, retailer and marketer of non-alcoholic beverage concentrates and syrups. The company is best known for its flagship product Coca-Cola, invented in 1886 by pharmacist John Stith Pemberton in Columbus, Georgia...
also briefly marketed special vending machines containing Sprite
Sprite
sprite or SPRITE may refer to:* any meaning of "spirit"** a ghost, the soul or spirit of a deceased person or animal that can appear, in visible form or other manifestation, to the living...
in the UK, and Coke in Singapore, which stored the bottles in a supercooled state so that they would turn to slush upon opening.