This article is about the phenomenon where a liquid can exist in a metastable state above its boiling point. See superheated water
Superheated water
Superheated water is liquid water under pressure at temperatures between the usual boiling point and the critical temperature . It is also known as subcritical water and pressurized hot water...
for pressurized water above 100˚C. See superheater
Superheater
A superheater is a device used to convert saturated steam or wet steam into dry steam used for power generation or processes. There are three types of superheaters namely: radiant, convection, and separately fired...
for the device used in steam engine
Steam engine
A steam engine is a heat engine that performs mechanical work using steam as its working fluid.Steam engines are external combustion engines, where the working fluid is separate from the combustion products. Non-combustion heat sources such as solar power, nuclear power or geothermal energy may be...
s.

In physics
Physics
Physics is a natural science that involves the study of matter and its motion through spacetime, along with related concepts such as energy and force. More broadly, it is the general analysis of nature, conducted in order to understand how the universe behaves.Physics is one of the oldest academic...
, superheating (sometimes referred to as boiling retardation, or boiling delay) is the phenomenon in which a liquid
Liquid
Liquid is one of the three classical states of matter . Like a gas, a liquid is able to flow and take the shape of a container. Some liquids resist compression, while others can be compressed. Unlike a gas, a liquid does not disperse to fill every space of a container, and maintains a fairly...
is heated to a temperature
Temperature
Temperature is a physical property of matter that quantitatively expresses the common notions of hot and cold. Objects of low temperature are cold, while various degrees of higher temperatures are referred to as warm or hot...
higher than its boiling point
Boiling point
The boiling point of an element or a substance is the temperature at which the vapor pressure of the liquid equals the environmental pressure surrounding the liquid....
, without boiling. Superheating is achieved by heating a homogeneous substance in a clean container, free of nucleation
Nucleation
Nucleation is the extremely localized budding of a distinct thermodynamic phase. Some examples of phases that may form by way of nucleation in liquids are gaseous bubbles, crystals or glassy regions. Creation of liquid droplets in saturated vapor is also characterized by nucleation...
sites, while taking care not to disturb the liquid. 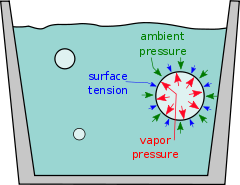 Superheating is an exception to this simple rule: a liquid is sometimes observed not to boil even though its vapor pressure does exceed the ambient pressure. The cause is an additional force, the surface tension
Surface tension
Surface tension is a property of the surface of a liquid that allows it to resist an external force. It is revealed, for example, in floating of some objects on the surface of water, even though they are denser than water, and in the ability of some insects to run on the water surface...
, which suppresses the growth of bubbles.

Surface tension makes the bubble act a bit like a rubber balloon (more precisely, one that is under-inflated so that the rubber is still elastic). The pressure inside is raised slightly by the "skin" attempting to contract. For the bubble to expand — to boil — the temperature must be raised slightly above the boiling point to generate enough vapor pressure.

What makes superheating so explosive is that a larger bubble is easier to inflate than a small one, just as when blowing up a balloon, the hardest part is getting it started. It turns out the excess pressure due to surface tension is inversely proportional to the diameter of the bubble. This means if the largest bubbles in a container are only a few micrometres in diameter, overcoming the surface tension may require exceeding the boiling point by several degrees Celsius. Once a bubble does begin to grow, the pressure due to the surface tension reduces, so it expands explosively. In practice, most containers have scratches or other imperfections which trap pockets of air that provide starting bubbles. But a container of liquid with only microscopic bubbles can superheat dramatically.

Superheating can occur when a person heats an undisturbed cup of water in a microwave oven
Microwave oven
A microwave oven is a kitchen appliance that heats food by dielectric heating, using microwave radiation to heat polarized molecules within the food...
. When the container is removed, the water still appears to be below the boiling point
Boiling point
The boiling point of an element or a substance is the temperature at which the vapor pressure of the liquid equals the environmental pressure surrounding the liquid....
. However, once the water is disturbed, some of it violently flashes
Flash evaporation
Flash evaporation is the partial vapor that occurs when a saturated liquid stream undergoes a reduction in pressure by passing through a throttling valve or other throttling device. This process is one of the simplest unit operations...
to steam
Steam
Steam is the technical term for water vapor, the gaseous phase of water, which is formed when water boils. In common language it is often used to refer to the visible mist of water droplets formed as this water vapor condenses in the presence of cooler air...
, spraying boiling water out of the container. The boiling can be triggered by jostling the cup, inserting a stirring device, or adding a substance like instant coffee
Instant coffee
Instant coffee, also called soluble coffee and coffee powder, is a beverage derived from brewed coffee beans. Instant coffee is commercially prepared by either freeze-drying or spray drying, after which it can be rehydrated...
or sugar. The chances of superheating are greater with smooth containers, because scratches or chips can house small pockets of air, which serve as nucleation
Nucleation
Nucleation is the extremely localized budding of a distinct thermodynamic phase. Some examples of phases that may form by way of nucleation in liquids are gaseous bubbles, crystals or glassy regions. Creation of liquid droplets in saturated vapor is also characterized by nucleation...
points. Chances of superheating can increase with repeated heating and cooling cycles of an undisturbed container, like when a forgotten coffee cup is re-heated without being removed from a microwave oven. This is due to heating cycles progressively de-gassing the liquid. There are ways to prevent superheating in a microwave oven, such as putting a popsicle stick in the glass or using a scratched container.