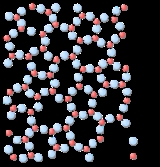 Encyclopedia
In condensed matter physics
Condensed matter physics
Condensed matter physics deals with the physical properties of condensed phases of matter. These properties appear when a number of atoms at the supramolecular and macromolecular scale interact strongly and adhere to each other or are otherwise highly concentrated in a system. The most familiar...
, an amorphous (from the Greek
Greek language
Greek is an independent branch of the Indo-European family of languages. Native to the southern Balkans, it has the longest documented history of any Indo-European language, spanning 34 centuries of written records. Its writing system has been the Greek alphabet for the majority of its history;...
a, without, morphé, shape, form) or non-crystalline solid is a solid
Solid
Solid is one of the three classical states of matter . It is characterized by structural rigidity and resistance to changes of shape or volume. Unlike a liquid, a solid object does not flow to take on the shape of its container, nor does it expand to fill the entire volume available to it like a...
that lacks the long-range order characteristic of a crystal
Crystal
A crystal or crystalline solid is a solid material whose constituent atoms, molecules, or ions are arranged in an orderly repeating pattern extending in all three spatial dimensions. The scientific study of crystals and crystal formation is known as crystallography...
.

Other types of amorphous solids include gel
Gel
A gel is a solid, jelly-like material that can have properties ranging from soft and weak to hard and tough. Gels are defined as a substantially dilute cross-linked system, which exhibits no flow when in the steady-state...
s, thin film
Thin film
A thin film is a layer of material ranging from fractions of a nanometer to several micrometers in thickness. Electronic semiconductor devices and optical coatings are the main applications benefiting from thin film construction....
s, and nanostructured materials.

It is difficult to make a distinction between truly amorphous solids and crystalline solids if the size of the crystals are very small. Even amorphous materials have some short-range order at the atomic length scale due to the nature of chemical bonding. Furthermore, in very small crystal
Crystal
A crystal or crystalline solid is a solid material whose constituent atoms, molecules, or ions are arranged in an orderly repeating pattern extending in all three spatial dimensions. The scientific study of crystals and crystal formation is known as crystallography...
s a large fraction of the atom
Atom
The atom is a basic unit of matter that consists of a dense central nucleus surrounded by a cloud of negatively charged electrons. The atomic nucleus contains a mix of positively charged protons and electrically neutral neutrons...
s are located at or near the surface of the crystal; relaxation of the surface and interfacial effects distort the atomic positions, decreasing the structural order. Even the most advanced structural characterization techniques, such as x-ray diffraction and transmission electron microscopy, have difficulty in distinguishing between amorphous and crystalline structures on these length scales.

Amorphous phases are important constituents of thin film
Thin film
A thin film is a layer of material ranging from fractions of a nanometer to several micrometers in thickness. Electronic semiconductor devices and optical coatings are the main applications benefiting from thin film construction....
s, which are solid layers of a few nm to some tens of µm
Micrometre
A micrometer , is by definition 1×10-6 of a meter .In plain English, it means one-millionth of a meter . Its unit symbol in the International System of Units is μm...
thickness deposited upon an underlying substrate. So-called structure zone models were developed to describe the microstructure and
ceramics of thin films as a function of the homologous temperature Th that is the ratio of deposition temperature over melting temperature. According to these models, a necessary (but not sufficient) condition for the occurrence of amorphous phases is that Th has to be smaller than 0.3, that is the deposition temperature must be below 30% of the melting temperature. For higher values, the surface diffusion of deposited atomic species would allow for the formation of crystallites with long range atomic order.

Regarding their applications, amorphous metallic layers played an important role in the discussion of a suspected superconductivity
Superconductivity
Superconductivity is a phenomenon of exactly zero electrical resistance occurring in certain materials below a characteristic temperature. It was discovered by Heike Kamerlingh Onnes on April 8, 1911 in Leiden. Like ferromagnetism and atomic spectral lines, superconductivity is a quantum...
in amorphous metals. Today, optical coatings made from TiO2
Titanium dioxide
Titanium dioxide, also known as titanium oxide or titania, is the naturally occurring oxide of titanium, chemical formula . When used as a pigment, it is called titanium white, Pigment White 6, or CI 77891. Generally it comes in two different forms, rutile and anatase. It has a wide range of...
, SiO2
Silicon dioxide
The chemical compound silicon dioxide, also known as silica , is an oxide of silicon with the chemical formula '. It has been known for its hardness since antiquity...
, Ta2O5 etc. and combinations of them in most cases consist of amorphous phases of these compounds. Much research is carried out into thin amorphous films as a gas separating membrane
Biological membrane
A biological membrane or biomembrane is an enclosing or separatingmembrane that acts as a selective barrier, within or around a cell. It consists of a lipid bilayer with embedded proteins that may constitute close to 50% of membrane content...
layer. The technologically most important thin amorphous film is probably represented by few nm thin SiO2 layers serving as isolator above the conducting channel of a metal-oxide semiconductor field-effect transistor (MOSFET
MOSFET
The metal–oxide–semiconductor field-effect transistor is a transistor used for amplifying or switching electronic signals. The basic principle of this kind of transistor was first patented by Julius Edgar Lilienfeld in 1925...
). Also, hydrogenated amorphous silicon
Amorphous silicon
Amorphous silicon is the non-crystalline allotropic form of silicon. It can be deposited in thin films at low temperatures onto a variety of substrates, offering some unique capabilities for a variety of electronics.-Description:...
, a-Si:H in short, is of technical significance for thin film solar cells. In case of a-Si:H the missing long-range order between silicon atoms is partly induced by the presence by hydrogen in the percent range.

The occurrence of amorphous phases turned out as a phenomenon of particular interest for studying thin film growth. Remarkably, the growth of polycrystalline films is often preceded by an initial amorphous layer, the thickness of which may amount to only a few nm. The most investigated example is represented by thin multicrystalline silicon films, where such an initial amorphous layer was observed in many studies. Wedge-shaped polycrystals were identified by transmission electron microscopy
Transmission electron microscopy
Transmission electron microscopy is a microscopy technique whereby a beam of electrons is transmitted through an ultra thin specimen, interacting with the specimen as it passes through...
to grow out of the amorphous phase only after the latter has exceeded a certain thickness, the precise value of which depends on deposition temperature, background pressure and various other process parameters. The phenomenon has been interpreted in the framework of Ostwald's rule of stages that predicts the formation of phases to proceed with increasing condensation time towards increasing stability. Experimental studies of the phenomenon require a clearly defined state of the substrate surface and its contaminant density etc., upon which the thin film is deposited.