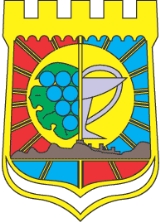 It became an important location for trading on the Silk Road
Silk Road
The Silk Road or Silk Route refers to a historical network of interlinking trade routes across the Afro-Eurasian landmass that connected East, South, and Western Asia with the Mediterranean and European world, as well as parts of North and East Africa...
in the 12th and 13th centuries, despite attacks by the Kypchaks
Kipchaks
Kipchaks were a Turkic tribal confederation...
in the 11th century and further damages inflicted by the Tatars
Tatars
Tatars are a Turkic speaking ethnic group , numbering roughly 7 million.The majority of Tatars live in the Russian Federation, with a population of around 5.5 million, about 2 million of which in the republic of Tatarstan.Significant minority populations are found in Uzbekistan, Kazakhstan,...
(in 1223, but also in 1239). The Seljuk Anatolia
Anatolia
Anatolia is a geographic and historical term denoting the westernmost protrusion of Asia, comprising the majority of the Republic of Turkey...
n Sultanate of Iconium army and fleet from Sinop
Sinop, Turkey
Sinop is a city with a population of 36,734 on İnce Burun , by its Cape Sinop which is situated on the most northern edge of the Turkish side of Black Sea coast, in the ancient region of Paphlagonia, in modern-day northern Turkey, historically known as Sinope...
held and fortified Sudak in 1224. 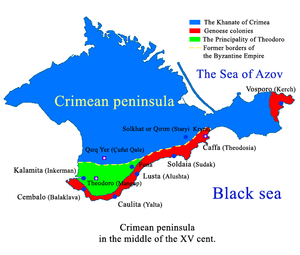 The Venetians
Republic of Venice
The Republic of Venice or Venetian Republic was a state originating from the city of Venice in Northeastern Italy. It existed for over a millennium, from the late 7th century until 1797. It was formally known as the Most Serene Republic of Venice and is often referred to as La Serenissima, in...
also came to Sudak at the beginning of the 13th century to take their share, naming the fortress Soldaia, before ceding it to Genoese control in 1365. The Ottomans
Ottoman Empire
The Ottoman EmpireIt was usually referred to as the "Ottoman Empire", the "Turkish Empire", the "Ottoman Caliphate" or more commonly "Turkey" by its contemporaries...
took control of Soldaia and all other Genoese colonies, as well as the Principality of Theodoro
Principality of Theodoro
The Principality of Theodoro , also known as Gothia , was a small principality in the south-west of Crimea from the 13th through 15th centuries. Its capital was Doros, which was also sometimes called Theodoro and is now known as Mangup...
in 1475. Although Sudak was the strategical center of the qadılıq, the smallest administrative unit of the Ottoman Empire, the town lost much of its military and commercial importance, until the Crimean Khanate
Crimean Khanate
Crimean Khanate, or Khanate of Crimea , was a state ruled by Crimean Tatars from 1441 to 1783. Its native name was . Its khans were the patrilineal descendants of Toqa Temür, the thirteenth son of Jochi and grandson of Genghis Khan...
took over.

In 1771, Sudak was occupied by Rumyantsev's
Rumyantsev
The Rumyantsev family were Russian counts prominent in Russian imperial politics in the 18th and early 19th centuries. The family claimed descent from the boyar Rumyanets who broke his oath of allegiance and surrendered Nizhny Novgorod to Vasily I of Moscow in 1391.The first Rumyantsev to gain...
army. In 1783, it definitively passed to the Russian Empire
Russian Empire
The Russian Empire was a state that existed from 1721 until the Russian Revolution of 1917. It was the successor to the Tsardom of Russia and the predecessor of the Soviet Union...
, with the rest of Crimea
Crimea
Crimea , or the Autonomous Republic of Crimea , is a sub-national unit, an autonomous republic, of Ukraine. It is located on the northern coast of the Black Sea, occupying a peninsula of the same name...
. Though sometimes contested, it seems that a mass emigration occurred as a result of the ensuing instability in that period. Even Potemkin
Pavel Potemkin
Count Pavel Sergeevich Potemkin, also Potyomkin , was a Imperial Russian statesman, soldier and writer.He was a cousin of Grigori Alexandrovich Potemkin, a well-known military and political figure of Catherine II’s Russia. He took part in the wars with the rebel adventurer Pugachev, the Ottoman...
ordered in 1778 the eviction of the Christian population
Christian
A Christian is a person who adheres to Christianity, an Abrahamic, monotheistic religion based on the life and teachings of Jesus of Nazareth as recorded in the Canonical gospels and the letters of the New Testament...
from Crimea. The town rapidly turned into a small village, and according to the 1805 census, Sudak had just 33 inhabitants.

In 1804, the first Russian school of viticulture
Viticulture
Viticulture is the science, production and study of grapes which deals with the series of events that occur in the vineyard. When the grapes are used for winemaking, it is also known as viniculture...
was opened there.

The present status of the town was acquired in 1982.