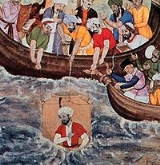 A submersible is a small vehicle
Vehicle
A vehicle is a device that is designed or used to transport people or cargo. Most often vehicles are manufactured, such as bicycles, cars, motorcycles, trains, ships, boats, and aircraft....
designed to operate underwater. The term submersible is often used to differentiate from other underwater vehicles known as submarine
Submarine
A submarine is a watercraft capable of independent operation below the surface of the water. It differs from a submersible, which has more limited underwater capability...
s, in that a submarine is a fully autonomous craft, capable of renewing its own power and breathing air, whereas a submersible is usually supported by a surface vessel, platform, shore team or sometimes a larger submarine. In common usage by the general public, however, the word submarine may be used to describe a craft that is by the technical definition actually a submersible. There are many types of submersibles, including both manned and unmanned craft, otherwise known as remotely operated vehicle
Remotely operated vehicle
A remotely operated vehicle is a tethered underwater vehicle. They are common in deepwater industries such as offshore hydrocarbon extraction. An ROV may sometimes be called a remotely operated underwater vehicle to distinguish it from remote control vehicles operating on land or in the air. ROVs...
s or ROVs. Submersibles have many uses worldwide, such as oceanography
Oceanography
Oceanography , also called oceanology or marine science, is the branch of Earth science that studies the ocean...
, underwater archaeology
Underwater archaeology
Underwater archaeology is archaeology practised underwater. As with all other branches of archaeology it evolved from its roots in pre-history and in the classical era to include sites from the historical and industrial eras...
, ocean exploration
Ocean exploration
Ocean exploration is a term of biography describing the exploration of the ocean. It is also the period when people explored the ocean fishies. Notable explorers include: the Greeks, the Egyptians, the Polynesians, the Phoenicians, Phytheas, Herodotus, the Vikings, The Portuguese, and Christopher...
, adventure, equipment maintenance/recovery or underwater videography
Underwater videography
Underwater videography is a video production, the branch of underwater photography concerned with capturing underwater moving images either as a recreational diving or commercial documentary, or filmmaking activity.-Limitations:...
.

Apart from size, the main technical difference between a "submersible" and a "submarine" is that submersibles are not fully autonomous and may rely on a support facility or vessel for replenishment of power and breathing gases. Submersibles typically have shorter range, and operate primarily underwater, as most have little function at the surface. Some submersibles operate on a "tether" or "umbilical", remaining connected to a tender
Ship's tender
A ship's tender, usually referred to as a tender, is a boat, or a larger ship used to service a ship, generally by transporting people and/or supplies to and from shore or another ship...
(a submarine, surface vessel or platform). Submersibles have been able to dive to over 10 km (6 mi) below the surface.

Submersibles may be relatively small, hold only a small crew, and have no living facilities.

A submersible often has very dexterous mobility, provided by propeller screws
Propeller
A propeller is a type of fan that transmits power by converting rotational motion into thrust. A pressure difference is produced between the forward and rear surfaces of the airfoil-shaped blade, and a fluid is accelerated behind the blade. Propeller dynamics can be modeled by both Bernoulli's...
or pump-jet
Pump-jet
A pump-jet, hydrojet, or water jet, is a marine system that creates a jet of water for propulsion. The mechanical arrangement may be a ducted propeller with nozzle, or a centrifugal pump and nozzle...
s.

Some submersibles have been able to dive to great depths. The Bathyscaphe Trieste
Bathyscaphe Trieste
The Trieste is a Swiss-designed, Italian-built deep-diving research bathyscaphe with a crew of two, which reached a record maximum depth of about , in the deepest known part of the Earth's oceans, the Challenger Deep, in the Mariana Trench near Guam, on January 23, 1960, crewed by Jacques Piccard ...
was the first to reach the deepest part of the ocean, nearly 11km (7 mi) below the surface, at the bottom of the Mariana Trench
Mariana Trench
The Mariana Trench or Marianas Trench is the deepest part of the world's oceans. It is located in the western Pacific Ocean, to the east of the Mariana Islands. The trench is about long but has a mean width of only...
in 1960. No other manned craft has been able to repeat the Trieste's historic dive since.
China
China
Chinese civilization may refer to:* China for more general discussion of the country.* Chinese culture* Greater China, the transnational community of ethnic Chinese.* History of China* Sinosphere, the area historically affected by Chinese culture...
, with its Jiaolong project in 2002, was the fifth country to send a man 3,500 meters below sea level, following the US, France, Russia and Japan. China's State Oceanic Administration (SOA) said a Chinese manned deep-sea submersible reached a depth 5,115 meters. The Jialong submersible was designed to reach depths of up to 7,000 meters below sea level and is expected to have a 7,000-meter test dive in 2012.

Small unmanned submersibles called "marine remotely operated vehicles" or MROVs are widely used today to work in water too deep or too dangerous for divers.

Remotely operated vehicles (ROV
Rov
Rov is a Talmudic concept which means the majority.It is based on the passage in Exodus 23;2: "after the majority to wrest" , which in Rabbinic interpretation means, that you shall accept things as the majority....
s) repair offshore oil platforms
Oil platform
An oil platform, also referred to as an offshore platform or, somewhat incorrectly, oil rig, is a lаrge structure with facilities to drill wells, to extract and process oil and natural gas, and to temporarily store product until it can be brought to shore for refining and marketing...
and attach cables to sunken ships to hoist them. Such remotely operated vehicles are attached by a tether (a thick cable providing power and communications) to a control center on a ship. Operators on the ship see video images sent back from the robot and may control its propellers and manipulator arm. The wreck of the Titanic was explored by such a vehicle, as well as by a manned vessel.