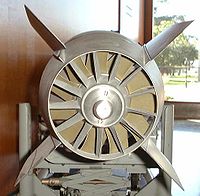 A pump-jet, hydrojet, or water jet, is a marine
Ocean
An ocean is a major body of saline water, and a principal component of the hydrosphere. Approximately 71% of the Earth's surface is covered by ocean, a continuous body of water that is customarily divided into several principal oceans and smaller seas.More than half of this area is over 3,000...
system that creates a jet of water
Water
Water is a chemical substance with the chemical formula H2O. A water molecule contains one oxygen and two hydrogen atoms connected by covalent bonds. Water is a liquid at ambient conditions, but it often co-exists on Earth with its solid state, ice, and gaseous state . Water also exists in a...
for propulsion
Marine propulsion
Marine propulsion is the mechanism or system used to generate thrust to move a ship or boat across water. While paddles and sails are still used on some smaller boats, most modern ships are propelled by mechanical systems consisting a motor or engine turning a propeller, or less frequently, in jet...
. The mechanical arrangement may be a ducted propeller
Ducted propeller
A ducted propeller is a propeller fitted with a non-rotating nozzle. It is used to improve the efficiency of the propeller and are especially used on heavily loaded propellers or propellers with limited diameter. It was developed by Luigi Stipa and Ludwig Kort .Advantages are increased efficiency,...
with nozzle
Nozzle
A nozzle is a device designed to control the direction or characteristics of a fluid flow as it exits an enclosed chamber or pipe via an orifice....
, or a centrifugal pump
Centrifugal pump
A centrifugal pump is a rotodynamic pump that uses a rotating impeller to create flow by the addition of energy to a fluid. Centrifugal pumps are commonly used to move liquids through piping...
and nozzle. The first functioning man-made pump-jet engine was created by New Zealand
New Zealand
New Zealand is an island country in the south-western Pacific Ocean comprising two main landmasses and numerous smaller islands. The country is situated some east of Australia across the Tasman Sea, and roughly south of the Pacific island nations of New Caledonia, Fiji, and Tonga...
inventor Sir William Hamilton
Bill Hamilton (engineer)
Sir Charles William Feilden Hamilton , commonly known as Bill Hamilton, was a New Zealander who developed the modern jetboat, and founder of what is now the world's leading water jet manufacturing company - CWF Hamilton Ltd .Hamilton never claimed to have invented the jet boat. He once said "I do...
in 1954.

Pump jets have some advantages over bare propellers for certain applications, usually relate to requirements for high-speed or shallow-draft
Draft (hull)
The draft of a ship's hull is the vertical distance between the waterline and the bottom of the hull , with the thickness of the hull included; in the case of not being included the draft outline would be obtained...
operations. These include: