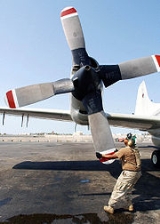 Overview
A propeller is a type of fan
Fan (mechanical)
A mechanical fan is a machine used to create flow within a fluid, typically a gas such as air.A fan consists of a rotating arrangement of vanes or blades which act on the air. Usually, it is contained within some form of housing or case. This may direct the airflow or increase safety by preventing...
that transmits power by converting rotational motion into thrust
Thrust
Thrust is a reaction force described quantitatively by Newton's second and third laws. When a system expels or accelerates mass in one direction the accelerated mass will cause a force of equal magnitude but opposite direction on that system....
. A pressure difference is produced between the forward and rear surfaces of the airfoil
Airfoil
An airfoil or aerofoil is the shape of a wing or blade or sail as seen in cross-section....
-shaped blade, and a fluid (such as air or water) is accelerated behind the blade. Propeller dynamics can be modeled by both Bernoulli's principle
Bernoulli's principle
In fluid dynamics, Bernoulli's principle states that for an inviscid flow, an increase in the speed of the fluid occurs simultaneously with a decrease in pressure or a decrease in the fluid's potential energy...
and Newton's third law
Newton's laws of motion
Newton's laws of motion are three physical laws that form the basis for classical mechanics. They describe the relationship between the forces acting on a body and its motion due to those forces...
. A propeller is often colloquially known as screw both in aviation and maritime.
The principle employed in using a screw propeller is used in sculling
Sculling
Sculling generally refers to a method of using oars to propel watercraft in which the oar or oars touch the water on both the port and starboard sides of the craft, or over the stern...
.

Show me the picture of marine impeller.
More
x