A semi-submersible is a specialised marine vessel with good stability and seakeeping
Seakeeping
Seakeeping ability is a measure of how well-suited a watercraft is to conditions when underway. A ship or boat which has good seakeeping ability is said to be very seaworthy and is able to operate effectively even in high sea states....
characteristics. The semi-submersible vessel design is commonly used in a number of specific offshore roles such as for offshore drilling rigs
Offshore drilling
Offshore drilling refers to a mechanical process where a wellbore is drilled through the seabed. It is typically carried out in order to explore for and subsequently produce hydrocarbons which lie in rock formations beneath the seabed...
, safety vessels, oil production platforms and heavy lift cranes.

The terms semisubmersible, semi-sub or just semi are also generally used for this vessel design.

Offshore drilling in water depth greater than around 120 meters requires that operations be carried out from a floating vessel, as fixed structures are not practical. Initially in the early 1950s monohull ships were used like CUSS I, but these were found to have significant heave, pitch and yaw motions in large waves, and the industry needed more stable drilling platforms.

A semi-submersible obtains its buoyancy from ballasted, watertight pontoons
Floats (nautical)
Floats are airtight hollow structures, similar to pressure vessels, whose air-filled interior makes them buoyant in water. They are most often used to make up the multipart hulls of trimarans, small open catamarans, and floatplanes . Their main purpose is to supply buoyancy, not storage space...
located below the ocean surface and wave action. The operating deck can be located high above the sea level due to the good stability of the concept, and therefore the operating deck is kept well away from the waves. Structural columns connect the pontoons and operating deck.

A semi-submersible vessel is able to transform from a deep to a shallow draft
Draft (hull)
The draft of a ship's hull is the vertical distance between the waterline and the bottom of the hull , with the thickness of the hull included; in the case of not being included the draft outline would be obtained...
by deballasting (removing ballast water from the hull), and thereby become a surface vessel. The heavy lift vessels use this capability to submerge the majority of their structure, locate beneath another floating vessel, and then deballast to pick up the other vessel as a cargo. 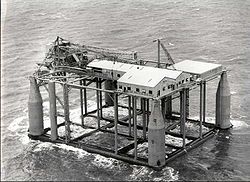 The semi-submersible design was first developed for offshore drilling
Oil platform
An oil platform, also referred to as an offshore platform or, somewhat incorrectly, oil rig, is a lаrge structure with facilities to drill wells, to extract and process oil and natural gas, and to temporarily store product until it can be brought to shore for refining and marketing...
activities. Bruce Collipp of Shell
Royal Dutch Shell
Royal Dutch Shell plc , commonly known as Shell, is a global oil and gas company headquartered in The Hague, Netherlands and with its registered office in London, United Kingdom. It is the fifth-largest company in the world according to a composite measure by Forbes magazine and one of the six...
is regarded as the inventor.
But Edward Robert Armstrong
Edward Robert Armstrong
Edward Robert Armstrong was a Canadian born engineer and inventor who in 1927 proposed a series of "seadrome" floating airport platforms for airplanes to land on and refuel for transatlantic flights...
may have paved the way with his idea of 'seadrome' landing strips for airplanes in the late 1920s, since his idea involved the same use of columns on ballast tanks below the surface and anchored to the ocean floor by steel cables.

When oil drilling moved into offshore waters, fixed platform rigs and submersible rigs
Submersible drilling rig
A submersible drilling rig is a marine vessel design that can be floated to location and lowered onto the sea floor for offshore drilling activities.-Design and operation:The submersible drilling platform is supported on large pontoon-like structures...
were built, but were limited to shallow waters. When demands for drilling equipment was needed in water depths greater than 100 feet (30 m) in the Gulf of Mexico
Gulf of Mexico
The Gulf of Mexico is a partially landlocked ocean basin largely surrounded by the North American continent and the island of Cuba. It is bounded on the northeast, north and northwest by the Gulf Coast of the United States, on the southwest and south by Mexico, and on the southeast by Cuba. In...
, the first jackup rig
Jackup rig
A jack-up rig is a type of mobile platform that is able to stand still on the sea floor, resting on a number of supporting legs. The most popular designs use 3 independent legs, although some jackups have 4 legs or more...
s were built.

The first semisubmersible arrived by accident in 1961. Blue Water Drilling Company owned and operated the four column submersible drilling rig
Submersible drilling rig
A submersible drilling rig is a marine vessel design that can be floated to location and lowered onto the sea floor for offshore drilling activities.-Design and operation:The submersible drilling platform is supported on large pontoon-like structures...
Blue Water Rig No.1 in the Gulf of Mexico for Shell Oil Company
Royal Dutch Shell
Royal Dutch Shell plc , commonly known as Shell, is a global oil and gas company headquartered in The Hague, Netherlands and with its registered office in London, United Kingdom. It is the fifth-largest company in the world according to a composite measure by Forbes magazine and one of the six...
. As the pontoons
Pontoon (boat)
A pontoon is a flotation device with buoyancy sufficient to float itself as well as a heavy load. A pontoon boat is a flattish boat that relies on pontoons to float. Pontoons may be used on boats, rafts, barges, docks, floatplanes or seaplanes. Pontoons may support a platform, creating a raft. A...
were not sufficiently buoyant to support the weight of the rig and its consumables, it was towed between locations at a draught mid way between the top of the pontoons and the underside of the deck. It was observed that the motions at this draught were very small and Blue Water Drilling and Shell jointly decided that the rig could be operated in the floating mode.

The first purpose built drilling semi-submersible Ocean Driller was launched in 1963. Since then, many semi-submersibles have been purpose-designed for the drilling industry mobile offshore fleet.

The industry quickly accepted the semi-submersible concept and the fleet increased rapidly to 30 units by 1972.

Semi-submersible rigs make stable platforms for drilling for offshore oil and gas. They can be towed into position by a tugboat
Tugboat
A tugboat is a boat that maneuvers vessels by pushing or towing them. Tugs move vessels that either should not move themselves, such as ships in a crowded harbor or a narrow canal,or those that cannot move by themselves, such as barges, disabled ships, or oil platforms. Tugboats are powerful for...
and anchored, or moved by and kept in position by their own azimuth thruster
Azimuth thruster
An azimuth thruster is a configuration of ship propellers placed in pods that can be rotated in any horizontal direction, making a rudder unnecessary...
s with dynamic positioning
Dynamic positioning
Dynamic positioning is a computer controlled system to automatically maintain a vessel's position and heading by using its own propellers and thrusters...
. 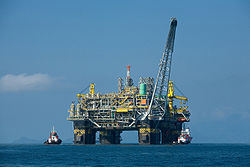 During transit an SSCV will be de-ballasted to a draught where only part of the lower hull is submerged. During lifting operations, the vessel will be ballasted down. This way, the lower hull is well submerged. This reduces the effect of waves and swell. High stability is obtained by placing the columns far apart. The high stability allows them to lift extreme high loads.

Semi-submersibles are particularly suited to a number of offshore support vessel roles because of their good stability, large deck areas, and variable deck load (VDL). Some of the most prominent vessels are;

A summary of offshore semi-submersible oil production platforms is given in the following table derived from industry data.