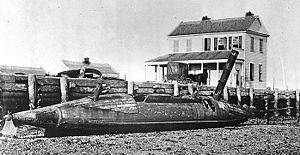 CSS David was a Civil War-era torpedo boat built as a private venture by T. Stoney at Charleston
Charleston, South Carolina
Charleston is the second largest city in the U.S. state of South Carolina. It was made the county seat of Charleston County in 1901 when Charleston County was founded. The city's original name was Charles Towne in 1670, and it moved to its present location from a location on the west bank of the...
, South Carolina
South Carolina
South Carolina is a state in the Deep South of the United States that borders Georgia to the south, North Carolina to the north, and the Atlantic Ocean to the east. Originally part of the Province of Carolina, the Province of South Carolina was one of the 13 colonies that declared independence...
in 1863, and put under the control of the Confederate States Navy
Confederate States Navy
The Confederate States Navy was the naval branch of the Confederate States armed forces established by an act of the Confederate Congress on February 21, 1861. It was responsible for Confederate naval operations during the American Civil War...
. The cigar-shaped boat carried a 60- or 70-pound explosive charge on the end of a spar projecting forward from her bow. Designed to operate very low in the water, David resembled in general a submarine
Submarine
A submarine is a watercraft capable of independent operation below the surface of the water. It differs from a submersible, which has more limited underwater capability...
; she was, however, strictly a surface vessel. Operating on dark nights, and using anthracite coal
Anthracite coal
Anthracite is a hard, compact variety of mineral coal that has a high luster...
which burns without smoke, David was nearly as hard to see as a true submarine.

On the night of October 5, 1863, David, commanded by Lieutenant
Lieutenant
A lieutenant is a junior commissioned officer in many nations' armed forces. Typically, the rank of lieutenant in naval usage, while still a junior officer rank, is senior to the army rank...
William T. Glassell
William T. Glassell
William Thornton Glassell was an officer in the Confederate States Navy during the American Civil War. He was one of the world's first combat submariners...
, CSN, slipped down Charleston Harbor to attack the casemated ironclad steamer
Steamboat
A steamboat or steamship, sometimes called a steamer, is a ship in which the primary method of propulsion is steam power, typically driving propellers or paddlewheels...
USS New Ironsides. The torpedo boat
Torpedo boat
A torpedo boat is a relatively small and fast naval vessel designed to carry torpedoes into battle. The first designs rammed enemy ships with explosive spar torpedoes, and later designs launched self-propelled Whitehead torpedoes. They were created to counter battleships and other large, slow and...
approached undetected until she was within 50 yards of the blockader. Hailed by the watch on board New Ironsides, Glassell replied with a blast from a shotgun and David plunged ahead to strike. Her spar torpedo
Spar torpedo
A spar torpedo is a weapon consisting of a bomb placed at the end of a long pole, or spar, and attached to a boat. The weapon is used by running the end of the spar into the enemy ship. Spar torpedoes were often equipped with a barbed spear at the end, so it would stick to wooden hulls...
detonated under the starboard quarter of the ironclad, throwing high a column of water which rained back upon the Confederate vessel and put out her boiler fires. Her engine dead, David hung under the quarter of New Ironsides while small arms fire from the Federal ship spattered the water around the torpedo boat.

Believing that their vessel was sinking, Glassell and two others abandoned her; the pilot, Walker Cannon, who could not swim, remained on board. A short time later, Assistant Engineer J. H. Tomb swam back to the craft and climbed on board. Rebuilding the fires, Tomb succeeded in getting David's engine working again, and with Cannon at the wheel, the torpedo boat steamed up the channel to safety. Glassell and Seaman
Seaman
Seaman is one of the lowest ranks in a Navy. In the Commonwealth it is the lowest rank in the Navy, followed by Able Seaman and Leading Seaman, and followed by the Petty Officer ranks....
James Sullivan, Davids fireman, were captured. New Ironsides, though not sunk, was seriously damaged by the explosion. US Navy casualites were Acting Ensign C.W.Howard (died of gunshot wound), Seaman William L. Knox (legs broken) and Master at Arms Thomas Little (contusions).

The next 4 months of Davids existence are obscure. She or other torpedo boats tried more attacks on Union blockaders; reports from different ships claim three such attempts, all unsuccessful, during the remainder of October 1863. On March 6, 1864, David attacked USS Memphis
USS Memphis (1862)
The second USS Memphis was a 7‑gun screw steamer, built by William Denny and Brothers, Dumbarton, Scotland in 1861, which briefly served as a Confederate blockade runner before being captured and taken into the Union Navy during the American Civil War....
in the North Edisto River. The torpedo boat struck the blockader first on the port quarter, but the torpedo did not explode. Memphis slipped her chain, at the same time firing ineffectively at David with small arms. Putting about, the torpedo boat struck Memphis again, this time a glancing blow on the starboard quarter; once more the torpedo misfired. Since Memphis had now opened up with her heavy guns, David, having lost part of her stack when rammed, retreated up the river out of range. Memphis, uninjured, resumed her blockading station.

Davids last confirmed action came on April 18, 1864 when she tried to sink the screw frigate
Screw frigate
Steam frigates and the smaller steam corvettes were steam-powered warships.The first vessel that can be considered a steam frigate was the Demologos which was launched in 1815 for the United States Navy....
USS Wabash
USS Wabash (1855)
USS Wabash was a steam screw frigate of the United States Navy that served during the American Civil War. She was based on the same plans as . Post-war she continued to serve her country in European operations and eventually served as a barracks ship in Boston, Massachusetts, and was sold in...
. Alert lookouts on board the blockader sighted David in time to permit the frigate to slip her chain, avoid the attack, and open fire on the torpedo boat. Neither side suffered any damage.

The ultimate fate of David is uncertain. Several torpedo boats of this type fell into Union hands when Charleston was captured in February 1865. David may well have been among them.