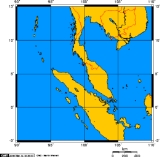 Overview
The Strait of Malacca is a narrow, 805 km (500.2 mi) stretch of water between the Malay Peninsula
Malay Peninsula
The Malay Peninsula or Thai-Malay Peninsula is a peninsula in Southeast Asia. The land mass runs approximately north-south and, at its terminus, is the southern-most point of the Asian mainland...
(Peninsular Malaysia
Peninsular Malaysia
Peninsular Malaysia , also known as West Malaysia , is the part of Malaysia which lies on the Malay Peninsula. Its area is . It shares a land border with Thailand in the north. To the south is the island of Singapore. Across the Strait of Malacca to the west lies the island of Sumatra...
) and the Indonesia
Indonesia
Indonesia , officially the Republic of Indonesia , is a country in Southeast Asia and Oceania. Indonesia is an archipelago comprising approximately 13,000 islands. It has 33 provinces with over 238 million people, and is the world's fourth most populous country. Indonesia is a republic, with an...
n island of Sumatra
Sumatra
Sumatra is an island in western Indonesia, westernmost of the Sunda Islands. It is the largest island entirely in Indonesia , and the sixth largest island in the world at 473,481 km2 with a population of 50,365,538...
. It is named after the Malacca Sultanate
Malacca Sultanate
Established by the Malay ruler Parameswara, the Sultanate of Malacca was first a Hindu kingdom in 1402 and later became Muslim following the marriage of the princess of Pasai in 1409. Centered in the modern town of Malacca, the sultanate bordered the Ayutthaya Kingdom of Siam in the north to...
that ruled over the archipelago between 1414 to 1511.
The International Hydrographic Organization
International Hydrographic Organization
The International Hydrographic Organization is the inter-governmental organisation representing the hydrographic community. It enjoys observer status at the UN and is the recognised competent authority on hydrographic surveying and nautical charting...
defines the limits of the "Malacca Strait" as follows:


On the West. A line joining Pedropunt, the Northernmost point of Sumatra
Sumatra
Sumatra is an island in western Indonesia, westernmost of the Sunda Islands. It is the largest island entirely in Indonesia , and the sixth largest island in the world at 473,481 km2 with a population of 50,365,538...
(5°40′N 95°26′E) and Lem Voalan the Southern extremity of Goh Puket Phuket Island
Phuket Province
Phuket , formerly known as Thalang and, in Western sources, Junk Ceylon , is one of the southern provinces of Thailand...
in Siam Thailand
Thailand
Thailand , officially the Kingdom of Thailand , formerly known as Siam , is a country located at the centre of the Indochina peninsula and Southeast Asia. It is bordered to the north by Burma and Laos, to the east by Laos and Cambodia, to the south by the Gulf of Thailand and Malaysia, and to the...
(7°45′N 98°18′E).


On the East. A line joining Tanjong Piai


On the North. The Southwestern coast of the Malay Peninsula.


On the South. The Northeastern coast of Sumatra as far to the eastward as Tanjong Kedabu (1°06′N 102°58′E) thence to Klein Karimoen.

From an economic and strategic perspective, the Strait
Strait
A strait or straits is a narrow, typically navigable channel of water that connects two larger, navigable bodies of water. It most commonly refers to a channel of water that lies between two land masses, but it may also refer to a navigable channel through a body of water that is otherwise not...
of Malacca
Malacca
Malacca , dubbed The Historic State or Negeri Bersejarah among locals) is the third smallest Malaysian state, after Perlis and Penang. It is located in the southern region of the Malay Peninsula, on the Straits of Malacca. It borders Negeri Sembilan to the north and the state of Johor to the south...
is one of the most important shipping lanes in the world.

The strait is the main shipping channel between the Indian Ocean
Indian Ocean
The Indian Ocean is the third largest of the world's oceanic divisions, covering approximately 20% of the water on the Earth's surface. It is bounded on the north by the Indian Subcontinent and Arabian Peninsula ; on the west by eastern Africa; on the east by Indochina, the Sunda Islands, and...
and the Pacific Ocean
Pacific Ocean
The Pacific Ocean is the largest of the Earth's oceanic divisions. It extends from the Arctic in the north to the Southern Ocean in the south, bounded by Asia and Australia in the west, and the Americas in the east.At 165.2 million square kilometres in area, this largest division of the World...
, linking major Asian economies such as India
India
India , officially the Republic of India , is a country in South Asia. It is the seventh-largest country by geographical area, the second-most populous country with over 1.2 billion people, and the most populous democracy in the world...
, China
People's Republic of China
China , officially the People's Republic of China , is the most populous country in the world, with over 1.3 billion citizens. Located in East Asia, the country covers approximately 9.6 million square kilometres...
, Japan
Japan
Japan is an island nation in East Asia. Located in the Pacific Ocean, it lies to the east of the Sea of Japan, China, North Korea, South Korea and Russia, stretching from the Sea of Okhotsk in the north to the East China Sea and Taiwan in the south...
and South Korea
South Korea
The Republic of Korea , , is a sovereign state in East Asia, located on the southern portion of the Korean Peninsula. It is neighbored by the People's Republic of China to the west, Japan to the east, North Korea to the north, and the East China Sea and Republic of China to the south...
.