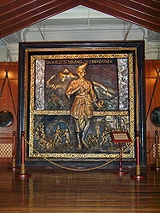 Overview
Established by the Malay
Malay people
Malays are an ethnic group of Austronesian people predominantly inhabiting the Malay Peninsula, including the southernmost parts of Thailand, the east coast of Sumatra, the coast of Borneo, and the smaller islands which lie between these locations...
ruler Parameswara, the Sultanate of Malacca was first a Hindu kingdom in 1402 and later became Muslim following the marriage of the princess of Pasai
Pasai
Pasai, also known as Samudera and Samudera-Pasai sometimes called Samudera Darussalam was a Muslim harbour kingdom on the north coast of Sumatra from the 13th to the 15th centuries CE. It was believed the word Samudera derived from Samudra meaning ocean in Sanskrit...
in 1409. Centered in the modern town of Malacca
Malacca Town
Most tourist attractions are concentrated in its small city centre which encompasses Jonker Walk which houses Malacca's traditional Chinatown that exhibits Peranakan architecture. A Famosa Fort, St. Paul Hill are among the tourist attractions located in the Bandar Hilir, old city area. There are...
, the sultanate bordered the Ayutthaya Kingdom
Ayutthaya kingdom
Ayutthaya was a Siamese kingdom that existed from 1350 to 1767. Ayutthaya was friendly towards foreign traders, including the Chinese, Vietnamese , Indians, Japanese and Persians, and later the Portuguese, Spanish, Dutch and French, permitting them to set up villages outside the walls of the...
of Siam (Thailand) in the north to Sumatra
Sumatra
Sumatra is an island in western Indonesia, westernmost of the Sunda Islands. It is the largest island entirely in Indonesia , and the sixth largest island in the world at 473,481 km2 with a population of 50,365,538...
in the southwest. The Portuguese invaded its capital in 1511 and in 1528. In the aftermath the Sultanate of Johor was established by the Malaccan prince Alauddin Riayat Shah II
Alauddin Riayat Shah II of Johor
Sultan Alauddin Riayat Shah II was the first Sultan of Johor. He ruled Johor from 1528 to 1564. He founded the Johor Sultanate following the fall of Malacca to the Portuguese in 1511. He was the second son of Mahmud Shah of Malacca. Thus, Johor was a successor state of Malacca and Johor's sultans...
as a successor state.
Parameswara
Parameswara (sultan)
Parameswara , also called Iskandar Shah or Sri Majara, was a Malay-Hindu prince from Temasek who founded the Malacca Sultanate around 1402.-Etymology:...
, founded Malacca around 1400.

What is the factors of downfall of Malay malacca sultanate?
More