Encyclopedia
Acoustic signature is used to describe a combination of acoustic emissions of ships and submarines.

The acoustic signature is made up of a number of individual elements. These include:


These emissions depend on a hull's dimensions, the installed machinery and ship's displacement. Therefore different ship class
Ship class
A ship class is a group of ships of a similar design. This is distinct from a ship-type, which might reflect a similarity of tonnage or intended use. For example, the is a nuclear aircraft carrier of the Nimitz class....
es will have different combinations of acoustic signals that together form a unique signature.

Hydrophone
Hydrophone
A hydrophone is a microphone designed to be used underwater for recording or listening to underwater sound. Most hydrophones are based on a piezoelectric transducer that generates electricity when subjected to a pressure change...
s and Sonar
Sonar
Sonar is a technique that uses sound propagation to navigate, communicate with or detect other vessels...
operating in passive mode can detect acoustic signals radiated by otherwise invisible submarines, and use these signals to target attacks.

Modern naval mine
Naval mine
A naval mine is a self-contained explosive device placed in water to destroy surface ships or submarines. Unlike depth charges, mines are deposited and left to wait until they are triggered by the approach of, or contact with, an enemy vessel...
s and torpedo
Torpedo
The modern torpedo is a self-propelled missile weapon with an explosive warhead, launched above or below the water surface, propelled underwater towards a target, and designed to detonate either on contact with it or in proximity to it.The term torpedo was originally employed for...
es such as the CAPTOR mine
CAPTOR mine
The CAPTOR is the United States Navy's primary anti-submarine naval mine. This deep-water mine is laid by ship, aircraft or submarine, and is anchored to the ocean floor. When its sonar detects a hostile submarine, the CAPTOR launches a Mark 46 torpedo.The name CAPTOR is short for enCAPsulated...
can be programmed to distinguish the acoustic signatures of different vessels, leaving friendly vessels unmolested and attacking high-value targets when faced with multiple possible targets, e.g. distinguishing an aircraft carrier from its escorts.

The acoustic signature can be reduced by 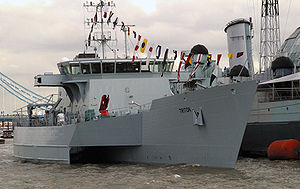 For a time the Royal Navy
Royal Navy
The Royal Navy is the naval warfare service branch of the British Armed Forces. Founded in the 16th century, it is the oldest service branch and is known as the Senior Service...
toyed with the idea of the trimaran
Trimaran
A trimaran is a multihulled boat consisting of a main hull and two smaller outrigger hulls , attached to the main hull with lateral struts...
hulled Future Surface Combatant
Future Surface Combatant
The Global Combat Ship is a ship design and construction programme currently underway by the United Kingdom's Ministry of Defence to replace the Royal Navy's 13 Type 23 frigates. The programme has been in development since 1998, initially under the designation "Future Surface Combatant "...
. These would have had a very low acoustic signature. With three blade like hulls these ships would have cut through the water with a minimum of hydrodynamic noise. Radiated mechanical noise would also be minimised by using propulsor
Propulsor
A propulsor is a mechanical device that gives propulsion. The word is commonly used in the marine vernacular, and implies a mechanical assembly that is more complicated than a propeller. The Kort nozzle and Pump-jet are examples....
s powered by a diesel-electric
Diesel-electric
Diesel-electric transmission or diesel-electric powertrain is used by a number of vehicle and ship types for providing locomotion.A diesel-electric transmission system includes a diesel engine connected to an electrical generator, creating electricity that powers electric traction motors...
power plant; with the diesels being placed in the superstructure to mechanically isolate them from the water. This project got as far as the construction of the research ship RV Triton
RV Triton
The Research Vessel Triton is a trimaran vessel owned by Gardline Marine Sciences Limited and a former prototype British warship demonstrator for the UK's Defence Evaluation and Research Agency...
to test the principle of a large scale trimaran design.