The Staatliche Antikensammlungen (State Collections of Antiques) in the Kunstareal
Kunstareal
The Kunstareal is a museum quarter in the city centre of Munich, Germany.It consists of the three "Pinakotheken" galleries , the Glyptothek, the Staatliche Antikensammlung , the Lenbachhaus, the Museum Brandhorst and...
of Munich
Munich
Munich The city's motto is "" . Before 2006, it was "Weltstadt mit Herz" . Its native name, , is derived from the Old High German Munichen, meaning "by the monks' place". The city's name derives from the monks of the Benedictine order who founded the city; hence the monk depicted on the city's coat...
is a museum for the Bavaria
Bavaria
Bavaria, formally the Free State of Bavaria is a state of Germany, located in the southeast of Germany. With an area of , it is the largest state by area, forming almost 20% of the total land area of Germany...
n state's antique collections for Greek
Greek art
Greek art began in the Cycladic and Minoan prehistorical civilization, and gave birth to Western classical art in the ancient period...
, Etruscan
Etruscan civilization
Etruscan civilization is the modern English name given to a civilization of ancient Italy in the area corresponding roughly to Tuscany. The ancient Romans called its creators the Tusci or Etrusci...
and Roman art
Roman art
Roman art has the visual arts made in Ancient Rome, and in the territories of the Roman Empire. Major forms of Roman art are architecture, painting, sculpture and mosaic work...
. The Bavarian state collection of Ancient Egyptian art
Art of Ancient Egypt
Ancient Egyptian art is the painting, sculpture, architecture and other arts produced by the civilization in the lower Nile Valley from 5000 BC to 300 AD. Ancient Egyptian art reached a high level in painting and sculpture, and was both highly stylized and symbolic...
is traditionally placed in its own museum
Staatliche Sammlung für Ägyptische Kunst
The Staatliches Museum Ägyptischer Kunst in Munich is the Bavarian State Collection for Ancient Egypt art. It displays exhibits from all periods of Ancient Egypt's history. The associated small Middle East section displays objects from the areas of Assyrian and Babylonian culture...
. This museum is also complemented by the sculptures collection, which is located in the opposite Glyptothek
Glyptothek
The Glyptothek is a museum in Munich, Germany, which was commissioned by the Bavarian King Ludwig I to house his collection of Greek and Roman sculptures . It was designed by Leo von Klenze in the Neoclassical style, and built from 1816 to 1830...
.


History of the building

The neo-classical
Classicism
Classicism, in the arts, refers generally to a high regard for classical antiquity, as setting standards for taste which the classicists seek to emulate. The art of classicism typically seeks to be formal and restrained: of the Discobolus Sir Kenneth Clark observed, "if we object to his restraint...
building at Königsplatz
Königsplatz
Königsplatz is a square in Munich, Germany.-Architecture:The square was designed with the creation of the Brienner Straße at the command of Crown Prince Ludwig of Bavaria by Karl von Fischer and laid out by Leo von Klenze....
with Corinthian columns
Corinthian order
The Corinthian order is one of the three principal classical orders of ancient Greek and Roman architecture. The other two are the Doric and Ionic. When classical architecture was revived during the Renaissance, two more orders were added to the canon, the Tuscan order and the Composite order...
was established in 1848 as counterpart to the opposite Glyptothek
Glyptothek
The Glyptothek is a museum in Munich, Germany, which was commissioned by the Bavarian King Ludwig I to house his collection of Greek and Roman sculptures . It was designed by Leo von Klenze in the Neoclassical style, and built from 1816 to 1830...
and commissioned by the Bavarian King Ludwig I
Ludwig I of Bavaria
Ludwig I was a German king of Bavaria from 1825 until the 1848 revolutions in the German states.-Crown prince:...
. The architect was Georg Friedrich Ziebland. Already from 1869 to 1872 the building housed the royal antiquarium before the Munich Secession resided here from 1898 to 1912. From 1919 the building contained the New State Gallery. The museum building was severely damaged by bombing in World War II
World War II
World War II, or the Second World War , was a global conflict lasting from 1939 to 1945, involving most of the world's nations—including all of the great powers—eventually forming two opposing military alliances: the Allies and the Axis...
but was reconstructed and reopened to the public in the late 1960s to display the State Collection of Antiques. 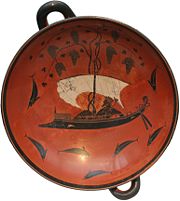 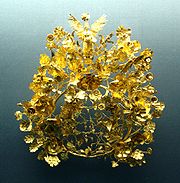 The State Collection of Antiques based on the Wittelsbach
Wittelsbach
The Wittelsbach family is a European royal family and a German dynasty from Bavaria.Members of the family served as Dukes, Electors and Kings of Bavaria , Counts Palatine of the Rhine , Margraves of Brandenburg , Counts of Holland, Hainaut and Zeeland , Elector-Archbishops of Cologne , Dukes of...
antique collections, especially the collection of attic vases of King Ludwig I.
In 1831 his agent Martin von Wagner acquired pottery from the archeological excavation in Vulci, his agent Friedrich von Thiersch purchased by auction the antiques from the estate of Lucien Bonaparte
Lucien Bonaparte
Lucien Bonaparte, Prince Français, 1st Prince of Canino and Musignano , born Luciano Buonaparte, was the third surviving son of Carlo Buonaparte and his wife Letizia Ramolino....
. The king acquired also antique gold jewellery from the collection of Caroline Murat
Caroline Bonaparte
Maria Annunziata Carolina Murat , better known as Caroline Bonaparte, was the seventh surviving child and third surviving daughter of Carlo Buonaparte and Letizia Ramolino and a younger sister of Napoleon I of France...
, Etruscan bronzes excavated in Perugia
Perugia
Perugia is the capital city of the region of Umbria in central Italy, near the River Tiber, and the capital of the province of Perugia. The city is located about north of Rome. It covers a high hilltop and part of the valleys around the area....
and Greek terra-cottas from South Italy.

After the king's death in 1868 his collection was united with the Wittelsbach antique collection which was founded already by Albert V, Duke of Bavaria
Albert V, Duke of Bavaria
Albert V was Duke of Bavaria from 1550 until his death. He was born in Munich to William IV and Marie Jacobaea of Baden.-Early life:Albert was educated at Ingolstadt under good Catholic teachers...
. Later the museum got extended by purchase and donations. Among these private collections are the donations of Paul Arndt
Paul Arndt
Paul Julius Arndt was a German classical archaeologist who was a native of Dresden.He studied classical art under Johannes Overbeck at the University of Leipzig, and classical archeology with Heinrich Brunn at the University of Munich...
(1908), of James Loeb
James Loeb
James Loeb was a Jewish-German-American banker and philanthropist.He was the second born son of Solomon Loeb and Betty Loeb.James Loeb joined his father at Kuhn, Loeb & Co...
(1933), and of Hans von Schoen (1964). These comprehensive collections specialised in smaller antique objects, glassware, bronzes, terra-cottas, jewelry, gold and silver. During World War II the museum lost especially Etruscan pottery, which was stored in the bombed Neue Pinakothek
Neue Pinakothek
The Neue Pinakothek is an art museum in Munich, Germany. Its focus is European Art of the 18th and 19th century and is one of the most important museums of art of the nineteenth century in the world...
. 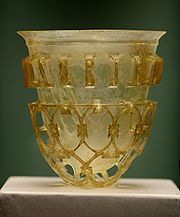 An outstanding example for antique jewellery is the gold funerary garland from Armento
Armento
Armento is a town and comune in the province of Potenza, in the Southern Italian region of Basilicata....
(4th century BC).

A famous Roman goblet from Cologne
Cologne
Cologne is Germany's fourth-largest city , and is the largest city both in the Germany Federal State of North Rhine-Westphalia and within the Rhine-Ruhr Metropolitan Area, one of the major European metropolitan areas with more than ten million inhabitants.Cologne is located on both sides of the...
made of reticella (or network) glass
Cage cup
A cage cup, Greek diatreton, also vas diatretum, plural diatreta, or "reticulated cup" is a type of luxury Late Roman glass vessel, found from roughly the 4th century, and "the pinnacle of Roman achievements in glass-making"...
(4th century AD) still shows its Latin inscription BIBE MULTIS ANNIS (Drink many years yet!). It was a present of the City of Cologne in return for King Ludwig's support for the completion of Cologne Cathedral.

Part of the Staatliche Antikensammlungen is also a comprehensive collection of ca 800 engraved gems donated by Helmut Hansmann (1924-1996).