Encyclopedia
Greek art began in the Cycladic and Minoan
Minoan civilization
The Minoan civilization was a Bronze Age civilization that arose on the island of Crete and flourished from approximately the 27th century BC to the 15th century BC. It was rediscovered at the beginning of the 20th century through the work of the British archaeologist Arthur Evans...
prehistorical civilization, and gave birth to Western classical art
Classicism
Classicism, in the arts, refers generally to a high regard for classical antiquity, as setting standards for taste which the classicists seek to emulate. The art of classicism typically seeks to be formal and restrained: of the Discobolus Sir Kenneth Clark observed, "if we object to his restraint...
in the ancient period (further developing this during the Hellenistic Period). It took in influences of Eastern civilizations and the new religion of Orthodox Christianity
Orthodox Christianity
The term Orthodox Christianity may refer to:* the Eastern Orthodox Church and its various geographical subdivisions...
in the Byzantine
Byzantine Empire
The Byzantine Empire was the Eastern Roman Empire during the periods of Late Antiquity and the Middle Ages, centred on the capital of Constantinople. Known simply as the Roman Empire or Romania to its inhabitants and neighbours, the Empire was the direct continuation of the Ancient Roman State...
era and absorbed Italian
Italy
Italy , officially the Italian Republic languages]] under the European Charter for Regional or Minority Languages. In each of these, Italy's official name is as follows:;;;;;;;;), is a unitary parliamentary republic in South-Central Europe. To the north it borders France, Switzerland, Austria and...
and Europe
Europe
Europe is, by convention, one of the world's seven continents. Comprising the westernmost peninsula of Eurasia, Europe is generally 'divided' from Asia to its east by the watershed divides of the Ural and Caucasus Mountains, the Ural River, the Caspian and Black Seas, and the waterways connecting...
an ideas during the period of Romanticism
Romanticism
Romanticism was an artistic, literary and intellectual movement that originated in the second half of the 18th century in Europe, and gained strength in reaction to the Industrial Revolution...
(with the invigoration of the Greek Revolution), right up until the Modernist and Postmodernist periods. 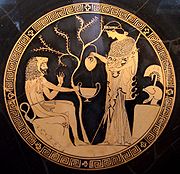 There are three scholarly distinctions of later ancient Greek art that correspond roughly with historical periods of the same names. These are the Archaic, the Classical and the Hellenistic. The Archaic period is usually dated from ca. 1000 bc. The Persian Wars of 480 BC to 448 BC are usually taken as the dividing line between the Archaic and the Classical periods, and before the death of Alexander the Great in 323 BC is regarded as separating the Classical from the Hellenistic period. Of course, different forms of art developed at different speeds in different parts of the Greek world, and varied to a degree from artist to artist. There was no sharp transition from one artistic period to another.

The art of ancient Greece has exercised an enormous influence on the culture of many countries from ancient times until the present, particularly in the areas of sculpture
Sculpture
Sculpture is three-dimensional artwork created by shaping or combining hard materials—typically stone such as marble—or metal, glass, or wood. Softer materials can also be used, such as clay, textiles, plastics, polymers and softer metals...
and architecture
Architecture
Architecture is both the process and product of planning, designing and construction. Architectural works, in the material form of buildings, are often perceived as cultural and political symbols and as works of art...
. In the West, the art of the Roman Empire
Roman Empire
The Roman Empire was the post-Republican period of the ancient Roman civilization, characterised by an autocratic form of government and large territorial holdings in Europe and around the Mediterranean....
was largely derived from Greek models. In the East, Alexander the Great's conquests initiated several centuries of exchange between Greek, Central Asian and India
India
India , officially the Republic of India , is a country in South Asia. It is the seventh-largest country by geographical area, the second-most populous country with over 1.2 billion people, and the most populous democracy in the world...
n cultures, resulting in Greco-Buddhist art
Greco-Buddhist art
Greco-Buddhist art is the artistic manifestation of Greco-Buddhism, a cultural syncretism between the Classical Greek culture and Buddhism, which developed over a period of close to 1000 years in Central Asia, between the conquests of Alexander the Great in the 4th century BCE, and the Islamic...
, with ramifications as far as Japan
Japan
Japan is an island nation in East Asia. Located in the Pacific Ocean, it lies to the east of the Sea of Japan, China, North Korea, South Korea and Russia, stretching from the Sea of Okhotsk in the north to the East China Sea and Taiwan in the south...
. Following the Renaissance
Renaissance
The Renaissance was a cultural movement that spanned roughly the 14th to the 17th century, beginning in Italy in the Late Middle Ages and later spreading to the rest of Europe. The term is also used more loosely to refer to the historical era, but since the changes of the Renaissance were not...
in Europe
Europe
Europe is, by convention, one of the world's seven continents. Comprising the westernmost peninsula of Eurasia, Europe is generally 'divided' from Asia to its east by the watershed divides of the Ural and Caucasus Mountains, the Ural River, the Caspian and Black Seas, and the waterways connecting...
, the humanist
Humanism
Humanism is an approach in study, philosophy, world view or practice that focuses on human values and concerns. In philosophy and social science, humanism is a perspective which affirms some notion of human nature, and is contrasted with anti-humanism....
aesthetic and the high technical standards of Greek art inspired generations of European artists.

Byzantine art grew from the art of ancient Greece and, at least before 1453, never lost sight of its classical heritage, but was distinguished from it in a number of ways. The most profound of these was that the humanist ethic of ancient Greek art was replaced by the Christian ethic. If the purpose of classical art was the glorification of man, the purpose of Byzantine art was the glorification of God.

In place of the nude, the figures of God the Father, Jesus Christ, the Virgin Mary and the saints and martyrs of Christian tradition were elevated and became the dominant - indeed almost exclusive - focus of Byzantine art. One of the most important forms of Byzantine art was, and still is, the icon: an image of Christ, the Virgin (particularly the Virgin and Child), or a saint, used as an object of veneration in Orthodox churches and private homes.

The Heptanese School of painting succeeded the Cretan school as the leading school of Greek post-Byzantine painting after Crete fell to the Ottomans
Ottoman Empire
The Ottoman EmpireIt was usually referred to as the "Ottoman Empire", the "Turkish Empire", the "Ottoman Caliphate" or more commonly "Turkey" by its contemporaries...
in 1669. Like the Cretan school it combined Byzantine traditions with an increasing Western European artistic influence, and also saw the first significant depiction of secular subjects. The school was based in the Ionian islands
Ionian Islands
The Ionian Islands are a group of islands in Greece. They are traditionally called the Heptanese, i.e...
, which were not part of Ottoman Greece, from the middle of the 17th century until the middle of the 19th century.

Modern Greek art, after the independence
Greek War of Independence
The Greek War of Independence, also known as the Greek Revolution was a successful war of independence waged by the Greek revolutionaries between...
and the creation of the modern Greek state, began to be developed around the time of Romanticism
Romanticism
Romanticism was an artistic, literary and intellectual movement that originated in the second half of the 18th century in Europe, and gained strength in reaction to the Industrial Revolution...
and the Greek artists absorbed many elements from their European colleagues, resulting in the culmination of the distinctive style of Greek Romantic art.

Theodoros Stamos
Theodoros Stamos
Theodoros Stamos , was a Greek American artist. He is one of the youngest painters of the original group of abstract expressionist painters , which included Jackson Pollock, Willem de Kooning and Mark Rothko...
(1922–1997) was a great abstract expressionist
Abstract expressionism
Abstract expressionism was an American post–World War II art movement. It was the first specifically American movement to achieve worldwide influence and put New York City at the center of the western art world, a role formerly filled by Paris...
painter from Lefkada
Lefkada
Lefkada, or Leucas or Leucadia , is a Greek island in the Ionian Sea on the west coast of Greece, connected to the mainland by a long causeway and floating bridge. The principal town of the island and seat of the municipality is Lefkada . It is situated on the northern part of the island,...
that lived and worked in New York
New York
New York is a state in the Northeastern region of the United States. It is the nation's third most populous state. New York is bordered by New Jersey and Pennsylvania to the south, and by Connecticut, Massachusetts and Vermont to the east...
in the 40s and 50s. His work has been exhibited throughout the world, and can be found in major museum collections such as the Whitney Museum of Art, the Guggenheim Museum
Solomon R. Guggenheim Museum
The Solomon R. Guggenheim Museum is a well-known museum located on the Upper East Side of Manhattan in New York City, United States. It is the permanent home to a renowned collection of Impressionist, Post-Impressionist, early Modern, and contemporary art and also features special exhibitions...
, Smithsonian and the National Gallery of Art
National Gallery of Art
The National Gallery of Art and its Sculpture Garden is a national art museum, located on the National Mall between 3rd and 9th Streets at Constitution Avenue NW, in Washington, DC...
in Washington, D.C.
Washington, D.C.
Washington, D.C., formally the District of Columbia and commonly referred to as Washington, "the District", or simply D.C., is the capital of the United States. On July 16, 1790, the United States Congress approved the creation of a permanent national capital as permitted by the U.S. Constitution....