Encyclopedia
The Church of St. Michael in Hildesheim
Hildesheim
Hildesheim is a city in Lower Saxony, Germany. It is located in the district of Hildesheim, about 30 km southeast of Hanover on the banks of the Innerste river, which is a small tributary of the Leine river...
, Germany
Germany
Germany , officially the Federal Republic of Germany , is a federal parliamentary republic in Europe. The country consists of 16 states while the capital and largest city is Berlin. Germany covers an area of 357,021 km2 and has a largely temperate seasonal climate...
, is an early-Romanesque
Romanesque architecture
Romanesque architecture is an architectural style of Medieval Europe characterised by semi-circular arches. There is no consensus for the beginning date of the Romanesque architecture, with proposals ranging from the 6th to the 10th century. It developed in the 12th century into the Gothic style,...
church. It has been on the UNESCO
UNESCO
The United Nations Educational, Scientific and Cultural Organization is a specialized agency of the United Nations...
World Cultural Heritage list since 1985.

Abbey Church of St. Michael's was constructed between 1001 and 1031 under the direction of Bishop
Bishop
A bishop is an ordained or consecrated member of the Christian clergy who is generally entrusted with a position of authority and oversight. Within the Catholic Church, Eastern Orthodox, Oriental Orthodox Churches, in the Assyrian Church of the East, in the Independent Catholic Churches, and in the...
Bernward of Hildesheim
Bernward of Hildesheim
Saint Bern[w]ard was the Bishop of Hildesheim from 993 until his death in 1022.Bernward came from a Saxon noble family and studied at the cathedral school of Hildesheim...
(993-1022) as the chapel of his Benedictine
Benedictine
Benedictine refers to the spirituality and consecrated life in accordance with the Rule of St Benedict, written by Benedict of Nursia in the sixth century for the cenobitic communities he founded in central Italy. The most notable of these is Monte Cassino, the first monastery founded by Benedict...
monastery
Monastery
Monastery denotes the building, or complex of buildings, that houses a room reserved for prayer as well as the domestic quarters and workplace of monastics, whether monks or nuns, and whether living in community or alone .Monasteries may vary greatly in size – a small dwelling accommodating only...
. Bernward named the church after the archangel Michael, the Christian
Christian
A Christian is a person who adheres to Christianity, an Abrahamic, monotheistic religion based on the life and teachings of Jesus of Nazareth as recorded in the Canonical gospels and the letters of the New Testament...
angel
Angel
Angels are mythical beings often depicted as messengers of God in the Hebrew and Christian Bibles along with the Quran. The English word angel is derived from the Greek ἄγγελος, a translation of in the Hebrew Bible ; a similar term, ملائكة , is used in the Qur'an...
of protection who carries the deceased to heaven, because he planned to be buried in the Michaeliskirche. Bernward's plans were spoiled by his death in 1022, eleven years before the completion and consecration of the church in 1033. Bernward's successor, Godehard, transferred Bernward's remains to the crypt
Crypt
In architecture, a crypt is a stone chamber or vault beneath the floor of a burial vault possibly containing sarcophagi, coffins or relics....
following its completion. 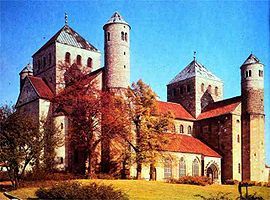 In 1186, after a reconstruction following a fire, Hildesheim's Bishop Adelog of Dorstedt - assisted by Tammo, Prince-Bishop of Verden - reconsecrated St. Michael's.

When the Reformation
Protestant Reformation
The Protestant Reformation was a 16th-century split within Western Christianity initiated by Martin Luther, John Calvin and other early Protestants. The efforts of the self-described "reformers", who objected to the doctrines, rituals and ecclesiastical structure of the Roman Catholic Church, led...
was adopted in Hildesheim in 1542, St. Michael's Church became Lutheran, but the Benedictine monastery remained existing until it was secularized in 1803. The monks would still use the church and its crypt, which remain Catholic
Catholic
The word catholic comes from the Greek phrase , meaning "on the whole," "according to the whole" or "in general", and is a combination of the Greek words meaning "about" and meaning "whole"...
to this day.

St. Michael's Church was destroyed in an air raid
Airstrike
An air strike is an attack on a specific objective by military aircraft during an offensive mission. Air strikes are commonly delivered from aircraft such as fighters, bombers, ground attack aircraft, attack helicopters, and others...
during World War II
World War II
World War II, or the Second World War , was a global conflict lasting from 1939 to 1945, involving most of the world's nations—including all of the great powers—eventually forming two opposing military alliances: the Allies and the Axis...
on 22 March 1945
Bombing of Hildesheim in World War II
The German city of Hildesheim, ca. 30 kilometres south of Hanover was target of several Allied air raids in 1945.-Hildesheim during World War II:In 1939, Hildesheim had about 72,000 inhabitants...
, but reconstruction was begun in 1950 and completed in 1957. In 1985, the church became a UNESCO World Cultural Heritage site, along with the Cathedral of Hildesheim
St. Mary's Cathedral, Hildesheim
St. Mary's Cathedral in Hildesheim, Germany, is an important medieval Catholic cathedral, that has been on the UNESCO World Cultural Heritage list since 1985....
, its collection of medieval treasures and its 1000-year old rosebush.

St. Michael's Church is one of the most important churches in Ottonic (Early-Romanesque) style
Ottonian Renaissance
The Ottonian Renaissance was a limited "renaissance" of economy and art in central and southern Europe that accompanied the reigns of the first three emperors of the Saxon Dynasty, all named Otto: Otto I , Otto II , and Otto III , and which in large part depended upon their patronage.One of three ...
. It is a double-choir basilica
Basilica
The Latin word basilica , was originally used to describe a Roman public building, usually located in the forum of a Roman town. Public basilicas began to appear in Hellenistic cities in the 2nd century BC.The term was also applied to buildings used for religious purposes...
with two transept
Transept
For the periodical go to The Transept.A transept is a transverse section, of any building, which lies across the main body of the building. In Christian churches, a transept is an area set crosswise to the nave in a cruciform building in Romanesque and Gothic Christian church architecture...
s and a square tower at each crossing
Crossing (architecture)
A crossing, in ecclesiastical architecture, is the junction of the four arms of a cruciform church.In a typically oriented church , the crossing gives access to the nave on the west, the transept arms on the north and south, and the choir on the east.The crossing is sometimes surmounted by a tower...
. The west choir
Choir
A choir, chorale or chorus is a musical ensemble of singers. Choral music, in turn, is the music written specifically for such an ensemble to perform.A body of singers who perform together as a group is called a choir or chorus...
is emphasized by an ambulatory
Ambulatory
The ambulatory is the covered passage around a cloister. The term is sometimes applied to the procession way around the east end of a cathedral or large church and behind the high altar....
and a crypt
Crypt
In architecture, a crypt is a stone chamber or vault beneath the floor of a burial vault possibly containing sarcophagi, coffins or relics....
. The ground plan of the building follows a geometrical conception, in which the square of the transept crossing in the ground plan constitutes the key measuring unit for the entire church. The square units are defined by the "double" alteration of columns and piers.
There are 2 entrances on the each apse, and 4 entrances on the north and south side of the church.

Beside the choir
Choir
A choir, chorale or chorus is a musical ensemble of singers. Choral music, in turn, is the music written specifically for such an ensemble to perform.A body of singers who perform together as a group is called a choir or chorus...
and the cloister
Cloister
A cloister is a rectangular open space surrounded by covered walks or open galleries, with open arcades on the inner side, running along the walls of buildings and forming a quadrangle or garth...
, the painted wooden ceiling (around 1230) is most famous of the Church's interior. It shows the genealogical tree of Jesus Christ. Bishop Bernward wanted to construct the pillars of the nave
Nave
In Romanesque and Gothic Christian abbey, cathedral basilica and church architecture, the nave is the central approach to the high altar, the main body of the church. "Nave" was probably suggested by the keel shape of its vaulting...
in the Niedersächsischer Stützenwechsel style, which means square pillars alternating with round ones. Above them, the wall closes with the clerestory
Clerestory
Clerestory is an architectural term that historically denoted an upper level of a Roman basilica or of the nave of a Romanesque or Gothic church, the walls of which rise above the rooflines of the lower aisles and are pierced with windows. In modern usage, clerestory refers to any high windows...
, whose round arch windows attract the light from outside. Furthermore, light shines through the Gothic
Gothic architecture
Gothic architecture is a style of architecture that flourished during the high and late medieval period. It evolved from Romanesque architecture and was succeeded by Renaissance architecture....
windows of the lower aisle
Aisle
An aisle is, in general, a space for walking with rows of seats on both sides or with rows of seats on one side and a wall on the other...
s beyond the arcade
Arcade (architecture)
An arcade is a succession of arches, each counterthrusting the next, supported by columns or piers or a covered walk enclosed by a line of such arches on one or both sides. In warmer or wet climates, exterior arcades provide shelter for pedestrians....
. Their ceilings are stone vaults
Vault (architecture)
A Vault is an architectural term for an arched form used to provide a space with a ceiling or roof. The parts of a vault exert lateral thrust that require a counter resistance. When vaults are built underground, the ground gives all the resistance required...
.

St. Michael's Church is situated at the Western rim of the city centre of Hildesheim, on the so-called Michaelishügel ("St. Michael's Hill"). The main entrance to the Church is at the south side. Behind the Church, there is a garden called monastery garden. The cloister is also accessible from there. It leads to the Church's contemporary (administrative) buildings. In the south and east of the Hill you reach Hildesheim's downtown, in the west of it there is the River Innerste
Innerste
The Innerste is a river in Lower Saxony, Germany. It is a right tributary of the Leine river and 95 km in length.- Origin of the name :...
and in the north the Gymnasium Andreanum school.