Encyclopedia
Clerestory is an architectural
Architecture
Architecture is both the process and product of planning, designing and construction. Architectural works, in the material form of buildings, are often perceived as cultural and political symbols and as works of art...
term that historically denoted an upper level of a Roman basilica
Basilica
The Latin word basilica , was originally used to describe a Roman public building, usually located in the forum of a Roman town. Public basilicas began to appear in Hellenistic cities in the 2nd century BC.The term was also applied to buildings used for religious purposes...
or of the nave
Nave
In Romanesque and Gothic Christian abbey, cathedral basilica and church architecture, the nave is the central approach to the high altar, the main body of the church. "Nave" was probably suggested by the keel shape of its vaulting...
of a Romanesque
Romanesque architecture
Romanesque architecture is an architectural style of Medieval Europe characterised by semi-circular arches. There is no consensus for the beginning date of the Romanesque architecture, with proposals ranging from the 6th to the 10th century. It developed in the 12th century into the Gothic style,...
or Gothic
Gothic architecture
Gothic architecture is a style of architecture that flourished during the high and late medieval period. It evolved from Romanesque architecture and was succeeded by Renaissance architecture....
church, the walls of which rise above the rooflines of the lower aisle
Aisle
An aisle is, in general, a space for walking with rows of seats on both sides or with rows of seats on one side and a wall on the other...
s and are pierced with windows. In modern usage, clerestory refers to any high windows above eye level. In either case, the purpose is to bring outside light, fresh air, or both into the inner space.

The technology of the clerestory appears to originate in the temples
Egyptian temple
Egyptian temples were built for the official worship of the gods and commemoration of pharaohs in Ancient Egypt and in regions under Egyptian control. These temples were seen as houses for the gods or kings to whom they were dedicated...
of ancient Egypt
Ancient Egypt
Ancient Egypt was an ancient civilization of Northeastern Africa, concentrated along the lower reaches of the Nile River in what is now the modern country of Egypt. Egyptian civilization coalesced around 3150 BC with the political unification of Upper and Lower Egypt under the first pharaoh...
. The term "clerestory" is applicable to Egyptian temples, where the lighting of the hall of columns was obtained over the stone roofs of the adjoining aisles, through slits pierced in vertical slabs of stone. Clerestory appeared in Egypt at least as early as the Amarna
Amarna
Amarna is an extensive Egyptian archaeological site that represents the remains of the capital city newly–established and built by the Pharaoh Akhenaten of the late Eighteenth Dynasty , and abandoned shortly afterwards...
period.

In the Minoan
Minoan civilization
The Minoan civilization was a Bronze Age civilization that arose on the island of Crete and flourished from approximately the 27th century BC to the 15th century BC. It was rediscovered at the beginning of the 20th century through the work of the British archaeologist Arthur Evans...
palaces of Crete
Crete
Crete is the largest and most populous of the Greek islands, the fifth largest island in the Mediterranean Sea, and one of the thirteen administrative regions of Greece. It forms a significant part of the economy and cultural heritage of Greece while retaining its own local cultural traits...
such as Knossos
Knossos
Knossos , also known as Labyrinth, or Knossos Palace, is the largest Bronze Age archaeological site on Crete and probably the ceremonial and political centre of the Minoan civilization and culture. The palace appears as a maze of workrooms, living spaces, and store rooms close to a central square...
, by contrast, lightwell
Lightwell
In architecture a lightwell, light well or air shaft is an unroofed external space provided within the volume of a large building to allow light and air to reach what would otherwise be dark or unventilated area...
s were employed in addition to clerestories.

Early Christian churches and some Byzantine churches, particularly in Italy, are based closely on the Roman Basilica, and maintained the form of a central nave
Nave
In Romanesque and Gothic Christian abbey, cathedral basilica and church architecture, the nave is the central approach to the high altar, the main body of the church. "Nave" was probably suggested by the keel shape of its vaulting...
flanked by lower aisles on each side. The nave and aisles are separated by columns or piers, above which rises a wall pierced by clerestory windows.

During the Romanesque period, many churches of the basilica form were constructed all over Europe. Many of these churches have wooden roofs with clerestories below them. Some Romanesque churches have barrel vaulted ceilings with no clerestory. The development of the groin vault
Groin vault
A groin vault or groined vault is produced by the intersection at right angles of two barrel vaults. The word groin refers to the edge between the intersecting vaults; cf. ribbed vault. Sometimes the arches of groin vaults are pointed instead of round...
and ribbed vault made possible the insertion of clerestory windows.

Initially the nave of a large aisled and clerestoried church was of two levels, arcade and clerestory. During the Romanesque period a third level was inserted between them, a gallery called the "triforium
Triforium
A triforium is a shallow arched gallery within the thickness of inner wall, which stands above the nave of a church or cathedral. It may occur at the level of the clerestory windows, or it may be located as a separate level below the clerestory. It may itself have an outer wall of glass rather than...
". The triforium generally opens into space beneath the sloping roof of the aisle. This became a standard feature of later Romanesque and Gothic large abbey and cathedral churches. Sometimes another gallery set into the wall space above the triforium and below the clerestory. This feature is found in some late Romanesque and early Gothic buildings in France.

In smaller churches, clerestory windows may be quatrefoil
Quatrefoil
The word quatrefoil etymologically means "four leaves", and applies to general four-lobed shapes in various contexts.-In heraldry:In heraldic terminology, a quatrefoil is a representation of a flower with four petals, or a leaf with four leaflets . It is sometimes shown "slipped", i.e. with an...
s or spherical triangle
Triangle
A triangle is one of the basic shapes of geometry: a polygon with three corners or vertices and three sides or edges which are line segments. A triangle with vertices A, B, and C is denoted ....
s (triangles whose edges are arcs of a circle). In some Italian churches they are ocular. In most large churches they are an important feature, both for beauty and utility. The ribbed vaulting and flying buttress
Flying buttress
A flying buttress is a specific form of buttressing most strongly associated with Gothic church architecture. The purpose of any buttress is to resist the lateral forces pushing a wall outwards by redirecting them to the ground...
es of Gothic architecture concentrated the weight and thrust of the roof, freeing wall-space for larger clerestory fenestration. In Gothic churches, the clerestory is generally divided into bays
Bay (architecture)
A bay is a unit of form in architecture. This unit is defined as the zone between the outer edges of an engaged column, pilaster, or post; or within a window frame, doorframe, or vertical 'bas relief' wall form.-Defining elements:...
by the vaulting shafts that continue the same tall columns that form the arcade separating the aisles from the nave. 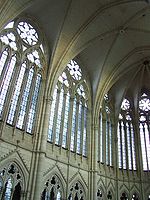 The tendency from the early Romanesque period to the late Gothic period was for the clerestory level to become progressively taller and the size of the windows to get proportionally larger in relation to wall surface.

By extension, "clerestory lights" are any rows of windows above eye level that allow light into a space. In modern architecture, clerestories provide light without distractions of a view or compromising privacy. Factory buildings are often built with clerestory windows; modern housing designs sometimes include them as well. Another example is the new Crosby Theatre of the Santa Fe Opera
Santa Fe Opera
The Santa Fe Opera is an American opera company, located north of Santa Fe in the U.S. state of New Mexico, headquartered on a former guest ranch of .-General history:...
where the front and rear portions of the roof are joined by a clerestory window.
Paolo Soleri
Paolo Soleri
Paolo Soleri is an Italian-American architect. He established Arcosanti and the educational Cosanti Foundation. Soleri is a lecturer in the College of Architecture at Arizona State University and a National Design Award recipient in 2006.-Early life:Soleri was born in Turin, Italy...
uses clerestories in his work, calling them light scoops.

The word "clerestory" is also used to denote a style of railway rolling stock (predominantly passenger), for example the Great Western Railway
Great Western Railway
The Great Western Railway was a British railway company that linked London with the south-west and west of England and most of Wales. It was founded in 1833, received its enabling Act of Parliament in 1835 and ran its first trains in 1838...
Clerestory carriage of the Victorian era had the windows in the roof 'cupola' which provided access to, and ventilation for, the vehicle's gas lighting.