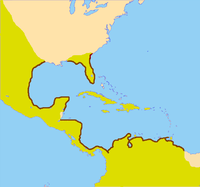 In the days of the Spanish New World Empire
Spanish Empire
The Spanish Empire comprised territories and colonies administered directly by Spain in Europe, in America, Africa, Asia and Oceania. It originated during the Age of Exploration and was therefore one of the first global empires. At the time of Habsburgs, Spain reached the peak of its world power....
, the mainland of the American continent enclosing the Caribbean Sea
Caribbean Sea
The Caribbean Sea is a sea of the Atlantic Ocean located in the tropics of the Western hemisphere. It is bounded by Mexico and Central America to the west and southwest, to the north by the Greater Antilles, and to the east by the Lesser Antilles....
and the Gulf of Mexico
Gulf of Mexico
The Gulf of Mexico is a partially landlocked ocean basin largely surrounded by the North American continent and the island of Cuba. It is bounded on the northeast, north and northwest by the Gulf Coast of the United States, on the southwest and south by Mexico, and on the southeast by Cuba. In...
was referred to as the Spanish Main. It included present-day Florida
Florida
Florida is a state in the southeastern United States, located on the nation's Atlantic and Gulf coasts. It is bordered to the west by the Gulf of Mexico, to the north by Alabama and Georgia and to the east by the Atlantic Ocean. With a population of 18,801,310 as measured by the 2010 census, it...
, the east shore of the Gulf of Mexico in Texas
Texas
Texas is the second largest U.S. state by both area and population, and the largest state by area in the contiguous United States.The name, based on the Caddo word "Tejas" meaning "friends" or "allies", was applied by the Spanish to the Caddo themselves and to the region of their settlement in...
, Mexico
Mexico
The United Mexican States , commonly known as Mexico , is a federal constitutional republic in North America. It is bordered on the north by the United States; on the south and west by the Pacific Ocean; on the southeast by Guatemala, Belize, and the Caribbean Sea; and on the east by the Gulf of...
, Central America
Central America
Central America is the central geographic region of the Americas. It is the southernmost, isthmian portion of the North American continent, which connects with South America on the southeast. When considered part of the unified continental model, it is considered a subcontinent...
and the north coast of South America
South America
South America is a continent situated in the Western Hemisphere, mostly in the Southern Hemisphere, with a relatively small portion in the Northern Hemisphere. The continent is also considered a subcontinent of the Americas. It is bordered on the west by the Pacific Ocean and on the north and east...
. In particular, the term is most strongly associated with that stretch of the Caribbean
Caribbean
The Caribbean is a crescent-shaped group of islands more than 2,000 miles long separating the Gulf of Mexico and the Caribbean Sea, to the west and south, from the Atlantic Ocean, to the east and north...
coastline that runs from the ports of Porto Bello on the Isthmus of Darien, through Cartagena de Indias in New Granada
Viceroyalty of New Granada
The Viceroyalty of New Granada was the name given on 27 May 1717, to a Spanish colonial jurisdiction in northern South America, corresponding mainly to modern Colombia, Ecuador, Panama, and Venezuela. The territory corresponding to Panama was incorporated later in 1739...
, and Maracaibo
Maracaibo
Maracaibo is a city and municipality located in northwestern Venezuela off the western coast of the Lake Maracaibo. It is the second-largest city in the country after the national capital Caracas and the capital of Zulia state...
to the Orinoco delta. Veracruz in New Spain
New Spain
New Spain, formally called the Viceroyalty of New Spain , was a viceroyalty of the Spanish colonial empire, comprising primarily territories in what was known then as 'América Septentrional' or North America. Its capital was Mexico City, formerly Tenochtitlan, capital of the Aztec Empire...
was another major port.

From the 16th to the early 19th century, the Spanish Main was the point of departure for enormous wealth that was shipped back to Spain in the form of gold
Gold
Gold is a chemical element with the symbol Au and an atomic number of 79. Gold is a dense, soft, shiny, malleable and ductile metal. Pure gold has a bright yellow color and luster traditionally considered attractive, which it maintains without oxidizing in air or water. Chemically, gold is a...
, silver
Silver
Silver is a metallic chemical element with the chemical symbol Ag and atomic number 47. A soft, white, lustrous transition metal, it has the highest electrical conductivity of any element and the highest thermal conductivity of any metal...
, gem
Gemstone
A gemstone or gem is a piece of mineral, which, in cut and polished form, is used to make jewelry or other adornments...
s, spice
Spice
A spice is a dried seed, fruit, root, bark, or vegetative substance used in nutritionally insignificant quantities as a food additive for flavor, color, or as a preservative that kills harmful bacteria or prevents their growth. It may be used to flavour a dish or to hide other flavours...
s, hardwood
Hardwood
Hardwood is wood from angiosperm trees . It may also be used for those trees themselves: these are usually broad-leaved; in temperate and boreal latitudes they are mostly deciduous, but in tropics and subtropics mostly evergreen.Hardwood contrasts with softwood...
s, hides
Hides
A hide is an animal skin treated for human use. Hides include leather from cattle and other livestock animals, alligator skins, snake skins for shoes and fashion accessories and furs from wild cats, mink and bears. In some areas, leather is produced on a domestic or small industrial scale, but most...
and other riches. Silver
Silver
Silver is a metallic chemical element with the chemical symbol Ag and atomic number 47. A soft, white, lustrous transition metal, it has the highest electrical conductivity of any element and the highest thermal conductivity of any metal...
in the form of pieces of eight
Pieces of Eight
Pieces of Eight is the eighth studio album and second concept album by Styx, released September 1, 1978.The album was the band's follow-up to their Triple Platinum selling The Grand Illusion album....
was brought to the Spanish Main by llama
Llama
The llama is a South American camelid, widely used as a meat and pack animal by Andean cultures since pre-Hispanic times....
and mule
Mule
A mule is the offspring of a male donkey and a female horse. Horses and donkeys are different species, with different numbers of chromosomes. Of the two F1 hybrids between these two species, a mule is easier to obtain than a hinny...
train from Potosí
Potosí
Potosí is a city and the capital of the department of Potosí in Bolivia. It is one of the highest cities in the world by elevation at a nominal . and it was the location of the Spanish colonial mint, now the National Mint of Bolivia...
via the Pacific coast
Pacific Coast
A country's Pacific coast is the part of its coast bordering the Pacific Ocean.-The Americas:Countries on the western side of the Americas have a Pacific coast as their western border.* Geography of Canada* Geography of Chile* Geography of Colombia...
, while wares from the Far East
Far East
The Far East is an English term mostly describing East Asia and Southeast Asia, with South Asia sometimes also included for economic and cultural reasons.The term came into use in European geopolitical discourse in the 19th century,...
, that had arrived at Acapulco on the Manila Galleons
Manila Galleon
The Manila galleons or Manila-Acapulco galleons were Spanish trading ships that sailed once or twice per year across the Pacific Ocean between Manila in the Philippines, and Acapulco, New Spain . The name changed reflecting the city that the ship was sailing from...
, were also then transported overland to the Spanish Main. From there they were shipped to Spain by Spanish treasure fleet
Spanish treasure fleet
The Spanish treasure fleets was a convoy system adopted by the Spanish Empire from 1566 to 1790...
s. Due to the tremendous riches which were shipped from it, the Spanish Main was ripe territory for pirates and privateer
Privateer
A privateer is a private person or ship authorized by a government by letters of marque to attack foreign shipping during wartime. Privateering was a way of mobilizing armed ships and sailors without having to spend public money or commit naval officers...
s.