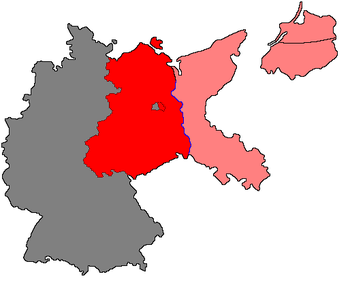 The Soviet Occupation Zone was the area of central Germany
Germany
Germany , officially the Federal Republic of Germany , is a federal parliamentary republic in Europe. The country consists of 16 states while the capital and largest city is Berlin. Germany covers an area of 357,021 km2 and has a largely temperate seasonal climate...
occupied by the Soviet Union
Soviet Union
The Soviet Union , officially the Union of Soviet Socialist Republics , was a constitutionally socialist state that existed in Eurasia between 1922 and 1991....
from 1945 on, at the end of World War II
World War II
World War II, or the Second World War , was a global conflict lasting from 1939 to 1945, involving most of the world's nations—including all of the great powers—eventually forming two opposing military alliances: the Allies and the Axis...
. On 7 October 1949 the German Democratic Republic
German Democratic Republic
The German Democratic Republic , informally called East Germany by West Germany and other countries, was a socialist state established in 1949 in the Soviet zone of occupied Germany, including East Berlin of the Allied-occupied capital city...
, which became commonly referred to as East Germany, was established in the Soviet Occupation Zone.

The SBZ was one of the four Allied occupation zones of Germany created at the end of World War II. According to the Potsdam Agreement
Potsdam Agreement
The Potsdam Agreement was the Allied plan of tripartite military occupation and reconstruction of Germany—referring to the German Reich with its pre-war 1937 borders including the former eastern territories—and the entire European Theatre of War territory...
, the Soviet Military Administration in Germany
Soviet Military Administration in Germany
The Soviet Military Administration in Germany was the Soviet military government, headquartered in Berlin-Karlshorst, that directly ruled the Soviet occupation zone of Germany from the German surrender in May 1945 until after the establishment of the German Democratic Republic in October...
(German initials: SMAD) was assigned responsibility for the (present-day) eastern portion of Germany. American
United States
The United States of America is a federal constitutional republic comprising fifty states and a federal district...
forces first occupied significant areas of what would become the Soviet zone of Germany, but ceded them to the Soviets in July 1945 according to the previously agreed upon occupation zone boundaries.

Joseph Stalin
Joseph Stalin
Joseph Vissarionovich Stalin was the Premier of the Soviet Union from 6 May 1941 to 5 March 1953. He was among the Bolshevik revolutionaries who brought about the October Revolution and had held the position of first General Secretary of the Communist Party of the Soviet Union's Central Committee...
wanted to bring all of Germany under Soviet influence, but when the West resisted this idea, he sought to create a united Germany which would be non-aligned (the "Stalin Note
Stalin Note
The Stalin Note, also known as the March Note, was a document delivered to the representatives of the Western allied powers from the Soviet Occupation in Germany on March 10, 1952...
"). When the West resisted these efforts, Stalin decided to focus his efforts on the Soviet occupation zone.

In 1945, the Soviet occupation zone consisted primarily of the central portions of Prussia
Prussia
Prussia was a German kingdom and historic state originating out of the Duchy of Prussia and the Margraviate of Brandenburg. For centuries, the House of Hohenzollern ruled Prussia, successfully expanding its size by way of an unusually well-organized and effective army. Prussia shaped the history...
. After Prussia was dissolved by the Allied powers in 1947, the area was divided between the German states (Länder) of Brandenburg
Brandenburg
Brandenburg is one of the sixteen federal-states of Germany. It lies in the east of the country and is one of the new federal states that were re-created in 1990 upon the reunification of the former West Germany and East Germany. The capital is Potsdam...
, Mecklenburg
Mecklenburg
Mecklenburg is a historical region in northern Germany comprising the western and larger part of the federal-state Mecklenburg-Vorpommern...
, Saxony
Saxony
The Free State of Saxony is a landlocked state of Germany, contingent with Brandenburg, Saxony Anhalt, Thuringia, Bavaria, the Czech Republic and Poland. It is the tenth-largest German state in area, with of Germany's sixteen states....
, Saxony-Anhalt
Saxony-Anhalt
Saxony-Anhalt is a landlocked state of Germany. Its capital is Magdeburg and it is surrounded by the German states of Lower Saxony, Brandenburg, Saxony, and Thuringia.Saxony-Anhalt covers an area of...
und Thuringia
Thuringia
The Free State of Thuringia is a state of Germany, located in the central part of the country.It has an area of and 2.29 million inhabitants, making it the sixth smallest by area and the fifth smallest by population of Germany's sixteen states....
. On 7 October 1949, the Soviet zone became the German Democratic Republic, usually referred to in English as East Germany. In 1952, the Länder were dissolved and realigned into 14 districts (Bezirke), plus the district of East Berlin
East Berlin
East Berlin was the name given to the eastern part of Berlin between 1949 and 1990. It consisted of the Soviet sector of Berlin that was established in 1945. The American, British and French sectors became West Berlin, a part strongly associated with West Germany but a free city...
.