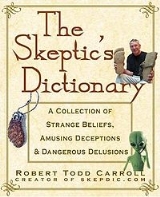 Encyclopedia
The Skeptic's Dictionary is a collection of cross-referenced skeptical
Scientific skepticism
Scientific skepticism is the practice of questioning the veracity of claims lacking empirical evidence or reproducibility, as part of a methodological norm pursuing "the extension of certified knowledge". For example, Robert K...
essays by Robert Todd Carroll
Robert Todd Carroll
Robert Todd Carroll , Ph.D., is an American writer and academic. Carroll has written several books and skeptical essays but achieved notability by publishing the Skeptic's Dictionary online in 1994.-Early life and education:...
, published on his website skepdic.com and in a printed book. The skepdic.com site was launched in 1994 and the book was published in 2003 with nearly 400 entries. As of January 2011 the website has over 700 entries. A comprehensive single-volume guides to skeptical information on pseudoscientific
Pseudoscience
Pseudoscience is a claim, belief, or practice which is presented as scientific, but which does not adhere to a valid scientific method, lacks supporting evidence or plausibility, cannot be reliably tested, or otherwise lacks scientific status...
, paranormal
Paranormal
Paranormal is a general term that designates experiences that lie outside "the range of normal experience or scientific explanation" or that indicates phenomena understood to be outside of science's current ability to explain or measure...
, and occult
Occult
The word occult comes from the Latin word occultus , referring to "knowledge of the hidden". In the medical sense it is used to refer to a structure or process that is hidden, e.g...
topics, the bibliography contains some seven hundred references for more detailed information. According to the back cover of the book, the on-line version receives approximately 500,000 hits per month.

Carroll is an atheist and "hardened skeptic" (one "who has strong disbelief about all things occult"). Carroll states that the book is not meant to present a balanced view on occult subjects – it is intended to be a small counterbalance to the voluminous occult and paranormal literature.

The articles in the book are in several categories:


Print versions are available in Dutch, English, Japanese, Korean, and Russian. Numerous entries have been translated for the Internet in several other languages. A newsletter keeps interested parties up to date on new entries and an archived list of previous newsletters is available for online perusal. Norcross et al. state that Carroll has made considerable progress in exposing pseudoscience and quackery.

According to the author,

“The Skeptic’s Dictionary is aimed at four distinct audiences: the open-minded seeker, who makes no commitment to or disavowal of occult claims; the soft skeptic, who is more prone to doubt than to believe; the hardened skeptic, who has strong disbelief about all things occult; and the believing doubter, who is prone to believe but has some doubts. The one group this book is not aimed at is the 'true believer
True-believer syndrome
True-believer syndrome is an informal or rhetorical term coined by M. Lamar Keene in his 1976 book The Psychic Mafia. Keene used the term to refer to people who continued to believe in a paranormal event or phenomenon even after it had been proven to have been staged...
' in the occult. If you have no skepticism in you, this book is not for you.”

Carroll defines each of these categories, explaining how and why, in his opinion, his dictionary may be of interest, use, and benefit to each of them. He also defines the term “skepticism” as he uses it and identifies two types of skeptic, the Apollonian, who is “committed to clarity and rationality” and the Dionysian, who is “committed to passion and instinct.” William James
William James
William James was a pioneering American psychologist and philosopher who was trained as a physician. He wrote influential books on the young science of psychology, educational psychology, psychology of religious experience and mysticism, and on the philosophy of pragmatism...
, Bertrand Russell
Bertrand Russell
Bertrand Arthur William Russell, 3rd Earl Russell, OM, FRS was a British philosopher, logician, mathematician, historian, and social critic. At various points in his life he considered himself a liberal, a socialist, and a pacifist, but he also admitted that he had never been any of these things...
, and Friedrich Nietzsche
Friedrich Nietzsche
Friedrich Wilhelm Nietzsche was a 19th-century German philosopher, poet, composer and classical philologist...
exemplify the Apollonian skeptic, Carroll says, and Charles Sanders Peirce, Tertullian
Tertullian
Quintus Septimius Florens Tertullianus, anglicised as Tertullian , was a prolific early Christian author from Carthage in the Roman province of Africa. He is the first Christian author to produce an extensive corpus of Latin Christian literature. He also was a notable early Christian apologist and...
, Søren Kierkegaard
Søren Kierkegaard
Søren Aabye Kierkegaard was a Danish Christian philosopher, theologian and religious author. He was a critic of idealist intellectuals and philosophers of his time, such as Georg Wilhelm Friedrich Hegel, Friedrich Wilhelm Joseph Schelling and Karl Wilhelm Friedrich Schlegel...
, and Blaise Pascal
Blaise Pascal
Blaise Pascal , was a French mathematician, physicist, inventor, writer and Catholic philosopher. He was a child prodigy who was educated by his father, a tax collector in Rouen...
are Dionysian skeptics.

Roy Herbert's review of the paperback version written for the New Scientist
New Scientist
New Scientist is a weekly non-peer-reviewed English-language international science magazine, which since 1996 has also run a website, covering recent developments in science and technology for a general audience. Founded in 1956, it is published by Reed Business Information Ltd, a subsidiary of...
magazine commented that "It is an amazing assembly, elegantly written and level-headed, with a wry remark here and there." and that "This superb work is likely to be used so often that it is a pity it is a softback book.".