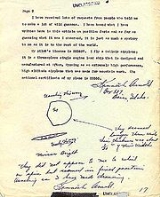 Overview
A term originally coined by the military, an unidentified flying object (usually abbreviated to UFO or U.F.O.) is an unusual apparent anomaly in the sky that is not readily identifiable to the observer as any known object. While a small percentage remain unexplained, the majority of UFO sightings are often later identified as any number of various natural phenomenon or man-made objects.
While technically a UFO refers to any unidentified flying object, in modern popular culture the term UFO has generally become synonymous with alien spacecraft.