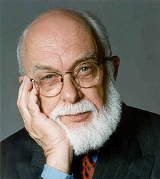 Overview
James Randi is a Canadian-American
Canadian-American
A Canadian American is someone who was born or someone who grew up in Canada then moved to the United States. The term is particularly apt when applied or self-applied to people with strong ties to Canada, such as those who have lived a significant portion of their lives in, or were educated in,...
stage magician and scientific skeptic
Scientific skepticism
Scientific skepticism is the practice of questioning the veracity of claims lacking empirical evidence or reproducibility, as part of a methodological norm pursuing "the extension of certified knowledge". For example, Robert K...
best known as a challenger of paranormal
Paranormal
Paranormal is a general term that designates experiences that lie outside "the range of normal experience or scientific explanation" or that indicates phenomena understood to be outside of science's current ability to explain or measure...
claims and pseudoscience
Pseudoscience
Pseudoscience is a claim, belief, or practice which is presented as scientific, but which does not adhere to a valid scientific method, lacks supporting evidence or plausibility, cannot be reliably tested, or otherwise lacks scientific status...
. Randi is the founder of the James Randi Educational Foundation
James Randi Educational Foundation
The James Randi Educational Foundation is a non-profit organization founded in 1996 by magician and skeptic James Randi. The JREF's mission includes educating the public and the media on the dangers of accepting unproven claims, and to support research into paranormal claims in controlled...
(JREF). Randi began his career as a magician named
Stage name
A stage name, also called a showbiz name or screen name, is a pseudonym used by performers and entertainers such as actors, wrestlers, comedians, and musicians.-Motivation to use a stage name:...
The Amazing Randi, but after retiring at age 60, he began investigating paranormal, occult
Occult
The word occult comes from the Latin word occultus , referring to "knowledge of the hidden". In the medical sense it is used to refer to a structure or process that is hidden, e.g...
, and supernatural
Supernatural
The supernatural or is that which is not subject to the laws of nature, or more figuratively, that which is said to exist above and beyond nature...
claims, which he collectively calls "woo-woo."

Although often referred to as a "debunker
Debunker
A debunker is an individual who attempts to discredit and contradict claims as being false, exaggerated or pretentious. The term is closely associated with skeptical investigation of, or in some cases irrational resistance to, controversial topics such as U.F.O.s, claimed paranormal phenomena,...
," Randi rejects that title owing to its perceived bias, instead describing himself as an "investigator." He has written about the paranormal, skepticism
Skepticism
Skepticism has many definitions, but generally refers to any questioning attitude towards knowledge, facts, or opinions/beliefs stated as facts, or doubt regarding claims that are taken for granted elsewhere...
, and the history of magic.