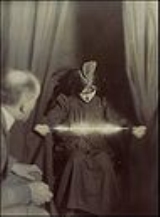 Overview
Paranormal is a general term (coined ca. 1915–1920) that designates experiences that lie outside "the range of normal experience
Experience
Experience as a general concept comprises knowledge of or skill in or observation of some thing or some event gained through involvement in or exposure to that thing or event....
or scientific explanation" or that indicates phenomena understood to be outside of science's current ability to explain or measure. Paranormal phenomena are distinct from certain hypothetical entities, such as dark matter
Dark matter
In astronomy and cosmology, dark matter is matter that neither emits nor scatters light or other electromagnetic radiation, and so cannot be directly detected via optical or radio astronomy...
and dark energy
Dark energy
In physical cosmology, astronomy and celestial mechanics, dark energy is a hypothetical form of energy that permeates all of space and tends to accelerate the expansion of the universe. Dark energy is the most accepted theory to explain recent observations that the universe appears to be expanding...
, only insofar as paranormal phenomena are inconsistent with the world as already understood through empirical
Empiricism
Empiricism is a theory of knowledge that asserts that knowledge comes only or primarily via sensory experience. One of several views of epistemology, the study of human knowledge, along with rationalism, idealism and historicism, empiricism emphasizes the role of experience and evidence,...
observation coupled with scientific method
Scientific method
Scientific method refers to a body of techniques for investigating phenomena, acquiring new knowledge, or correcting and integrating previous knowledge. To be termed scientific, a method of inquiry must be based on gathering empirical and measurable evidence subject to specific principles of...
ology.

Thousands of stories relating to paranormal phenomena are found in popular culture
Popular culture
Popular culture is the totality of ideas, perspectives, attitudes, memes, images and other phenomena that are deemed preferred per an informal consensus within the mainstream of a given culture, especially Western culture of the early to mid 20th century and the emerging global mainstream of the...
, folklore
Folklore
Folklore consists of legends, music, oral history, proverbs, jokes, popular beliefs, fairy tales and customs that are the traditions of a culture, subculture, or group. It is also the set of practices through which those expressive genres are shared. The study of folklore is sometimes called...
, and the recollections of individual subjects
Subject (philosophy)
In philosophy, a subject is a being that has subjective experiences, subjective consciousness or a relationship with another entity . A subject is an observer and an object is a thing observed...
.

Have any of you heard of chrystal divining as coming from the devil or other demons?
More

The whole art [of paranormal debate] thus consists of getting the charlatans to speak on the one hand and the distinguished scientists to speak on the other, provided the latter have nothing relevant to say on the subject.

If psychics were truly successful and if their results were not simply the consequence of trickery (at worse) or good interviewing skills (at best) &mdash; then why don't law enforcement agencies have psychic detective squads, a real X-files Unit, or other ways to integrate these paranormal investigative capabilites?