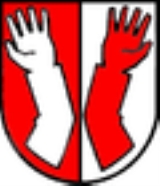 Encyclopedia
Sissach is a municipality
Municipalities of Switzerland
Communes , also known as municipalities, are the smallest government division in Switzerland, numbering 2,596 . While many have a population of a few hundred citizens, the largest cities such as Zürich or Geneva also have the legal status of municipalities...
and the capital of the district of Sissach
Sissach (district)
Sissach District is one of the five districts of the largely German-speaking canton of Basel-Country in Switzerland. It has a population of . The district occupies the western portion of Basel-Country, bordering the neighbouring cantons of canton of Aargau and Solothurn. Its capital is the town of...
in the canton
Cantons of Switzerland
The 26 cantons of Switzerland are the member states of the federal state of Switzerland. Each canton was a fully sovereign state with its own borders, army and currency from the Treaty of Westphalia until the establishment of the Swiss federal state in 1848...
of Basel-Country
Basel-Country
Basel-Landschaft , is one of the 26 cantons of Switzerland. The capital is Liestal...
in Switzerland
Switzerland
Switzerland name of one of the Swiss cantons. ; ; ; or ), in its full name the Swiss Confederation , is a federal republic consisting of 26 cantons, with Bern as the seat of the federal authorities. The country is situated in Western Europe,Or Central Europe depending on the definition....
.

Of the built up area, industrial buildings made up 2.8% of the total area while housing and buildings made up 12.4% and transportation infrastructure made up 6.3%. Power and water infrastructure as well as other special developed areas made up 1.6% of the area while parks, green belts and sports fields made up 1.9%. Out of the forested land, 45.1% of the total land area is heavily forested and 1.5% is covered with orchards or small clusters of trees. Of the agricultural land, 3.6% is used for growing crops and 16.9% is pastures, while 7.7% is used for orchards or vine crops. All the water in the municipality is flowing water.

The municipality is the capital of the district with the same name. Sissach village was originally a linear village
Linear village
In geography, a linear village, or linear settlement, is a small to medium-sized settlement that is formed around a transport route, such as a road, river, or canal. Wraysbury, a village in Berkshire, is one of the longest villages in England....
along the Ergolz
Ergolz
left|thumb|Source of the Ergolz in [[Oltingen]]The Ergolz is the main river in the canton of Basel-Landschaft. It rises on Mount Geisflue in the Faltenjura mountains in the upper region of Basel-Landschaft, on the border with Aargau and Solothurn, and joins the Rhine at Augst...
river. By the beginning of the 21st Century, it had expanded to fill the entire valley and part of the slopes around the valley. It grew along the road between the Schafmatt and Unterer Hauenstein Jura passes
Jura mountains
The Jura Mountains are a small mountain range located north of the Alps, separating the Rhine and Rhone rivers and forming part of the watershed of each...
. It includes the settlements of Itchon (first mentioned in 1226), and Gruonach and Wilmatten (both mentioned in 1446).

The blazon
Blazon
In heraldry and heraldic vexillology, a blazon is a formal description of a coat of arms, flag or similar emblem, from which the reader can reconstruct the appropriate image...
of the municipal coat of arms
Coat of arms
A coat of arms is a unique heraldic design on a shield or escutcheon or on a surcoat or tabard used to cover and protect armour and to identify the wearer. Thus the term is often stated as "coat-armour", because it was anciently displayed on the front of a coat of cloth...
is Per pale Gules and Argent, two Arms palewise counterchanged.

Most of the population speaks German
German language
German is a West Germanic language, related to and classified alongside English and Dutch. With an estimated 90 – 98 million native speakers, German is one of the world's major languages and is the most widely-spoken first language in the European Union....
(4,723 or 88.7%), with Italian language
Italian language
Italian is a Romance language spoken mainly in Europe: Italy, Switzerland, San Marino, Vatican City, by minorities in Malta, Monaco, Croatia, Slovenia, France, Libya, Eritrea, and Somalia, and by immigrant communities in the Americas and Australia...
being second most common (180 or 3.4%) and Portuguese
Portuguese language
Portuguese is a Romance language that arose in the medieval Kingdom of Galicia, nowadays Galicia and Northern Portugal. The southern part of the Kingdom of Galicia became independent as the County of Portugal in 1095...
being third (98 or 1.8%). There are 34 people who speak French
French language
French is a Romance language spoken as a first language in France, the Romandy region in Switzerland, Wallonia and Brussels in Belgium, Monaco, the regions of Quebec and Acadia in Canada, and by various communities elsewhere. Second-language speakers of French are distributed throughout many parts...
and 5 people who speak Romansh.

, there were 2,185 people who were single and never married in the municipality. There were 2,549 married individuals, 330 widows or widowers and 261 individuals who are divorced.

the average number of residents per living room was 0.55 which is about equal to the cantonal average of 0.56 per room. In this case, a room is defined as space of a housing unit of at least 4 m² (43.1 sq ft) as normal bedrooms, dining rooms, living rooms, kitchens and habitable cellars and attics. About 36.8% of the total households were owner occupied, or in other words did not pay rent (though they may have a mortgage
Mortgage loan
A mortgage loan is a loan secured by real property through the use of a mortgage note which evidences the existence of the loan and the encumbrance of that realty through the granting of a mortgage which secures the loan...
or a rent-to-own agreement).

The historical population is given in the following chart:

In the 2007 federal election
Swiss federal election, 2007
Elections to the Swiss Federal Assembly, the federal parliament of Switzerland, were held on Sunday, 21 October 2007. In a few cantons, a second round of the elections to the Council of States was held on 11 November, 18 November, and 25 November 2007...
the most popular party was the SVP
Swiss People's Party
The Swiss People's Party , also known as the Democratic Union of the Centre , is a conservative political party in Switzerland. Chaired by Toni Brunner, but spearheaded by Christoph Blocher, the party is the largest party in the Federal Assembly, with 58 members of the National Council and 6 of...
which received 26.89% of the vote. The next three most popular parties were the Green Party
Green Party of Switzerland
The Green Party of Switzerland is the fifth-largest party in the National Council of Switzerland, and the largest party that is not represented on the Federal Council.-History:...
(24.28%), the SP
Social Democratic Party of Switzerland
The Social Democratic Party of Switzerland is the largest centre-left political party in Switzerland....
(22.43%) and the FDP
FDP.The Liberals
FDP.The Liberals is a classical liberal political party in Switzerland. It is the joint-largest party in the Federal Council, third-largest party in the National Council, and second-largest in the Council of States....
(18.11%). In the federal election, a total of 2,077 votes were cast, and the voter turnout
Voter turnout
Voter turnout is the percentage of eligible voters who cast a ballot in an election . After increasing for many decades, there has been a trend of decreasing voter turnout in most established democracies since the 1960s...
was 51.8%.

the total number of full-time equivalent
Full-time equivalent
Full-time equivalent , is a unit to measure employed persons or students in a way that makes them comparable although they may work or study a different number of hours per week. FTE is often used to measure a worker's involvement in a project, or to track cost reductions in an organization...
jobs was 3,117. The number of jobs in the primary sector was 60, of which 52 were in agriculture and 7 were in forestry or lumber production. The number of jobs in the secondary sector was 1,431, of which 898 or (62.8%) were in manufacturing, 2 or (0.1%) were in mining and 516 (36.1%) were in construction. The number of jobs in the tertiary sector was 1,626. In the tertiary sector; 526 or 32.3% were in the sale or repair of motor vehicles, 53 or 3.3% were in the movement and storage of goods, 110 or 6.8% were in a hotel or restaurant, 45 or 2.8% were in the information industry, 68 or 4.2% were the insurance or financial industry, 146 or 9.0% were technical professionals or scientists, 210 or 12.9% were in education and 191 or 11.7% were in health care.

In Sissach about 2,156 or (40.5%) of the population have completed non-mandatory upper secondary education, and 762 or (14.3%) have completed additional higher education (either university or a Fachhochschule
Fachhochschule
A Fachhochschule or University of Applied Sciences is a German type of tertiary education institution, sometimes specialized in certain topical areas . Fachhochschulen were founded in Germany and later adopted by Austria, Liechtenstein, Switzerland and Greece...
). Of the 762 who completed tertiary schooling, 68.9% were Swiss men, 20.1% were Swiss women, 7.1% were non-Swiss men and 3.9% were non-Swiss women.

, there were 572 students in Sissach who came from another municipality, while 177 residents attended schools outside the municipality.